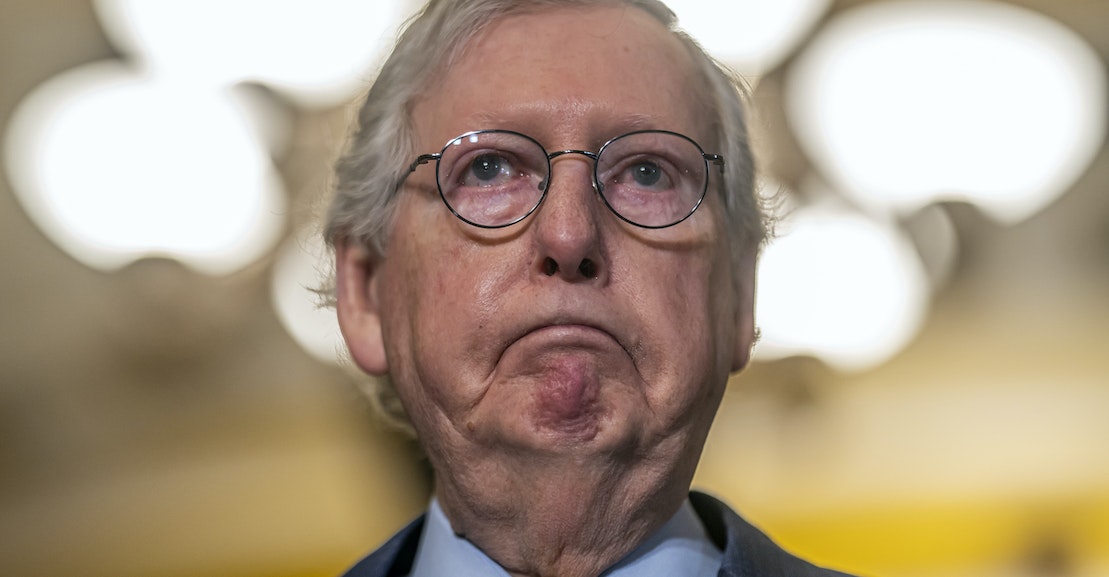 As the 118th Congress convened, public attention understandably
focused on the spectacle in the House of Representatives, as Kevin McCarthy
struggled through four days and 15 rounds of voting before winning the votes to
succeed Nancy Pelosi, the iconic Democratic speaker. But across the Capitol,
Mitch McConnell quietly celebrated a historic accomplishment: becoming the
longest-serving Senate leader in history, surpassing the record of 16 years
held by Mike Mansfield, Democrat of Montana. Mansfield will never match the
fame of his predecessor, Lyndon B. Johnson, Robert A. Caro’s “master of the
Senate.” But McConnell, a keen student of Senate history, called Mansfield the
Senate leader he most admired, “for restoring the Senate to a place of greater
cooperation and freedom.”

Unfortunately,
McConnell has ignored every lesson from Mansfield’s leadership. Mike Mansfield
took the helm of a struggling Senate trying to overcome the reactionary power
of the Southern bloc and led it to its greatest period of accomplishment ever in
the 1960s and 1970s. Mitch McConnell took a struggling Senate trying to
overcome the centrifugal forces of our increasingly divided politics and drove
it into an accelerating downward spiral, culminating in 2020 and early 2021 in
the Senate’s most catastrophic failure, when it failed to convict Donald J.
Trump in his second impeachment trial even after he incited the January 6 insurrection. In every respect, McConnell has been the
anti-Mansfield.

Mansfield, born in 1900, a professor of Asian
history and a World War I veteran who served in all three branches of the
military, was an unlikely politician: laconic, intellectual, and averse to
self-promotion. He didn’t seek to be a Senate leader, accepting the job very
reluctantly at the request of his close friend, President-elect John F.
Kennedy. He failed to inspire confidence initially, to the point that he
offered the Senate his resignation near the end of his third year if it was
unsatisfied with his light-touch approach to leadership. “It is unlikely that
[Mansfield] twisted one arm in his sixteen years in charge,” Tom Daschle and
Trent Lott, Senate leaders between 1996 and 2004, would later write in
admiration and amazement. Yet after the assassination of President Kennedy,
Mansfield built a Senate based on trust and mutual respect, enabling the body to
meet the challenges of a turbulent period in a bipartisan
way.

Universally
admired for his wisdom, honesty, and fairness, Mansfield worked with President
Johnson and the Senate led by Hubert Humphrey and Everett Dirksen to break the Southern
filibuster to pass the historic Civil Rights Act of 1964. Drawing on his
deep knowledge of Asia, Mansfield presciently warned Presidents Kennedy,
Johnson, and Nixon that the U.S. engagement in Vietnam was disastrous. Under
his leadership, the Senate became the forum for challenging, and ultimately
ending, the war.

In October 1972, when Bob Woodward and Carl
Bernstein uncovered the abuses of Richard Nixon’s presidential campaign,
Mansfield immediately promised a full and fair Senate investigation. When the
Senate convened in January 1973, it unanimously voted to create a select
committee to investigate the abuses, by then known as “Watergate,” even though
Nixon had won reelection in a 49-state landslide. The bombshell revelations of
the committee’s memorable hearings in the summer of 1973, led by Democrat Sam
Ervin and Republican Howard Baker, paved the way inexorably to Nixon’s
resignation a year later.

In contrast, McConnell has been far and
away the most partisan Senate leader in the modern era. Passing up virtually
every opportunity to turn down the heat and bring people together in a bitterly
divided nation, McConnell labeled his opponents “thugs” and “the mob”; blasted
“blue state bailouts” during the pandemic; silenced Elizabeth Warren with an
unprecedented misuse of the Senate rules; accused Democrats of “treating
religious Americans like strange animals in a menagerie”; admitted openly that
“the single most important thing” he and Republicans could do was to make
Barack Obama a one-term president; and opposed the nomination of Judge Ketanji
Jackson to the Supreme Court, calling her “the favored choice of left-wing,
dark money groups.”

Early in his Senate career, McConnell set his
sights on being the leader; with great patience and political skill, he achieved
that after 22 years in the Senate. Yet despite his supposed love of the
institution, McConnell has routinely trashed the customs and norms essential
for the Senate to serve as what Walter Mondale called “the nation’s mediator.”
There is no precedent for McConnell’s relentless efforts in 2017 to repeal the
Affordable Care Act without a replacement—and without hearings, committee
markup, consultation with affected interests, or any trace of bipartisanship.
Nor was there any precedent for his refusal to give Judge Merrick Garland,
President Obama’s nominee for the Supreme Court, a confirmation hearing for
nine months before the 2016 election.

In stark contrast to Mansfield, McConnell failed
America in crisis times. He did not use his power to stop Donald Trump’s assault
on our democracy. He was AWOL when Trump’s unhinged leadership during the
pandemic caused hundreds of thousands of Americans to die needlessly. He did
not counter Trump’s claims that the presidential election was stolen for five
long weeks after the Associated Press and networks called the election for Biden,
allowing the “Big Lie” to spread like wildfire and to be embraced by 50 million
Americans. McConnell could not bring himself to vote to convict
Trump in his second impeachment trial, even after the January 6 insurrection,
despite his powerful denunciation of the former president.

Interestingly, McConnell has forged an
impressive record in the past year: steadfastly supporting President Biden’s
strong position on sending arms to Ukraine, breaking with the NRA and the gun
manufacturers to support the first gun safety legislation since 1994, and joining
with Democrats and Republicans to pass the Electoral Count Act and fund the
government through September 30, 2023. Politicians operate at the intersection
of conviction, calculation, and conscience, and perhaps in McConnell’s case,
some degree of regret and guilt. As long as he still holds power, McConnell can
airbrush his record by doing some good for America.

Ultimately, however, McConnell’s page in the
history books is likely to focus less on his failure to stop Trump and more on how
an iron-willed leader orchestrated a corrupted confirmation process for four
years to produce a radical, lawless Supreme Court. When the Republican Senate
finished the job in October 2020 by ramming through the confirmation of Judge
Amy Coney Barrett to fill the vacancy left by the death of Justice Ruth Bader
Ginsburg eight days before Election Day, McConnell congratulated himself on
“the single most important accomplishment of my career.… A lot of what we have
done in the last four years will be undone sooner or later by the next
election. They won’t be able to do much about this for a long time to
come.”

By “they,” McConnell meant future presidents,
Congresses, and American voters—an appalling statement for a political leader
in a democracy. McConnell’s legacy is assured; now 80, he will be recalled
every time his illegitimate, extremist court diminishes the constitutional
rights of Americans or usurps the authority of other branches of government.

Survival Fishing – Most epic survival basket fish trap ever!
DuPage County Sheriff Won’t be Censured Over Opposition to Illinois Assault Weapons Ban
Analysis: Why Biden pushes an assault weapons ban despite the political odds
The Survival Shakedown – Are You Up For The Challenge?
#SongforSocialChange “Why Oh Why” Climbs Fast Up the Charts Sending a Healing Message to the World