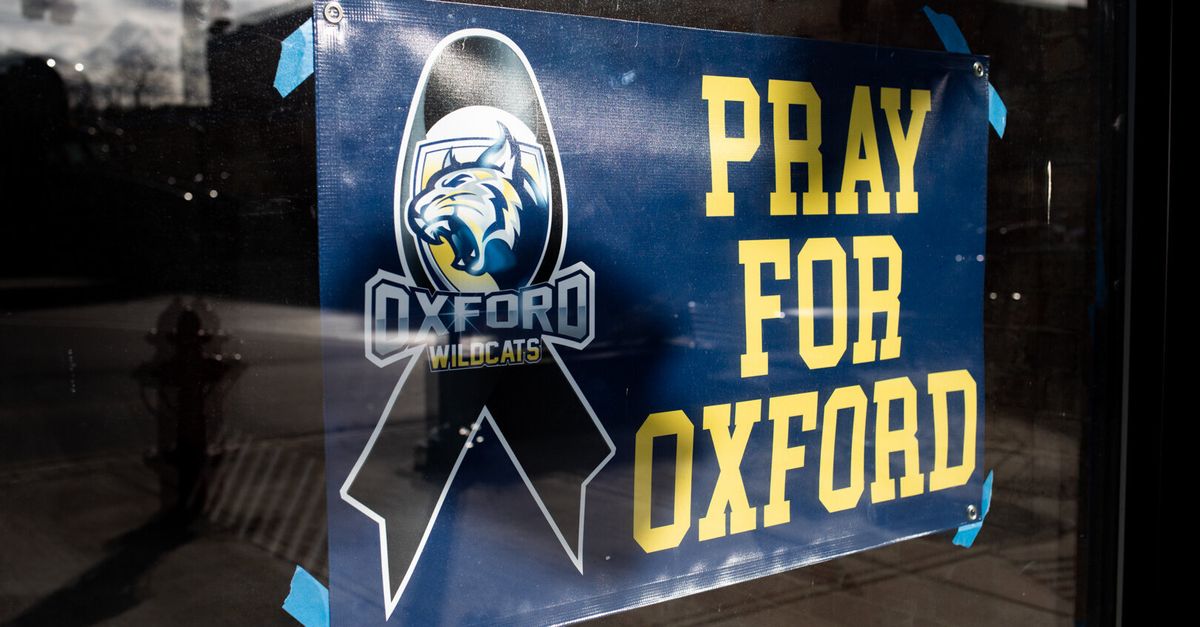 Supporters of gun safety legislation held rallies across the state of Michigan this week, including one in Oxford, a northern Detroit suburb that was the site of a high school massacre in November 2021.

Among the speakers there was Madeline Johnson, a survivor of the shooting who saw her best friend die. She talked about the fear of public speaking she once had ― and how that fear was “ripped away from me, along with my childhood, the second I heard the first round of bullets ringing in my ears.”

“There are much scarier things in this world than giving speeches,” she said, according to an account in The Detroit News. “I no longer have room in my life to be a kid, but I will gladly sacrifice that, and I will gladly talk until you listen, so that no one else has to grow up overnight.”

The frustration from Johnson and other gun legislation advocates was palpable, and a reflection of what’s transpired ever since the Oxford shooting ― when, despite the familiar outpouring of “thoughts and prayers,” the Republicans who controlled the state legislature refused to act.

But that may be about to change, because Republicans don’t control the legislature anymore. Democrats do. In the midterm elections, they won majorities in both Michigan’s House and its Senate, something they haven’t had since the 1980s.

Democratic leaders have made it clear they want to pass a trio of gun laws: universal background checks, new gun storage requirements, and so-called “red flag” laws meant to keep firearms out of the hands of people who pose an immediate threat to others or themselves. Newly reelected Democratic Gov. Gretchen Whitmer has said these are high priorities for her too.

These reforms are part of a broader agenda that Whitmer and the newly empowered Democrats hope to pass, now that they can finally act. It includes everything from a boost in tax credits for working families to codifying protections for reproductive rights.

And it’s not just Michigan where this kind of activity is likely to take place. You’ll hear similar plans from Democratic officials in other states where they have the power to pass laws ― especially the three others (Maryland, Massachusetts and Minnesota) where, as in Michigan, Democrats are getting that power for the first time in years.

Of course, passing laws is never as easy as promising them. The exercise of moving from slogans to specifics ― of translating abstract concepts into statutory details ― is inevitably difficult, especially on issues where the opposition is well-financed and well-organized.

But in today’s political environment, Democrats have a big advantage: On many of the key issues they are tackling at the state level, they appear more in step with mainstream popular opinion than the Republicans.

Gun safety is one of those issues.

The Politics Of Gun Laws Have Changed

That may sound hard to believe, at least in Michigan, where about 4 in 10 adults have at least one gun. But it turns out the three reforms Democrats are pushing are wildly popular, according to polls ― including a September survey from EPIC-MRA in which all three got at least plurality support, and two got majority support, even among members of the National Rifle Association.

It’s not as easy to prove that these measures will have an impact on gun violence, because ironclad scientific research on them is hard to find. But there’s plenty of suggestive evidence that these measures can reduce mass shootings, at least at the margins, and maybe have an even bigger effect on suicides.

The possibility of reducing suicides is one reason gun safety laws have been a longtime priority for Rosemary Bayer, a veteran Democratic state senator from Michigan. Bayer told me she’s had two people in her life die by suicide ― a classmate in high school and, later, a member of her family. “You never forget this, ever ever, if it’s happened to somebody close to you,” she said. “You think, what could I do, what should I have done.”

But Bayer is also reacting to killings of others ― whether in everyday life or in mass shootings like the one in Oxford, which took place in her district.

I happened to speak with her a few weeks after that. She was shaken by the tragedy, like everybody in the area, but hopeful that the combination of sympathy and anger might finally lead to action ― especially since Mike Shirkey, leader of the state Senate Republicans, had promised to hold a hearing on the issue. But he never did.

Shirkey could wield that kind of power because Republicans had a lock on the state legislature, thanks to gerrymandering that protected their majority even if they were out of step with public opinion. This past year was the first election with districts drawn instead by a nonpartisan commission. Not coincidentally, it’s the first time in decades Democrats won back control.

Democratic state Sen. Mallory McMorrow, who is the majority whip and a longtime supporter of these proposals, said she too thinks the politics of guns are changing.

“The fact that this is hitting our own backyard significantly ― from the Oxford high school shooting to just a number of everyday gun violence incidents that happened here in Michigan ― I think that public opinion on this issue has shifted and shifted significantly,” McMorrow told me.

McMorrow noted that the measures she and other Democrats are proposing have support from some Republican officials at the local level, which will make it harder for opponents to paint their efforts as purely partisan. “We’ve had some local Republican partners in the past, we just haven’t been able to get this across the line,” she said.

In the past, GOP leaders blocked bills from going through committee or coming to the floor in part to spare members from having to vote on them. Now lawmakers will have to declare their positions ― and Bayer thinks at least some Republicans are going to think twice before voting no on these widely popular measures.

“This is the first time they’re actually going to have to speak for themselves,” Bayer said. And if these Republicans don’t support the proposals, they’ll risk a backlash from the majority of Michigan voters ― not to mention activists like Maddie Johnson, whose voices and personal stories have already made such an impression.

If you or someone you know needs help, dial 988 or call 1-800-273-8255 for the National Suicide Prevention Lifeline. You can also get support via text by visiting suicidepreventionlifeline.org/chat. Outside of the U.S., please visit the International Association for Suicide Prevention for a database of resources.