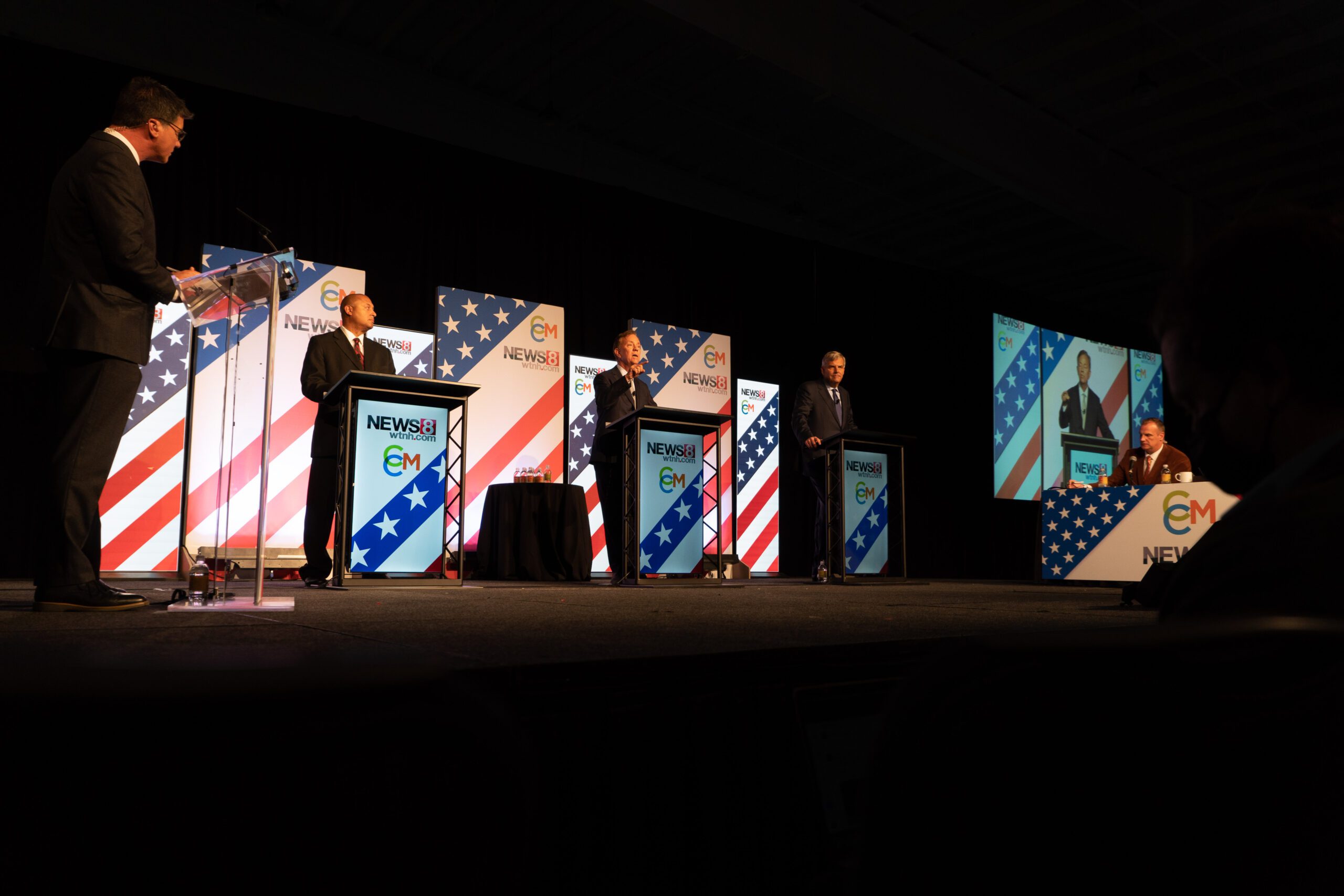 UNCASVILLE – The main sparring in the final debate for Governor on Tuesday night was over the economy, but candidates also tried to differentiate themselves on crime, abortion and the balance of building more affordable housing and maintaining local control of zoning.

Inflation and the economy look to be the driving issues of the campaign — an October poll by CT Examiner/Fabrizio, Lee & Associates found they were the top two issues that likely voters identified as most important to them in deciding between Gov. Ned Lamont, Republican challenger Bob Stefanowski and Independent Party candidate Rob Hotaling.

But in the wake of the U.S. Supreme Court overturning the right to abortion established by Roe v. Wade this summer, 11 percent of respondents said abortion was the most important issue to them – the third most common response from likely voters.

Throughout the campaign, Lamont has sought to make abortion a dividing line between himself and Stefanowski, while Stefanowski has tried to distance himself from the national Republican Party and brand himself “pro-choice.”

On Tuesday – at the Connecticut Conference of Municipalities/WTNH News 8 debate at Mohegan Sun – News 8 Chief Political Correspondent Jodi Latina tried to clarify their positions, asking each candidate if they supported outlawing abortion “at any point in a woman’s pregnancy,” or support any changes to Connecticut’s law that allows abortion up until 22 weeks – considered the viablility of the fetus.

Each of the three candidates said that they support a right to abortion up to 22 weeks and would not change Connecticut’s law, but Lamont and Hotaling tried to cast doubt on Stefanowski’s commitment to that position.

“First [Stefanowski said abortion] is a distraction. Then he said, maybe 12 weeks, then they’re not gonna let them. Then he said, ‘Oh, I misspoke,’” Lamont said. “Sometimes when people misspeak, you really realize what they’re thinking.”

Hotaling said that the problem with the Supreme Court overturning Roe v. Wade is that the protection for abortion is now simply a state law, which can be changed or removed down the line. That makes it more important for people who want to preserve that law to make sure they have a governor committed to that, he said.

“So Mr. Stefanowski might say [that he supports the state law] now, but who’s to say two years from now, with a different legislature, it might not change?” Hotaling said.

Stefanowski bristled and repeated that he supports “a woman’s right to choose,” and that those rights would not going to change as long as he was governor. He said “the people of Connecticut know where I stand on this,” and said Lamont is using abortion to distract from inflation, crime, and people struggling to pay their bills.

“We’ve got a better plan,” Stefanowski said. “That’s why the Governor wants to keep bringing it up and lying about my position.”

News 8 Morning Anchor Keith Kountz asked the candidates if they would support stricter gun laws, or what other steps they would take to make people feel safer from gun violence. Stefanowski took the opportunity to brand Lamont as against the police, saying nothing about guns.

“I have not met one person on the entire campaign who thinks they’re safer than they were four years ago,” Stefanowski said. “We can throw out stats – rape up 23 percent, the most violent year in Hartford we’ve seen since 2003 – and it’s time to change our approach to law enforcement. This Governor has decimated law enforcement across the state.”

In the CT Examiner/Fabrizio, Lee & Associates poll, five percent of likely voters surveyed said gun laws were the most important issue to them, and another four percent said crime would drive their vote – making them two of the six most common responses.

Lamont criticized Stefanowski for side-stepping the question on gun laws, and said “you’re not serious about crime unless you’re serious about guns.” He said Connecticut needs to continue to focus on getting illegal guns and “assault weapons” off the street.

“[Stefanowski] has an A+ NRA rating, he won’t touch guns,” Lamont said.

Lamont said Stefanowski would “leave AR-15s and assault-style weapons all over our streets,” leaving police and communities in danger. Stefanowski said he would look to enforce Connecticut’s current gun laws “to the letter of the law,” before talking about changing them.

Hotaling took issue with a mailer contrasting him and Stefanowski that branded him as a supporter of “the liberal, defund the police agenda,” Hotaling said. And he said it was “not acceptable” for Stefanowski to attempt to politicize the killing of two Bristol police officers, Lt. Dustin DeMonte and Sgt. Alex Hamzy, in October.

“I strongly support funding for police, firefighters, and all public safety personnel,” Hotaling said. “I’m the only one up here who’s actually innovating within the school safety and public safety space with my gunshot detection system, other public safety technologies, and work with police in New Haven and elsewhere.”

Stefanowski said he was the only of the three candidates who would support police. He said the police accountability law passed in 2020 after Minneapolis police killed George Floyd “created a sense of leniency and corruption,” and suggested it contributed to the killings of DeMonte and Hamzy.

“You’re telling me, after four officers getting shot in the same week, you’re standing by a bill that was passed at 7:30 in the morning, that said it was going to be revised by the legislature,” Stefanowski said. “It’s unconscionable.”

Lamont said the killing of the two officers was “a madman who was drunk with an AR-15-style assault weapon,” and that the real way to protect police is to get those weapons off the street. He defended the bill, saying police welcomed the requirement that they wear body cameras.

Hotaling said he has been stopped, threatened and shouted at by police, and while he supports police, he believes the bill addresses concerns of communities that have been disproportionately targeted by police – including a requirement for police to intervene if other officers are using excessive force.

“You had three officer, four officers just standing there as George Floyd had a knee on his neck,” Hotaling said. “Is that the type of society you want to live in?”

Affordable housing and local control were less commonly cited as key issues for voters in the CT Examiner/Fabrizio, Lee & Associates poll – with 3 percent and 1 percent of likely voters identifying them as the most important issue to them, respectively.

But the fight over Connecticut’s landmark 1989 affordable housing law, known as 8-30g, and the balance between building more affordable housing in suburban towns, and protecting those towns’ rights to govern their own land use decisions, has been a driving issue in Hartford and in state legislative races for years.

Lamont said he believes strongly in local control, but said Connecticut desperately needs more housing for workers, seniors and police and firefighters to live in. If towns can come up with their own plans for where they want more affordable housing, “there is no 8-30g,” Lamont said.

“It’s only for those town’s that refuse to come up with a plan, there you have to give a little more push,” he said.

Stefanowski said he is a “product of affordable housing,” but said the affordable housing law “put in place before the fall of the Berlin wall,” isn’t working – evidenced by the fewer than 40 municipalities that have enough “affordable” housing to be exempt from 8-30g, which lets developers bypass local zoning to build housing developments with some designated “affordable” units.

“Having this stick approach isn’t going to work when I’m governor. I’m going to work with you,” Stefanowski said. “Right now, if you don’t comply, Gov. Lamont pulls away your transportation funds. We need to work together, not every town is the same.”

And the requirement that towns have 10 percent of their housing stock considered affordable needs to consider “natural” affordable housing like duplexes and townhouses, he said.