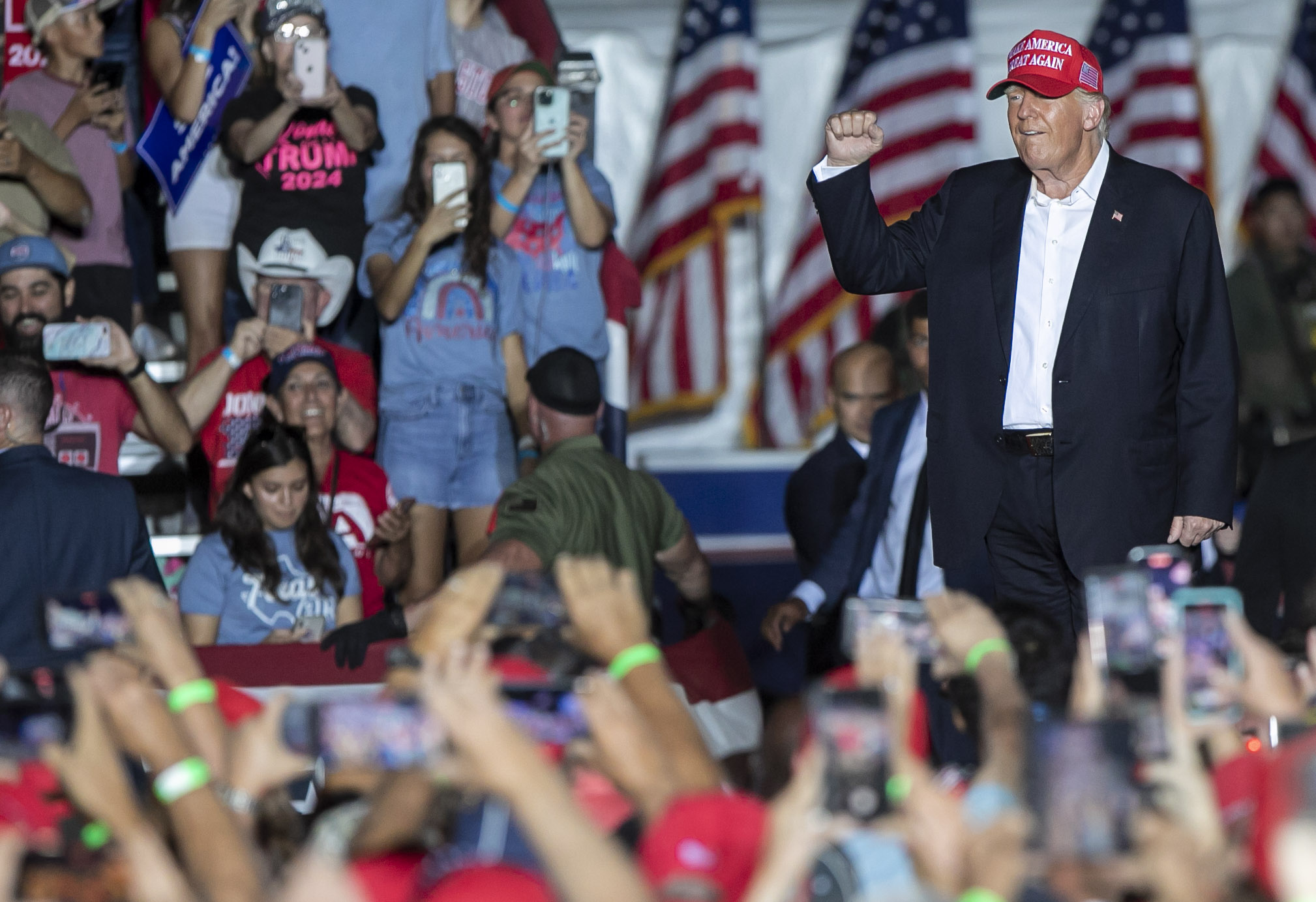 Former President Donald Trump visited Texas Saturday for a “Save America” rally before the November midterm elections. Here’s how the evening unfolded.

Trump asks Lt. Gov. Dan Patrick to come back onto the stage, and Patrick gives an especially animated performance, shouting angrily at one point that “Joe Biden has made the life of every Texan worse.”

“And we do not want Joe Biden’s America in Texas,” Patrick said, before turning to Trump. “Mr. President, this is your home. We love you.”

Trump suggested he would “probably” run for president again in 2024, but indicated he wouldn’t make any formal announcements until after the midterms.

“In order to make our country successful, safe and glorious again, I will probably have to do it again,” Trump said to applause and chants of “U.S.A.”
“But first we have to win a historic victory for the Republican Party this November,” Trump said.

Although Gov. Greg Abbott wasn’t in Robstown for Trump’s rally, the former president was more than willing to take a jab at Democrat Beto O’Rourke, calling the Democrat a “flake.”

“Seventeen days from now the people of Texas are going to defeat Beto O’Rourke,” Trump said. “And we’re going to keep Greg Abbott, a wonderful man, a great man, a great governor.”

Trump has a long history of taking jabs at O’Rourke. In 2018, he held a rally in Houston to help U.S. Sen. Ted Cruz against O’Rourke. At that stop Trump called O’Rourke a “stone-cold phony.”

Abbott said earlier this week that he would not be able to be in area for the rally because he had a pre-planned fundraising event in Florida that conflicted with Trump’s schedule.

Trump on Saturday called President Joe Biden and Democrats lunatics for not supporting oil and gas jobs more in Texas.

“They’re against oil, God and guns, and then they say they’re going to do well in Texas,” Trump said. “I don’t think so.”

O’Rourke’s campaign was more than willing to let Trump campaign for Abbott in Texas, releasing a fundraising appeal to their supporters to try to counter the impact of Trump. “Like Trump, Greg Abbott’s platform is rooted in fearmongering and scoring cheap political points by hurting Texans.”

Trump says Mexico is the “No. 1 most unsafe” country in the world, more unsafe than even Afghanistan.

It’s unclear where he’s getting that statistic. According to the Global World Peace index, Mexico isn’t even in the top 20 most dangerous countries: Afghanistan topped that list. Mexico was 27th out of 163 countries reviewed.

Trump said he wished Paxton had worked with him in the White House, saying Paxton would have “figured out that voter fraud in about two minutes.”“I wish I had him as attorney general,” Trump said.

Paxton’s staff spent 20,000 hours looking for voter fraud last year, focusing on the 2020 elections, and didn’t uncover anything beyond isolated incidents affecting a handful of votes in an election in which more than 11 million Texans cast ballots.

Trump: ‘The Texas way of life is under siege”

Trump took the stage shortly before 7:30 p.m., tossing red baseball hats out into the crowd as American flags whipped in the wind behind him. Lee Greenwood’s “God Bless the USA” blared from the soundsystem.

‘What’s happened to our country is a disgrace, but I’m glad to be back… in the great state of Texas,” Trump said.

Moments later, Trump warned: “The Texas way of life is under siege”

Lt. Gov. Dan Patrick got a good roar from the crowd by saying Texas is what the rest of America used to be. “We love God. We love our families. We love our guns. We love girls being on the sports teams, not boys. We love the fossil fuel industry which is the heartbeat of America and Texas.”

‘Whoever votes for Beto’ won’t vote for me

ROBSTOWN — Lt. Gov. Dan Patrick, speaking ahead of Trump, urged the crowd in Robstown to support GOP candidates up and down the ballot, singling out a handful of local Republicans from the Corpus Christi area.

Among the Patrick-promoted candidates was Adam Hinojosa, the GOP nominee in an open race for the state Senate seat held by retiring Democrat Eddie Lucio, Jr.

As lieutenant governor, Patrick presides over the 31-member Senate, where he is hoping to expand Republicans’ current 18-13 advantage.

Patrick also predicted there would be few midterm voters who split their tickets by voting for a mix of Democratic and Republican statewide candidates.

For decades, Texas voters could check a single box to automatically vote for every candidate on the ballot from their preferred party, a practice known as straight-ticket voting. Lawmakers removed the option starting with the 2020 election, giving down-ballot candidates more control over their fate than before.

Sending Trump to a swing district?

Political experts this week pointed out that Nueces County, where Trump is appearing, is an odd choice and why many Republicans in close races may not want to be anywhere near him at tonight’s rally.

Nueces County is as purple as you get in Texas politics of late. In 2016 the county narrowly went for Trump, but in 2018 Democrat Beto O’Rourke won there. Then in 2020 it swung back to Trump, narrowly.

And talk about competition for the crowd’s attention. When Trump takes the stage at 7 p.m., the Astros-Yankees game could be in 8th or 9th inning, the San Antonio Spurs will be late in their game and the Texas A&M football game will have just kicked off.

It’s no coincidence that Trump chose Nueces County to speak tonight. The city of Corpus Christi is one of the last urban strongholds for Republicans in the state, and it’s been inching toward the Democrats in recent elections. If the GOP wants to do well on Nov. 8, they’ll need a strong showing there.

”What that says is, Nueces County’s voice is important,” Baker said. “And that’s what we keep pushing and telling people.”

As former President Donald Trump prepares to speak tonight near Corpus Christi, he still hasn’t paid back the city of El Paso the more than $500,000 he owes for hosting his 2019 rally there, a city spokeswoman confirmed.

The billionaire former president, whose political war chest boasts well over $100,000,000, owes the city $569,204 for transportation, security and a 21-percent late fee. In 2020, the city hired a law firm to try to collect, the city spokeswoman said, but so far $0 has been collected.

No F-bombs on T-shirts allowed

A security guard was shown on a livestream asking Trump supporters waiting to get in not to wear shirts with profanity on them.“I understand they sell them here,” he said.

“But if they have anything that you would not wear to your grandmother’s house, please refrain from wearing them inside, because we are better than that and we are going to look better than that.”

‘The belly of the beast’

By 4 p.m., when a slate of Republican candidates and officials began speaking, the venue was filled with Trump voters donning the former president’s trademark red campaign hats and T-shirts with messages such as “Jesus is my savior, Trump is my president.”

*NSYNC and AC/DC blared as the crowd filed into bleacher-style seats surrounding the podium where Trump will speak later this evening.

Bianca Gracia, a Robstown native and president of the Latinos for Trump group, said Trump’s rally here is, by far, the biggest Republican campaign event she had seen in her hometown — an area historically dominated by Democrats.

“We’ve never had anything like this here, ever,” Gracia said. “It’s amazing to see all the Latinos and Hispanics, Tejanos, out here. This is what it’s about. When you go and do outreach and engagement — and that’s what President Trump understands — you’ve go to the belly of the beast and you talk to people about hope and faith.”

BACKGROUND: Trump is sure to fire up GOP diehards during Texas visit, but at what cost?

Trump’s Nueces County visit marks his eighth trip to Texas since he left office in January 2021. He last visited the state in May for the NRA’s annual meeting in Houston.

Saturday’s rally is about a 20-mile drive from the edge of two South Texas congressional districts being targeted by Republicans, who are bullish on their chances of competing in historically Democratic South Texas.

They are most optimistic about Texas’ 15th Congressional District, where Republican nominee Monica De La Cruz had more than doubled the fundraising total of her Democratic opponent, Michelle Vallejo, through the end of September.

Anchored in Hidalgo County, the district stretches from McAllen all the way north to Guadalupe and Wilson counties, cutting through a long sliver of mostly rural Texas. The GOP-controlled Legislature redrew the district last year to favor Republicans.

Texas Democrats have complained recently that the national party appeared to be pulling resources from the district as most national Democratic campaign groups have prioritized the re-election bids of incumbents in South Texas, U.S. Reps. Henry Cuellar of Laredo and Vicente Gonzalez of McAllen.

Gonzalez, a Democrat who switched districts after narrowly defeating De La Cruz in 2020, is looking to unseat Republican U.S. Rep. Mayra Flores in Texas’ 34th Congressional District, which she flipped in a special election earlier this year.

Flores and De La Cruz were not scheduled to speak at the rally, though they both delivered brief pre-recorded remarks that were broadcast on a large video screen.

18 Trump visits to Texas as president

Trump is holding the rally in Robstown, just outside of Corpus Christi, his first trip back to Texas since speaking that the NRA’s annual meeting in Houston in May. Trump last held a Texas rally in Montgomery County in January.

During his tenure in the White House, Texas was one of Trump’s most frequent destinations. He made 18 visits to Texas over 4 years — one of the 9 most visited states during his presidency.

He has most frequently visited Houston and Dallas, which have seen him 8 times each since the start of 2017.

His first trip to Texas as president was after Hurricane Harvey in 2017 when he first traveled to Corpus Christi to assess damage in nearby Rockport and surrounding communities.