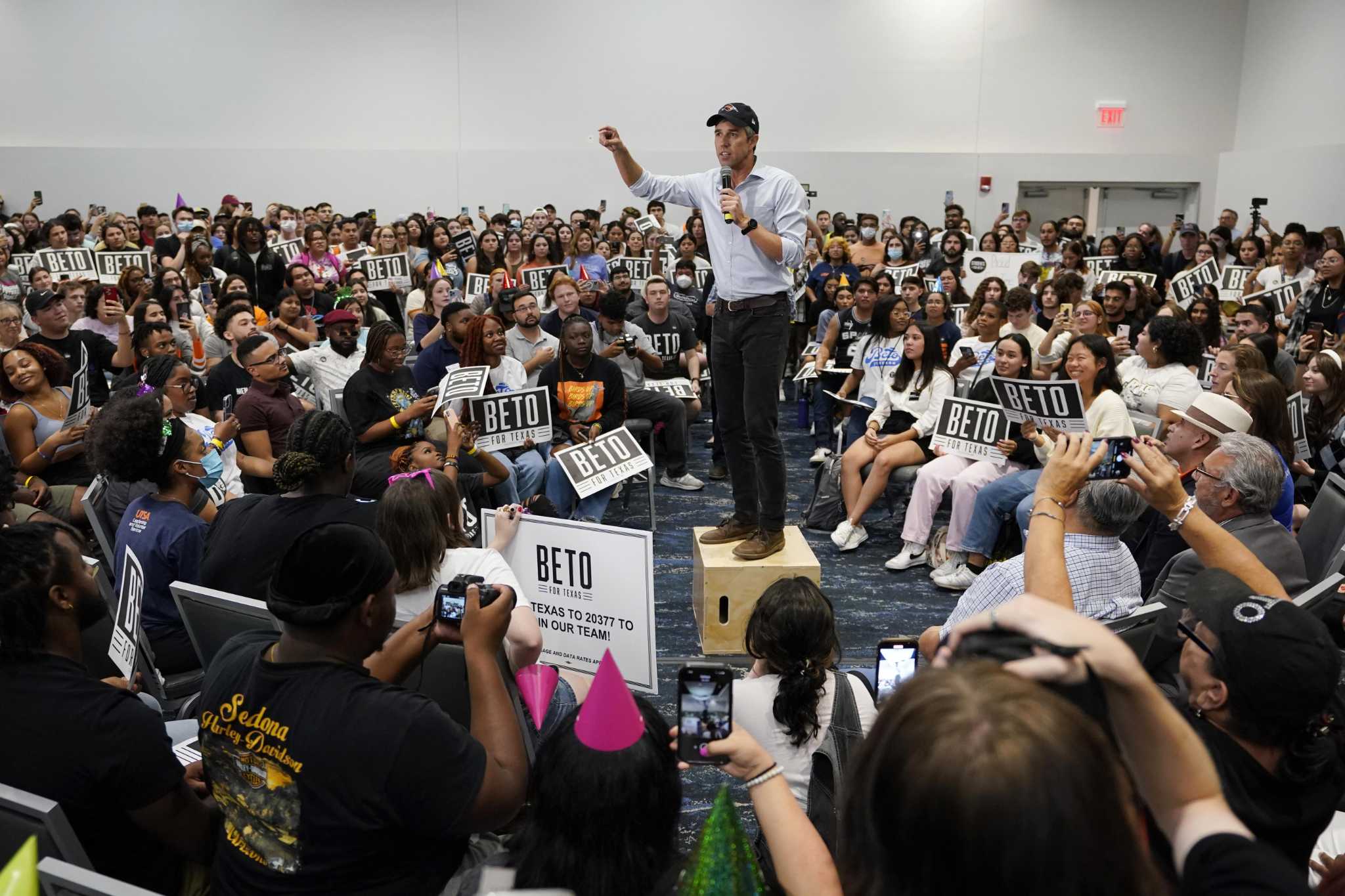 “Beto! Beto! Beto!” chant the students in the auditorium at Texas State University in San Marcos.

“We care about this state, don’t we? I want each and every one of you to take this energy to the ballot box!” a student on stage said to wild applause. “Vote like hell, y’all.”

Wiley College,
Dallas College
and other campuses, students cheer, listen, and wait in line for photos, hugs and autographs.

O’Rourke has said his
college tour
is his effort to “make sure we do everything we can at this defining moment of truth to come through.”

At each stop, O’Rourke speaks of prioritizing the lives of children ahead of the interests of the National Rifle Association, ensuring women’s right to health care and abortion access, supporting public school teachers and veterans, and legalizing marijuana.

And he tells students they could be part of something extraordinary — electing the first Democratic governor in 30 years.

Myriad groups are trying to compel young people to vote. This year, NextGen America, a leading national organization for engaging young people through voter education, registration and mobilization aims to contact more than 9.6 million young voters ahead of the midterms.

“In recent months, young people have faced an onslaught of attacks on their basic rights. The only way to keep fighting against the attacks we’re facing as a generation is to keep showing up for every election cycle,” NextGen America President Cristina Tzintzún Ramirez said in a
recent news release.

Though there was
an 11 percent increase, to about half, in the number of young people 18 to 29 who voted in the 2020 presidential election, young people typically don’t cast ballots.

Mark Jones, a political science professor at Rice University, said O’Rourke stands out in his outreach to young voters.

“I don’t think any candidate out there on the Democratic or Republican side is making anywhere close to the effort that Beto is in terms of retail campaigning, essentially, barnstorming the state, meeting with anyone and everyone he can. No one is engaged in that type of activity,” Jones said.

At
Texas State, O’Rourke
offered a civic lesson
when he said: “This is supposed to be the world’s greatest democracy. This state is the hardest in the union in which to cast a ballot or to get your name on the rolls to be registered to vote in the first place…. Seven million of our fellow Texans did not vote in the 2020 election — the most important presidential contest in our lifetime.”

He spoke of polling place closures, especially in Black and brown neighborhoods.

So far, polls are not in O’Rourke’s favor. In a mid-September survey from
the Dallas Morning News and the University of Texas at Tyler, O’Rourke was 9 percentage points behind Abbott. A
University of Texas/Texas Project poll
put the margin at 5 points.

According to
the poll: “O’Rourke holds a two to one advantage over Gov. Greg Abbott (56 percent to 28 percent) among younger Hispanics belonging to Generation Z and the Millennial generational cohort, who, combined are expected to account for at least two-fifths of Texas Hispanic voters this fall.”

“If O’Rourke can mobilize Gen Z to register and vote in proportion to its share of the Texas population, then he could be the next governor of the state of Texas,” he said.

O’Rourke is betting on young people to make it happen.