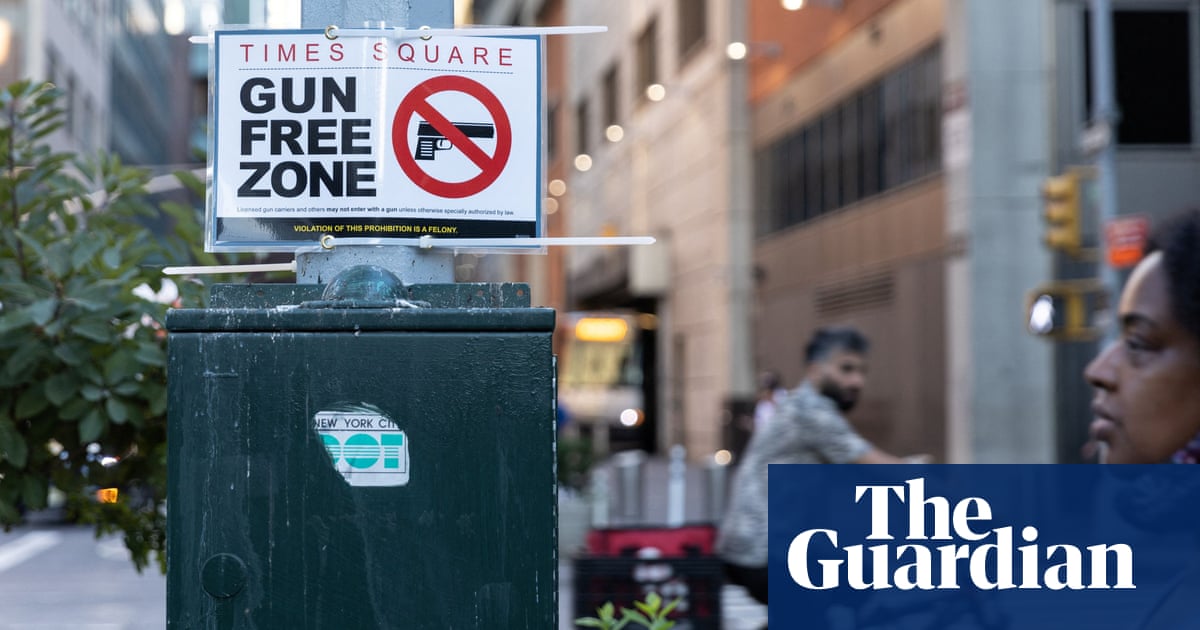 A federal judge on Thursday temporarily blocked parts of New York state’s new gun law, in order to allow the Gun Owners of America (GOA), an advocacy group, an opportunity to pursue a lawsuit challenging the legislation.

The law came into effect on 1 September, creating new requirements for obtaining a license, including submitting social media accounts for review, and creating a list of public and private places where having a gun is a felony crime, even for license holders.

Lawmakers in the Democratic-controlled state legislature passed the law in an emergency session in July, after the US supreme court found the state’s licensing regime for firearms to be unconstitutional following a challenge by the New York affiliate of the National Rifle Association (NRA), a powerful gun-owners group.

On Thursday, Glenn Suddaby, chief judge of the US district court in Syracuse, agreed to issue the order at the request of six New York-resident members of GOA, which competes with the NRA. Suddaby said his order would not take effect for three days, to allow New York state to appeal.

Last month, in a ruling that said much of the new law was unconstitutional, Suddaby nonetheless said he found neither the GOA nor an individual member had standing to sue before the law came into effect.

Elsewhere on Thursday, the federal government expressed support for a New York City lawsuit seeking to halt the spread of “ghost guns”, as city and state officials try to hold sellers of the largely untraceable firearms accountable.

In a “statement of interest” filed in Manhattan federal court, the US Department of Justice expressed “serious concerns” about the proliferation of ghost guns, and said kits containing components are classified as firearms under federal gun control law.

“Ghost guns are a major contributor to the ongoing plague of gun violence,” Breon Peace, US attorney in Brooklyn, said in a statement accompanying the filing, which the US attorney in Manhattan, Damian Williams, also signed.

“The United States will continue to employ every means available, including civil tools, to keep ghost guns and other illegal firearms out of the hands of criminals and reduce the risk of gun violence. The United States filed a statement of interest in this important litigation to ensure that the court is informed of the federal government’s views of pertinent firearms statutes and regulations.”

Ghost guns do not have serial numbers and can be acquired without background checks, potentially letting people otherwise ineligible to buy firearms to construct finished guns.

“We are not going to let gun companies turn New York into a city of mail-order murder,” the said New York mayor, Eric Adams, when announcing the lawsuit.

Both lawsuits were filed six days after the supreme court struck down the century-old New York law that strictly limited the carrying of guns outside the home.

Federal law largely shields gun makers from lawsuits over shootings. There is an exception for when sellers knowingly violate statutes governing sales and marketing.

Three of the five defendants in the city lawsuit have settled, agreeing to stop sales to New York residents.