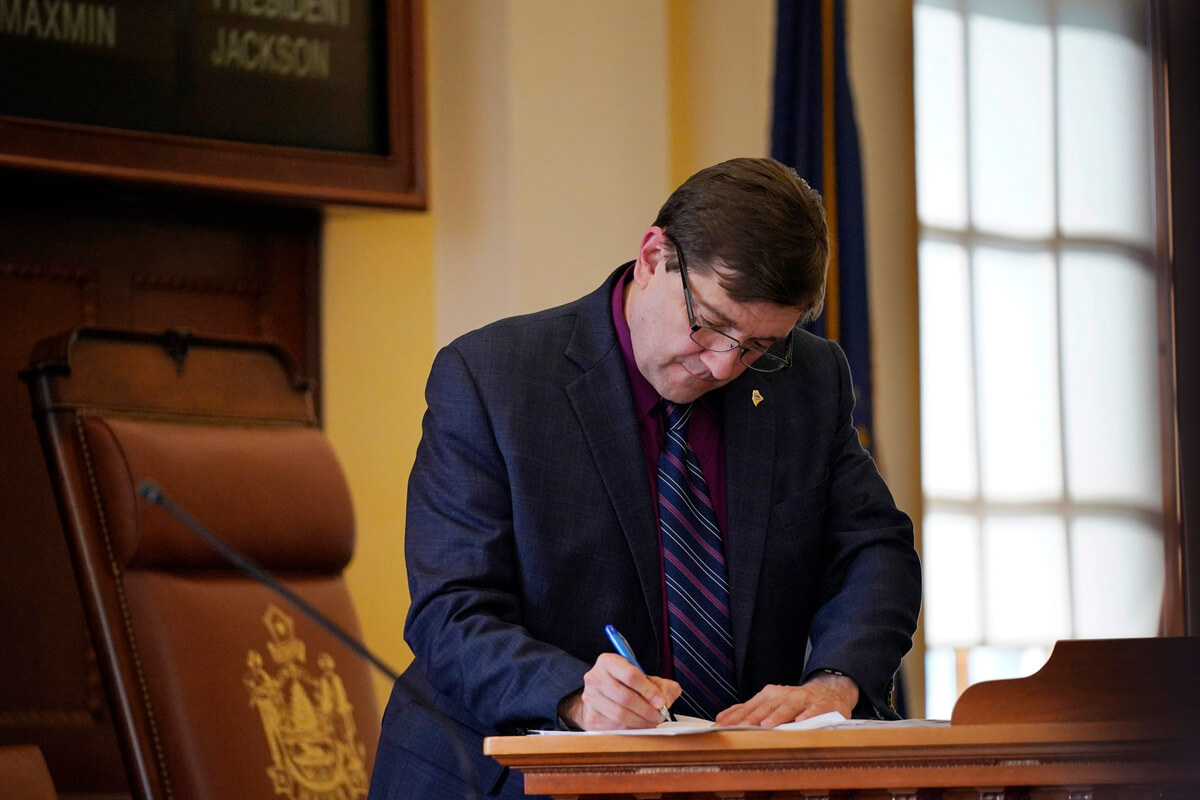 A version of this article was originally published in The Daily Brief, our Maine politics newsletter. Sign up here for daily news and insight from politics editor Michael Shepherd.

About two weeks after Labor Day marked the beginning of peak campaign season, the well-funded Democratic legislative effort is beginning to show their hand on priority seats. One is standing far apart from the others.

That is the seat held by Senate President Troy Jackson, D-Allagash, who faces a tough 2022 challenge from Rep. Sue Bernard, R-Caribou. The top Democrat easily won his last two races against underwhelming Republican challengers, although he faced some of the closest margins in the Senate during his initial stint in the chamber in 2012 and when he returned in 2016.

This sprawling district, which now stretches from Jackson’s hometown on the western extreme of the St. John Valley through Fort Kent, Madawaska, Caribou and Fort Fairfield, puts it in a unique place on the statewide map that makes it a top target for Republicans who made gains in the area during redistricting while trending upward in the region.

Sen. Susan Collins, a Republican, is from here, but Democrats including Jackson and former House Speaker John Martin of Eagle Lake have generally risen to the top of state politics there. While the district still leans Democratic by party registration, it does not always vote that way, a trend that has been observed in other parts of the state with a strong Franco-American heritage. Former President Donald Trump won the district by 10 percentage points in 2020 and former Gov. Paul LePage also did well there.

That explains why Democrats have already sunk $202,000 into the district, a mammoth sum this early with $122,000 of it coming in for TV and radio ads this week. That was nearly as much as Democrats have allocated to their next four priority races behind a fundraising windfall fueled in part by the campaign of Sara Gideon, the former House speaker who lost to Collins in 2020.

Jackson has a unique profile, running the gamut from National Rifle Association endorsements to outflanking Gov. Janet Mills with unabashedly progressive economic policies. He is a central figure in Maine’s labor movement who faced Republican criticism for an official letter in 2019 saying lawmakers could reconsider a Bath Iron Works tax break as he worked for the parent of the shipbuilders union there.

The Democratic spending seems to acknowledge Bernard as a bigger threat than Jackson’s recent challengers. The former Presque Isle news anchor later became the spokesperson for Maine’s Catholic diocese and is a well-known figure on the opposite end of Jackson’s district. She won her seat in 2020 after becoming the only challenger to oust an incumbent in a primary that year.

Fundraising deficits are normal for legislative Republicans, but the early wave of Democratic spending on the Senate has almost gone unanswered with $408,000 spent on the top five priority races to just $30,000 for Republicans. While Democrats are showing worry about Jackson, they are also showing muscle. Republicans have a lot to overcome to make gains.

5 Tactics To Avoid And Resist Abduction #Ultiamtesurvivaltips
15 Survival Items to Buy Regularly: Prepper School Vol. 40
‘I couldn’t stay quiet’: Ryan Busse’s one-man crusade against guns, NRA ‘radicalization’
Home Depot Bug Out Bag! It Surprised Me!
Governor’s debate fractured, with 2 candidates on one side of an issue, another opposed