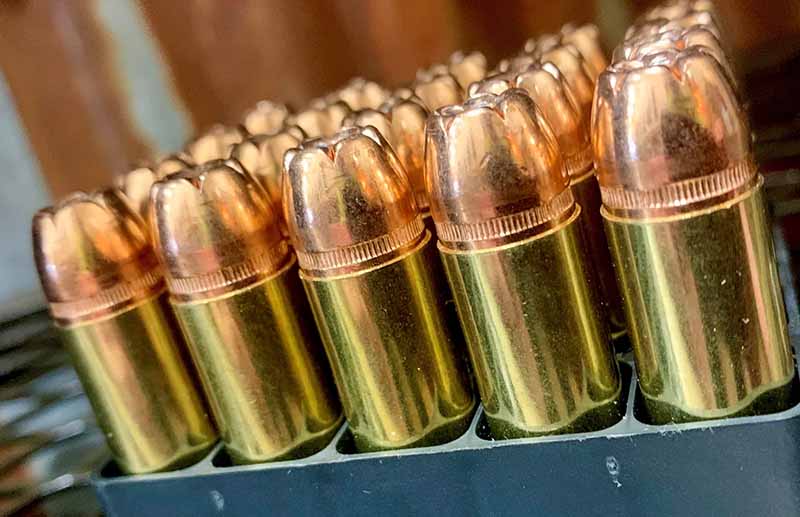 There are a number of big-bore cartridges available for the AR-15 platform, but perhaps the most mysterious is .50 Beowulf.

Notoriously tight-lipped about it, the .50 Beowulf is a brainchild of Alexander Arms. However, there is a certain lineage that would inform its development and usage, which can help you understand its purpose and best-use applications.

Is it a good cartridge for you? Should you get an AR-15 (or maybe an upper) in .50 Beowulf? What are some good factory rifles in .50 Beowulf? Let’s dig in a little bit more and see if you want to add one to your safe.

.50 Beowulf has a similar origin story to .450 Bushmaster and .458 SOCOM, relying on a proven caliber recipe used for more than a century and a half. Basically, a large-bore cartridge with a heavy projectile loaded to medium velocity. Cartridges meeting a similar description have been common fare since the late 19th Century.

The concept of a larger, heavier intermediate cartridge in a semi-auto carbine isn’t even that new either. Winchester created the .401 Self-Loading for the Model 1910 rifle, which sent a .40-caliber bullet of 200 to 250 grains downrange at just under 2000 fps.

The designer of the cartridge and the rifles, Bill Alexander, was an armorer (or rather the armourer) and designer in the UK, who emigrated to the United States to have a bit more freedom to design what he wanted.

Alexander had previously designed 6.5mm Grendel to address the medium-range deficiencies of 5.56mm NATO. He created .50 Beowulf to address its deficiencies at a closer range. Specifically, barrier defeat, vehicle defeat and “stopping power” at close quarters. His idea was to allow the operator to change calibers by merely switching the upper, as 5.56mm magazines feed both cartridge types.

Not to take anything away from .50 Beowulf, but it wasn’t the first…but it certainly is the biggest!

The first attempt to put a big-bore cartridge in the AR-15 was the .45 Professional. A wildcat cartridge developed by Tim LeGendre in the 1990s, the cartridge aimed to satisfy the “Thumper” concept proposed by Jeff Cooper. Cooper envisioned (more or less) an M1 Carbine in .44 Magnum, firing a heavy bullet at modest velocity with an effective range of about 200 yards.

The .45 Professional is/was a prototype of .450 Bushmaster, made for the AR-15 platform and likewise only requiring the user to switch to a .45 Professional upper. However, the proprietary parts required proved problematic to source. That lead to LeGendre redesigning the cartridge in conjunction with Bushmaster and Hornady to create .450 Bushmaster.

Similarly, .458 SOCOM came about to address the limitations of 5.56mm NATO in close quarters based on the US Army’s experience in Somalia during Operation Gothic Serpent. The much-ballyhooed green tip was lackluster at barrier defeat and vehicle defeat, as well as lacking sufficient impact at close quarters. The SOCOM cartridge and the upper were designed in the late ‘90s and began testing in early 2001.

So, .50 Beowulf relies on a time-honored cartridge design (big, heavy bullet at modest speed) and puts it in an AR-platform rifle.

Both .50 Beowulf and .458 SOCOM are based on .50 Action Express brass, with a rebated rim. While SOCOM uses a different rim specification, the rim of .50 Beowulf is turned down to nearly the same diameter as 6.5mm Grendel. This allows the use of a 6.5mm bolt head, just with a .50 Beowulf extractor.

The .50 Beowulf cartridge is proprietary, and Alexander Arms is the sole manufacturer of official .50 Beowulf ammunition.

The ammunition industry, however, reverse engineered it, and you can get 12.7x42mm ammunition—the same cartridge just with a metric naming scheme to get around any patent issues—from multiple manufacturers.

Alexander Arms sells proprietary .50 Beowulf magazines, but they are nearly identical to STANAG 5.56 models. While some users report being able to use standard, unmodified mags in their guns, Alexander Arms’ website and online forums both discuss the modifications required for STANAG mags to reliably feed .50 Beo.

Due to the girth of the cartridge, however, they function as single-stack mags instead, reducing the capacity of 30-rounders down to 10.

The cost of all the lead moving out of an AR-15 is a drop over distance. The Beowulf sinks like a stone. The two loads shown in this Shooter’s Calculator graph drop anywhere from 15 to 20 inches at 200 yards, and well over 50 inches at 300 yards.

Feats of long-range accuracy with the buffalo rifles of yore certainly weren’t impossible (Billy Dixon at the Second Battle of Adobe Walls comes to mind). However, the .50 Beowulf’s primary purpose is as a shorter-range cartridge. Around 200 yards and in is where it does its best work.

When it comes to professional or sporting use, .50 Beowulf has a certain niche. Created for a specific role, within that it can be very useful.

Small Arms Review wrote in 2013, the .50 Beowulf found use by a limited number of military personnel in the field. Though very little has emerged since then on any further field use.

From a military or LE standpoint, the caliber has narrow applications. The best use-case would be for CQB, breaching, and checkpoints where vehicle defeat (stopping the vehicle or shooting through to the occupants inside it) were ballistic needs.

The most obvious benefit, of course, is that the operator can just swap an M4 upper for a .50 Beowulf upper in seconds. But an additional benefit is the .50 Beowulf (in theory) would abrogate most roles for a combat shotgun.

Just switch uppers, get the same capabilities and not need to know a whole other manual of arms–why bother with a whole other weapon system?

As for sporting use, it has a niche as a hunting caliber. It’s legal in straight-wall jurisdictions, and would certainly be viable for bear defense in Alaska and the select other states with extant grizzly bear populations.

Brush deflection would certainly not concern a hunter ever again!

It’s a bit large for whitetail deer and other medium-sized game such as black bear and hogs. Though mild loads of .45-70 and other large-bore, mild-velocity cartridges don’t destroy as much meat as one might assume.

Why Would YOU Want A .50 Beowulf Rifle?

If you just want one just because…get one! Enjoy it! After all of one’s practical bases are covered in their arsenal, there’s nothing wrong with owning other guns that don’t have a specific purpose. That said, .50 Beowulf may still have something to offer you…

It is a hammer, and anything in close will be bashed flat.

As a game cartridge, it would be an excellent choice for brush hunting where close shots—inside 200 yards—were literally the only shot opportunities you’d be getting and brush deflection was all but assured. It will also excel on larger game such as elk, moose and bears.

It loses some ground to other straight-wall cartridges for medium game. This includes the .350 Legend (which has less recoil and flatter trajectory), .450 Bushmaster and, certainly on a cost basis, a rifled slug gun. The final has similar ballistics but is cheaper to buy and shoot.

It would be an excellent choice of bear rifle in grizzly country. Guides in Alaska are known to prefer heavier, more powerful cartridges like .45-70, .416 Ruger and .375 H&H Magnum. The .50 Beowulf would be a natural fit in that role.

As far as personal defense–either as a home defense weapon or in the ever-popular hypothetical SHTF scenario–the truth is it’s not the best choice in either case.

The problem with rifle cartridges is formal testing indicates many of them are prone to penetration in excess (far in excess in some cases) of the FBI standard of 12 to 18 inches of calibrated gelatin through four layers of denim.

A bullet that does so will exit a body with enough force to injure or kill another person. Since the armed civilian is responsible for every shot they fire, using something like .50 Beowulf for defense with neighbors around carries a lot of unnecessary risks.

The ballistic testing that other calibers have in spades just doesn’t exist for .50 Beowulf. Amature tests aside, there isn’t enough reliable, repeatable information to say it is or isn’t an appropriate choice. Plenty of data indicates other calibers already fit the bill. Therefore, stick with the proven.

As for SHTF…well, the reality is a more versatile caliber, more easily resupplied is more advantageous. 5.56mm, .308, .30-06 and so on are superior in that regard, and not to mention cheaper.

That also presumes a very specific version of “SHTF” that has little to do with probable or remotely possible versions of future events based on reality. Mad Max is a fantastic series of movies, but the way the S is likely to HTF is closer to The Grapes of Wrath than anything else.

The AWS series by Alexander Arms—the company that invented the cartridge—is their top-of-the-line model. It boasts a 16-inch chrome-moly barrel with a threaded muzzle and thread protector and a mid-length gas system.

The furniture is by Magpul (CTR stock, MOE grip and winter trigger guard) with a Radian charging handle, Midwest Industries M-LOK handguard, and a 3-pound single-stage trigger by Velocity Precision. You can add your choice of a tank or pepper pot brake or a Millennium compensator. It ships with one 7-round magazine, and while the price may be high, at least all Alexander Arms rifles come with the option of a free hat.

ExoticAR15 specializes in .50-caliber AR-platform rifles and pistols, chambered in 12.7x42mm for the reasons mentioned rather than the official .50 Beowulf. In any event, their rifles offer a bit more in terms of features for the price paid.

A mid-length gas 16-inch barrel is free-floated with a Timber Creek Heart Breaker Tanker muzzle brake standard on most models. The upper and lower are matched for zero play, as well as color-matched, with a 12-inch M-LOK railed handguard.

A Daniel Defense stock and Magpul MOE grip make up the furniture, along with an ambidextrous safety, anti-walk pins and an adjustable competition trigger.

The rifle is offered in several different colors of Cerakote finish, and an 18-inch barrel model is available as well.

The Highlander is Alexander Arms’ pistol version, with an SB Tactical SBA3 brace and Ergo rubber grip. The M-LOK handguard is made by TCE for Alexander Arms.

The Highlander pistol has a 12-inch barrel, with a threaded muzzle and thread protector on the base model. You can add your choice of muzzle device as mentioned above, as well as a 3-pound single-stage Velocity trigger. Like the rifle, it’s also offered with different Cerakote finishes and ships with a 7-round mag.

Alexander Arms’ entry-level model is the Hunter Standard. The rifle has a 16-inch barrel and mid-length gas system, with an Alexander Arms-branded handguard with M-LOK slots at the 9- and 3-o’clock positions. Furniture is an Adaptive Tactical stock, an ergonomic rubber grip and a mil-spec charging handle, safety and trigger.

It’s a more basic black rifle with a black anodized finish instead of Cerakote. However, you have the option to upgrade by adding a muzzle device or a Radian Raptor ambidextrous charging handle.