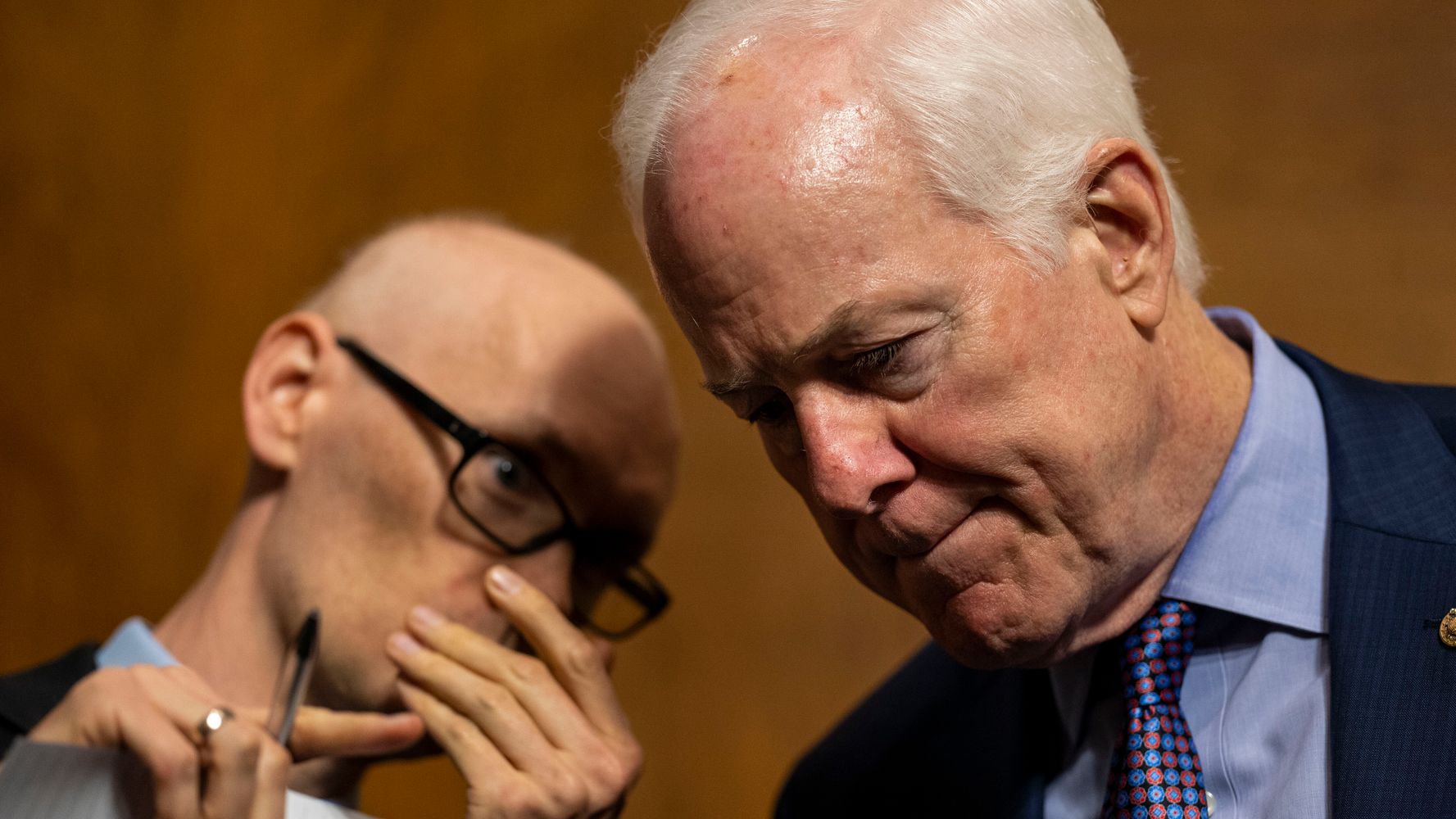 WASHINGTON — This week, the Senate passed a modest gun safety and mental health bill with the support of a big bipartisan majority, a feat that once seemed unthinkable.

Amid national anguish over shootings in Buffalo, New York, and Uvalde, Texas, and increased public support for common-sense steps to stop guns from getting in the hands of the wrong people, 15 Republican senators decided to buck extreme gun groups like the National Rifle Association and support the Bipartisan Safer Communities Act.

“We’ve had one shooting after another. More are coming. When people say, ‘Can’t you do something?’ the answer is yes,” Sen. Lindsey Graham (R-S.C.) said Wednesday.

“If you consider yourself a supporter of the Second Amendment, you absolutely want to do something about Uvalde,” explained Sen. Bill Cassidy (R-La.).

Peter Ambler, the executive director of the gun violence prevention group Giffords, had a blunter answer: “John Cornyn and company didn’t want to be standing next to Ted Cruz saying that the only answer in the aftermath of 19 dead kids in Uvalde is fewer doors. The gun lobby and their allies have run out of excuses.”

The legislation is historic but fairly limited. It would bolster mental health care, enhance background checks for people under 21, incentivize states to adopt “red flag” laws, improve school security measures and prohibit romantic partners convicted of domestic violence who are not married to their victim from getting firearms. The bill is expected to pass in both the House and Senate as early as this week and be signed into law.

The big question, for both Republicans and Democrats, is whether this is the start of a trend or a one-off event.

Sen. Chris Murphy (D-Conn.), one of the main authors of the legislation, has sold the bill to liberal voters and his fellow senators as a necessary first step to convince Republicans to adopt more stringent gun control measures. Once Republicans see that the political sky won’t fall on them when they agree to compromise on gun restrictions, they will find it easier to come back to the table in the future, Murphy has argued.

“We’ve spent four weeks, 24/7, putting this legislation together,” Murphy told activists at a rally for the legislation on Thursday. “We were not going to let 30 years of inaction stop us. And so, we have an answer today. We have an answer – it’s not a complete answer, but it is an answer that allows us to tell families all across this country that the era of inaction is over.”

“I think it could. I’m not saying it will,” he said when asked if this represented a shift in the GOP’s attitude. “But when they see that, in effect, there’s more political gain than disadvantage in doing the right thing on guns, but also a sense of personal emotional reward, from standing up and saving lives. You know, what we do around here doesn’t usually save lives.”

Most Republicans, however, are suggesting this is a one-off measure that will take broader gun control measures, such as universal background checks or an assault weapons ban, off the table.

“Democrats are counting on this having changed the attitude toward guns – that’s probably not the case,” Utah Sen. Mitt Romney told HuffPost.

“They shouldn’t say that because this is the effort that is going to get over the finish line,” Iowa Sen. Joni Ernst added when asked about Democratic expectations about further action on guns.

Senate Minority Leader Mitch McConnell, who also voted for the bill, essentially argued that the legislation owned the libs.

“For years, the far left falsely claimed that Congress could only address the terrible issue of mass murders by trampling on law-abiding Americans’ constitutional rights,” the Kentuckian said. “This bill proves that false.”

Sen. Lisa Murkowski (R-Alaska) said voters in her state wanted to crack down on criminals’ use of weapons without infringing on their own Second Amendment rights.

“What held this effort together was a recognition that, look, you’re not going to make any headway if we undercut Second Amendment rights for Alaskans and law-abiding folks,” Murkowski told reporters.

Republicans also waved off objections from the NRA, which claimed that the bill would open the door to more gun control. They credited other gun advocacy groups like the National Shooting Sports Foundation for helping draft some of the legislation’s most contentious provisions. (The NRA, battered by scandal and financial problems, has declined in influence in recent years, while the NSSF has risen.)

At the same time, there is a clear political risk for Republicans. Texas Sen. John Cornyn, one of the main GOP negotiators, was met with a chorus of boos at his state party convention last Friday. Another Republican, Rep. Chris Jacobs (R-N.Y.), endorsed a ban on assault weapons after a mass shooting at a supermarket in his Buffalo-centric district. He announced his retirement less than a week later.

And Florida Sen. Rick Scott, the chair of the National Republican Senatorial Committee, attacked the legislation as “soft on crime” — actually arguing the legislation does not do enough to keep guns out of the hands of domestic abusers, essentially aligning himself with Democrats who wanted to do more.

Some McConnell allies are spreading the message that the political waters are safe. Common Sense Leadership Fund, a Republican nonprofit run by a former executive director of the NRSC, released a polling memo last week arguing the provisions of the legislation — specifically, closing the so-called “boyfriend loophole” and encouraging states to adopt red flag laws — were popular even in gun-owning households.

The group’s survey, conducted by a number of GOP polling firms, found that 86% of voters in gun-owning households supported closing the boyfriend loophole and 79% supported federal encouragement of red flag laws.

It’s unclear what will happen next: While the NRA has slammed the gun safety deal as “fall[ing] short at every level,” its resources are limited to wage a campaign against the senators backing it.

Former President Donald Trump has attacked the legislation “as the first step in the movement to TAKE YOUR GUNS AWAY,” but it’s rare for an issue other than false allegations of election fraud to draw Trump’s sustained attention. And it’s unclear how many House Republicans plan to back the legislation.

If gun rights activists are able to wage a lengthy and vociferous campaign against an otherwise popular compromise and the Republicans who backed it, Democrats are hoping to use it as a permanent wedge between the GOP’s relative centrists and a gun movement dominated by the far right.

“I think we could see a schism emerge between the gun rights community and the governing wing of the Republican Party,” Ambler said.

The other variable is the public’s reaction. While support for the legislation in opinion polling is high, so is support for even stricter measures: Eighty-three percent of respondents to Common Sense Leadership Fund’s poll of gun-owning households support universal background checks, for instance.

Republicans are apparently hopeful this bill instead puts gun control to bed as an electoral issue. Democrats have used gun control as a winning issue among suburban swing voters, especially during their 2018 midterm wave election. And they plan to do the same in 2022.

“We know we can move votes on this issue if voters are aware of the contrast,” Ambler said, pointing to polling from the moderate Democratic group Third Way. The group’s surveys in key swing states, including North Carolina and Pennsylvania, found strong support for gun control measures.

There is clear past precedent for how Republicans who back gun control legislation can thrive politically. Retiring Sen. Pat Toomey (R-Pa.) won reelection in 2016 thanks in no small part to a $20 million campaign put together by billionaire Michael Bloomberg, one of the country’s biggest gun control advocates. A Bloomberg-affiliated group coated the airwaves in Philadelphia with an ad featuring a Sandy Hook shooting survivor, while Toomey’s own campaign quietly highlighted his support from the NRA in more rural parts of the state.

Will Republicans who back the law receive — or need — a similar boost in their reelection campaigns over the coming years? Major gun control groups gave little indication about their plans.