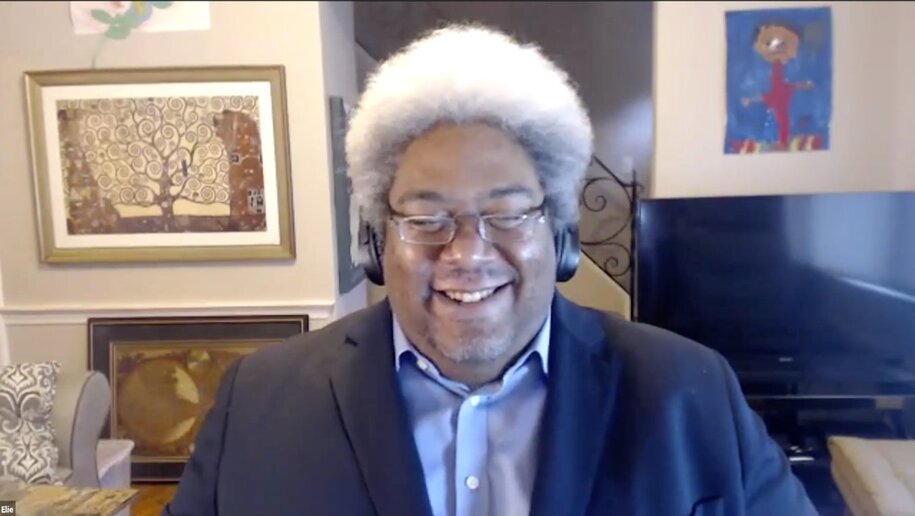 As the nation witnessed over the last few weeks, Supreme Court and the Constitution wield so much unchecked power to shift and codify or remove the laws of our nation. Yet, Mystal argues, conservatives have a level of reverence for the Constitution that doesn’t mirror the reality of its inception. As he wrote in his book, “You rarely see liberals make the point that the Constitution is actually trash. Conservatives are out here acting like the Constitution was etched by divine flame upon stone tablets, when in reality it was scrawled out over a sweaty summer by people making deals with actual monsters who were trying to protect their right to rape the humans they held in bondage.”

The lifetime appointment of justices to the Supreme Court is also problematic, he added, explaining that “the idea that these people serve for life, they serve for life without accountability, that’s a huge problem in our modern context.”

Mystal also expounded on the inconsistencies and unfair nature of the existence of the Supreme Court as it currently stands, without any checks and balances:

What kind of democracy are you running when people don’t even get to vote for their president directly? When the person who wins the most votes for the presidential election doesn’t always end up being the president? How is that rational, and as I’ve already said, how is it such a great constitutional checks and balances of power when you have once branch of government that’s unelected, unaccountable, yet can veto the other two branches and is appointed for life? Like, how great was that document, really? When you break it down and look at it kind of line by line, point by point, some good ideas, some really dumb ideas, and a bunch of ideas that haven’t ever been applied equally to everybody living here just for a day.

“The idea that there are Constitutional loopholes should frighten everybody,” he added.

Moulitsas shifted the conversation to the Second Amendment, focusing on language that delineates the right to a “well-regulated militia.” Mystal offered a quick rundown of the history of the amendment and how recently its interpreted meaning has shifted to protect the right to bear arms for self-defense:

Originalists do what they often do, which is that when they’re confronted with history they don’t like, they just make something else up. The current understanding of the Second Amendment — the current conservative interpretation of the Second Amendment — was invented by the NRA in the 70s, in the 1970s. Because for the first 200 years of American jurisprudence, the idea that firearms and weapons should be regulated, and the idea that you had a right to bear arms, was not in any conflict, right? There were gun regulation laws throughout our entire history. Franklin Delano Roosevelt had one of the most famous ones, right? Where he’s the one who kind of invented classifications — that’s a shotgun, that’s a rifle, that’s a handgun. The idea that the government had a role in regulating arms sales goes way, way, way back in our history.

But in the 70s, the hardliners in the NRA kind of took over that organization. In the 1950s, the NRA is kind of just like, ‘I like to shoot Bambi’s mom.’ And it turns into this lobbyist thing in the 70s when hardliners take over. They call it the revolt in Cincinnati, and they, through their marketing campaign, essentially invented the right to bear arms for personal self-defense. And that right was never articulated in a Supreme Court precedent, ruling, whatever, until 2008. Just to give you a sense of how recently we’re talking about, right? It wasn’t until they elected a Black man president that suddenly the originalists came up with a right to bear arms for personal self-defense. That was invented by Scalia in 2008. That goes back to the NRA in the 1970s. That’s not from American history. Do you know why the Second Amendment is there from American history? It’s to stop slave revolts.

Mystal believes that the Constitution is a living, breathing document that should expand and shift and change with the times. And with Roe v. Wade at risk of being gutted in an expected decision later this summer, that could set the stage for so many other landmark decisions to be overturned, taking away access to birth control, the right to gay marriage and interracial marriage, and much more. “[Conservatives] have spent a generation building a Supreme Court to do this, and now they have it, and now they’re winning, and this is what we’re left with,” he said, sounding the alarm on how many rights are at risk.

“We started with this idea that we revere and lionize the Supreme Court and the Constitution. We’re talking about rights that were decided 5-4, 6-3. It’s a majority of three people deciding what rights hundreds of millions of people have. How is that a just system?” Moulitas posited.

The Supreme Court would also taking away rights that were popularly voted on before, Mystal added:

You can also listen to The Brief  on any of the following platforms: