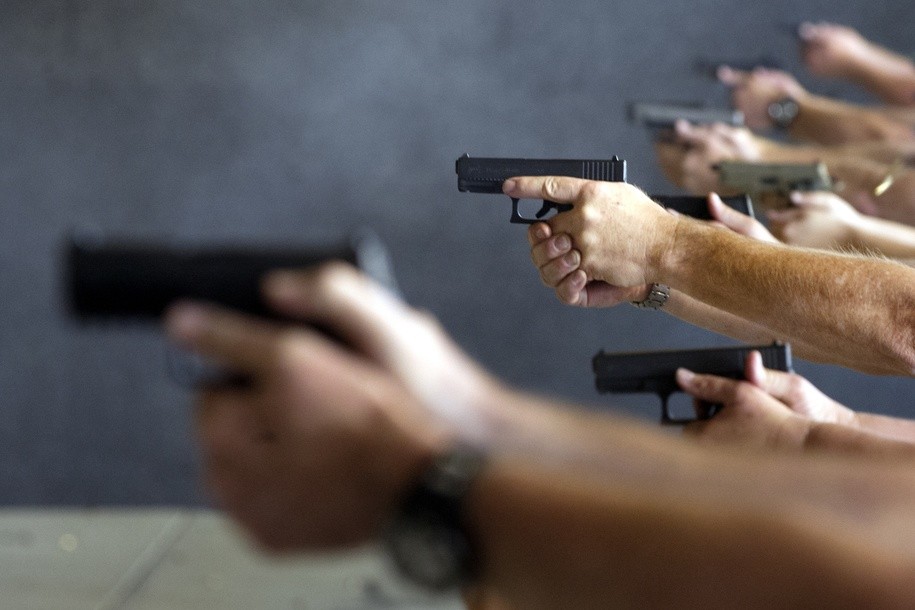 At issue in Bruen is New York’s 108-year-old Sullivan Act, which mandates that anyone who wants to carry a concealed handgun in public has to show “proper cause” to obtain a license permitting this. What that specifically means is left legislatively undefined, but over the years, New York courts have held that failure to “demonstrate a special need for self-protection distinguishable from that of the general community or of persons engaged in the same profession” is a good enough reason to deny a permit. Just having a rash of robberies in the neighborhood, which is at the root of the Bruen case, is not a “proper cause” for granting a permit, according to the lower court’s ruling.

But the appellate courts are split on the constitutional legitimacy of such good cause or good reason laws, having both overturned and upheld similar state gun regulations. That leaves it to the Supremes to sort out.

The NYSRPA (which is the local National Rifle Association affiliate) and a trainload of amicus briefs—including several from members of Congress—are arguing that the Sullivan Act flat-out violates the Second Amendment. For instance, the right-wing Mountain States Legal Foundation says “it’s not a right if you need a permission slip.” Mark Sherman reports:

“An expansive Second Amendment ruling by the Supreme Court could restrict or prohibit the sensible solutions that have been shown can end gun violence,” said Jonathan Lowy, vice president and chief counsel at the gun violence prevention group Brady. Lowy included state laws requiring a justification to carry a gun as examples of such “sensible solutions.”

A district court dismissed the NYSRPA complaint and last year, the Second Circuit upheld the dismissal. In their certiorari petition asking the Supreme Court to review the case, the plaintiffs clearly demonstrate that they favor an expansive ruling. The question they wanted answered by the justices is “whether the Second Amendment allows the government to prohibit ordinary law-abiding citizens from carrying handguns outside the home for self-defense.” But the justices have limited this to “whether the state’s denial of petitioners’ applications for concealed-carry licenses for self-defense violated the Second Amendment.” But that doesn’t necessarily mean the Court’s ruling will be narrowly drawn.

The Court could, of course, uphold the lower court ruling and let the law stand. Or it might call for New York to rewrite its gun permit law and let the circuit court reexamine it. Or it might choose to go further and order all “may issue” states that grant gun-carry permits under strict rules to adopt a “shall issue” system that automatically grants permits to any applicant who meets certain requirements, such as taking officially approved firearms training and safety. Or it might go still broader and rule that the appellate courts should look at Second Amendment cases differently than they currently do.

In making gun case judgments, all federal district and appellate courts follow a means-end approach, first deciding if the Second Amendment applies in a case and then deciding whether the government has a compelling interest in enforcing a gun regulation, say, for matters of public safety. This “balancing” approach is a test particularly hated by gun rights advocates who favor the view of many conservative legal scholars who want the test to be solely based on history, text, and tradition, an originalist stance.

Last year at The Trace, Olivia Li dug into how the Court might rule on gun cases with Amy Comey Barrett and Brett Kavanagh on the high bench:

One of the first high-profile evocations of the history, text, and tradition test came from Justice Brett Kavanaugh, Trump’s last appointee to the high court. When he was a judge for the D.C. Circuit, he wrote a dissent in a case on Washington’s ban on semiautomatic rifles, calling on courts to stop considering modern public safety concerns in their Second Amendment analyses. He wrote, “In my view Heller and McDonald leave little doubt that courts are to assess gun bans and regulations based on text, history, and tradition, not by a balancing test.” Kavanaugh went on to conclude that, because laws have allowed civilians to own semiautomatic rifles since the early 20th century, they should be protected by the Second Amendment today.

That wasn’t the view of Justice Ruth Bader Ginsburg. She was one of the four justices who dissented on Heller. In a 2013 interview with John Hockenberry at WYNC, she said, “I view the Second Amendment as rooted in the time, totally allied to the need to support a militia. So my answer would be, yes, the Second Amendment is outdated in the sense that its function has become obsolete. And, in my view, if the Court had properly interpreted the Second Amendment, the Court would have said that Amendment was very important when the nation was new, it gave a qualified right to keep and bear arms but it was for one purpose only, and that was the purpose of having militiamen who were able to fight to preserve the nation.”

That, of course, goes opposite the direction we appear to be headed in. Indeed, Justice Antonin Scalia, who wrote for the majority in Heller—his opinion dense with references to history and tradition—made a point of saying that it is not up to the Supreme Court to decide that the Second Amendment is extinct, as Ginsburg would have it. Both those justices have gone to the Great Beyond and been replaced by two ultra-conservatives. The Court’s hard-right turn makes a seriously expansive ruling in Bruen quite possible. But maybe not. Anyone who hasn’t been surprised by at least one ruling by the Supremes in the past, say, 30 years, must be genuinely psychic.

Along that line, Jake Charles, executive director at the Duke Center for Firearms Law, offers a caution about assuming the conventional wisdom among commentators that the justices will toss Sullivan:

That seems to be the assumption of commentators who see the decision to take this case as a victory for the conservative justices who have been looking to expand gun rights since shortly after Heller was decided. But it is not entirely clear that that will be the outcome. For one thing, the justices can often issue surprising rulings, like last Term’s majority decision by Justice Gorsuch in Bostock v. Clayton County. For another, the history of good-cause licensing laws for concealed carry is rich and widespread. New York’s law has continued in substantially the same form since 1913. That 108-year history dwarfs the lifespan of several other laws that Justice Scalia in Heller called “longstanding” exceptions to the Second Amendment’s scope. Historians who study the history of gun regulations note that good-cause or may-issue regimes more broadly trace their history back even before New York’s adoption of such a law at the turn of the century. Dubbed the “Massachusetts model” after its progenitor, these laws spread after the Civil War and were commonplace in the early 20th century. Because history will play an important role in the decision no matter what methodology the Court ultimately uses, this background will likely be debated among the justices, the parties, and the scholars filing amicus briefs in the case. (It is also worth pointing out that the Court limited the question presented to “[w]hether the State’s denial of petitioners’ applications for concealed-carry licenses for self-defense violated the Second Amendment.” It therefore does not appear inclined to address the open carry issue and will instead need to confront the statement in Heller that appears to have suggested that states could constitutionally ban concealed carry altogether.)

“Here … not only is there a long tradition of regulating public carry, but even the uncontested history is longstanding: The petitioners do not dispute that dozens of states and cities from the mid-19th-century to the early-20th century enacted laws that were at least as restrictive -4- as New York’s law. When this unrebutted history is added to the long tradition of public-carry regulations, there can be no doubt that New York’s law is constitutional.” …

“To set aside the body of historical evidence in this case, while claiming the mantle of originalism, would only serve to diminish it—reducing the methodology to little more than an exercise in picking out one’s friends in a crowd of historical sources.”

If the justices decide to uphold the law or restrict themselves simply to overturning Sullivan in a narrow ruling, that would leave hanging the plaintiffs’ preferred question, the one left unanswered by Heller: Does the Second Amendment make the carrying of a firearm outside the home a right?

Some gun rights advocates will not be happy no matter how the Bruen ruling comes down unless it goes the whole way to “constitutional carry”—that is, no permits or licenses required to own and carry a firearm in public, concealed or in the open, with the only exceptions being felons and those adjudicated as dangerously mentally ill. As these absolutists would have it, we should make the whole nation like Dodge City before its city council passed an 1878 ordinance prohibiting the carrying of firearms. While some members of the Court might say okay to that, it’s hard to imagine the majority doing so. After all, even Scalia conceded in Heller that some gun restrictions could pass constitutional muster.

In June, social media was brimful of appalled people who vowed never to visit the Lone Star State again after Texas Gov. Greg Abbott signed a no-permit, no-training-needed, constitutional-carry gun bill into law. The trouble with this boycott Texas idea? It leaves out the other 20 states that have similar laws, with Tennessee as well as Texas being added in just the past few months.

This legislative drive to dump permits is a relatively new development, but its roots go back more than four decades when a cabal of absolutist Second Amendment advocates gained control of the National Rifle Association and transformed it into a powerful reactionary force as the most successful of the gun lobbies. While the NRA has been recently dogged by in-fighting, alleged corruption, and free-spending leaders acting like royalty, its agenda has nonetheless continued to make tremendous progress both at the federal and state levels.

Starting in 1985, the NRA began a campaign to change state laws regarding permits to carry concealed firearms. As the map below shows, at the time, 16 states—including Texas—would not issue such permits at all, 25 could issue them but usually did so with wide discretion under strict rules (the so-called “may issue” states); eight would issue them to nearly anyone who could legally own a firearm (“shall issue” states); and one, Vermont, required no permit and never had. The initial push was to get those 41 states into the “shall issue” category.

Consequently, the map changed dramatically over the next quarter of a century. Alaska adopted the Vermont model in 2003. By 2010, only two states still would not issue any concealed carry permits, two required no permits, nine were in the restrictive “may issue” category, and 37 in the lax “shall issue” category. The NRA and other advocates cranked up the next phase of the campaign: Now their focus was on getting rid of permits altogethe. As noted, 21 states have now adopted “constitutional carry,” although some make exceptions such as limiting this right to state residents only.

An all-green map is the NRA’s end goal. Sometime between now and next June, we’ll find out how far the Supreme Court is willing to go to assist that project.