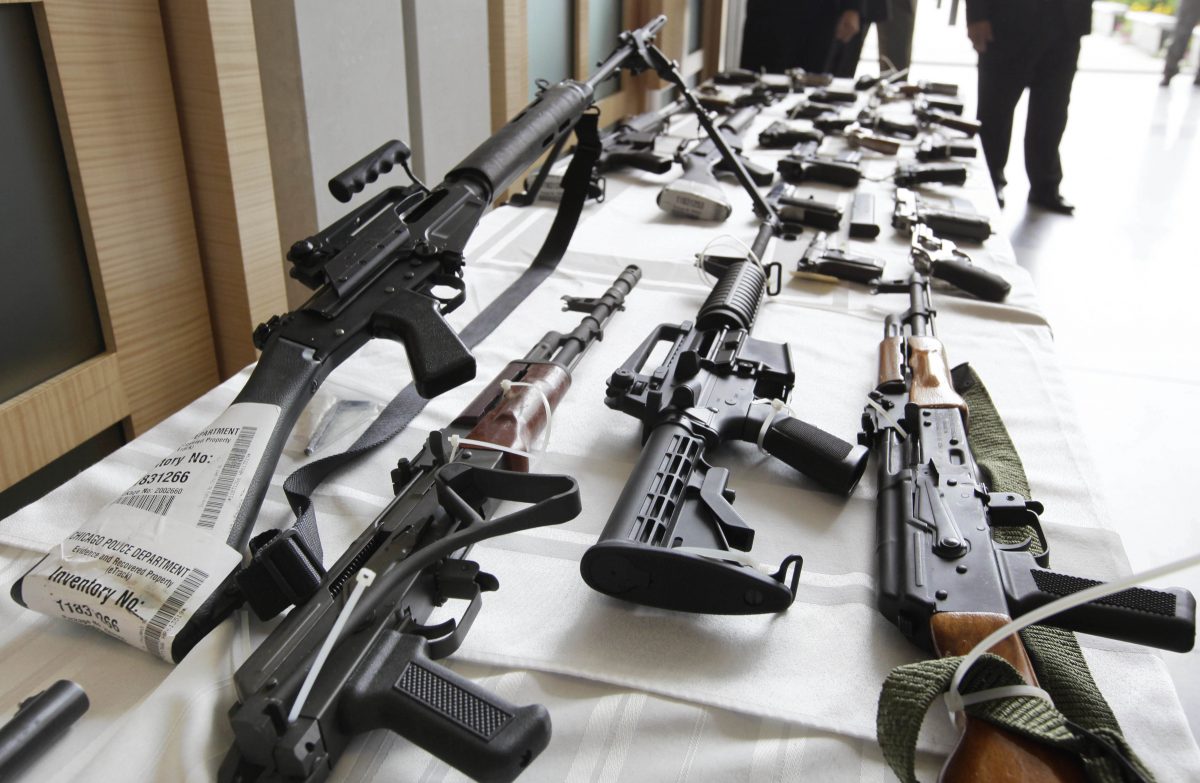 LAS VEGAS—With the Biden administration touting a revival of the 1990s-era “assault weapons” ban and encouraging states to tighten gun-control regulations, the firearms industry and gun-owners’ rights advocates—with notable exceptions—say Congress and state lawmakers should instead focus on keeping weapons out of criminals’ hands and on boosting mental health programs.

For more than a decade, rather than imposing new laws that could ensnarl 75 million law-abiding American gun-owners in confusing red tape, the National Shooting Sports Foundation (NSSF) has spearheaded a “Fix NICS” campaign to address flaws in the National Instant Criminal Background Check System (NICS)—the primary databank used to varying degrees in all 50 states and territories to conduct background checks for firearms purposes.

The NSSF, which represents more than 10,000 businesses and individuals engaged in the $70.5 billion United States’ firearms industry, maintains that NICS background checks often produce data not relevant to determining if someone is prohibited from purchasing firearms, while not providing information related to a prospective gun-buyer’s documented mental health background.

Beginning in 2012, the NSSF led a bipartisan array of groups—including many that are traditionally polar antagonists in the gun-owners’ rights vs. gun-control debate—in supporting a federal bill requiring documented mental health information be included in background checks for prospective firearms buyers.

In the wake of a November 2017 shooting in Sutherland Springs, Texas, that left 26 dead, investigators discovered that perpetrator Devin Patrick Kelley should never have been legally allowed to possess firearms because he had domestic violence convictions and court-ordered mental health involuntary commitments before being leaving the U.S. Air Force with a bad conduct discharge.

The Air Force never lodged that information with the National Crime Information Center (NCIC), which the FBI scans when doing NICS background checks.

Kelley’s criminal record and potentially “prohibitive mental health dis-qualifiers” therefore did not appear when he underwent a NICS background check and legally purchased the firearms used in the shooting.

Those disclosures spurred bipartisan Congressional support for the proposed “Fix The NICS Act,” which was adopted within weeks of the Texas shooting in late 2017. Former President Donald Trump signed it into law in March 2018.

Under the bill, when doing NICS background checks, the FBI must now scan a third dataset. Along with the NCIC and the Interstate Identification Index (III), the FBI must also include any documents uncovered in a “NICS Indices” search.

The NICS Indices dataset is where records that include “prohibitive mental health dis-qualifiers” would be found. These records include criminal and civil charges against a person involuntarily committed to a mental institution, found insane by a court, or adjudicated “mentally defective.”

Those deemed “mentally defective” are found to have subnormal intelligence, a mental illness, or a condition that makes them incompetent to manage their own affairs or, in extreme cases, to be a danger to themself or others.

Gun-owner rights groups also raised issues regarding privacy and fairness in the measure, part of a growing wave of federal and state “red flag laws.”

Mental health and gun-owner advocates successfully lobbied to ensure a process to challenge and remove “disqualifying” information was incorporated into the bill.

Under the 2018 “Fix the NICS Act,” federal agencies—such as the U.S. Air Force in Kelley’s case—are required to “populate relevant data” in the NICS Indices section of the background check.

The bill mandates that federal agencies do so, but does not require state, local, tribal agencies, or courts to report mental health rulings in NICS background checks. The measure offers state and local agencies incentives for “populating” the NICS Indices section with relevant data but gives them discretion in the degree of participation.

In fact, only 31 states and the District of Columbia rely completely on the FBI to do background checks for prospective gun-owners using NICS. The other 19 states either partially use the FBI or have their own dedicated state agency review of data supplied in NICS background searches.

Also since 1998, from those 443 million background checks, NICS has denied gun sales to 3 million prospective buyers deemed “a prohibited person” from legally possessing a firearm.

With the addition of more than 9.7 million “disqualifying mental health records” added to the system as of December 2018, the NSSF reports a 700 percent increase in denials between 2019-21 in gun sales to people with “prohibitive mental health dis-qualifiers” in their backgrounds.

During a forum attended by seven governors at the NSSF’s 45th annual Shooting Hunting Outdoors Trade (SHOT) Show, which ended its four-day run on Jan. 20 in Las Vegas, NSSF Senior Vice President of Government Relations and General Counsel Lawrence Keane touting the success of the 2018 ‘Fix The NICA Act’ and the 2022 adoption of a another bipartisan gun safety bill.

Keane said that after the 2018 bill was adopted, 17 state legislatures changed their background check requirements to include mental health records and now 47 include that data in pre-buy searches.

Only three states have not done so—New Hampshire, Montana, and Wyoming. With Montana Gov. Greg Gianforte and Wyoming Gov. Mark Gordon sitting on the panel before him, Keane took the governors to task for not actively lobbying their state lawmakers to incorporate the federal bill’s mental health requirements into their state process.

“We would love to work with you to ensure the appropriate records are put into the system,” he told the governors, calling opposition by the NRA and other “Second Amendment advocates” short-sighted.

Gov. Gordon, who had noted earlier in the forum that Wyoming has, per capita, the highest percentage of ambient gun ownership in the nation, said there’s little trust among Wyomingites and their elected representatives in Cheyenne that government—the federal government especially—can competently solve a problem without making it into a bigger mess.

Wyoming residents express “a lot of concern anytime the government gets involved” in anything and there is no appetite among lawmakers now meeting in their 2023 session to adopt such a measure, Gordon said.

Such a bill has not been introduced in the Wyoming Legislature this year and Gordon did not appear eager to sponsor a legislative initiative to get one on the books.

Nor did Gianforte, who did not respond to Keane’s prodding about Montana’s legislature being among the three that have not incorporated components of the 2018 “Fix the NICS Act” into state law.

Unless lawmakers introduce a bill themselves, it appears unlikely that Gianforte would be a willing candidate to arm-wrestle any action in his state, where the majority of voters likely have similar views as neighboring Wyoming: the less government and fewer regulations, the better.

Gianforte said that the general view of Congress and state lawmakers in Montana is the less heard from, the better. Most Montanans—Westerners, overall—reflect that view, he said, misattributing newspaper editor Gideon John Tucker’s quip, “‘No man’s life, liberty, or property are safe while the legislature is in session’” to Mark Twain.

“We are blessed in Montana with a legislature that only meets for 90 days every two years,” Gianforte said. Yet much gets done, such as eliminating corporate taxes on Montana’s businesses and adopting 550 bills over its last two sessions, with two-thirds garnering 80 to 100 percent support.

Bills seeking to impose any further gun-control regulations on the state’s firearms-bearing residents would derail that efficient legislative pace in Montana, Gianforte implied.

“Any data base is only as good as the information put into it,” Keane said, imploring the governors to assert themselves with lawmakers to incorporate mental health records into background checks for prospective gun buyers.

Keane also lobbied all seven governors and lawmakers nationwide to update background check systems to include components from “The NICS Denial Notification Act” adopted by the U.S. Senate in March 2022 and now in the House Judiciary Committee.

The bill is cosponsored by Sens. Chris Coons (D-Del.) and John Cornyn (R-Texas), both members of the Senate Judiciary Committee, with 14 additional cosponsors—seven Democrats and seven Republicans.

The bill seeks to help states enforce existing laws against prospective gun buyers who know they are prohibited from legally purchasing a firearm but “lie and try” to do so on their background check.

The measure requires federal authorities to alert state and local law enforcement within 24 hours when a prohibited individual fails a background check while attempting to purchase a firearm.

The bill and others related to the background check system are not merely a way for gun-owners advocates to steer gun-control policy away from restrictive regulations, but to effectively address gun violence and suicide by those struggling with mental illness.

NSSF Senior Director of Communications Bill Brassard told The Epoch Times the firearms industry is focused on mental health with at least seven organizations committed to gun safety, suicide prevention, and mental health services among the more than 2,400 exhibitors that attended the SHOT Show.