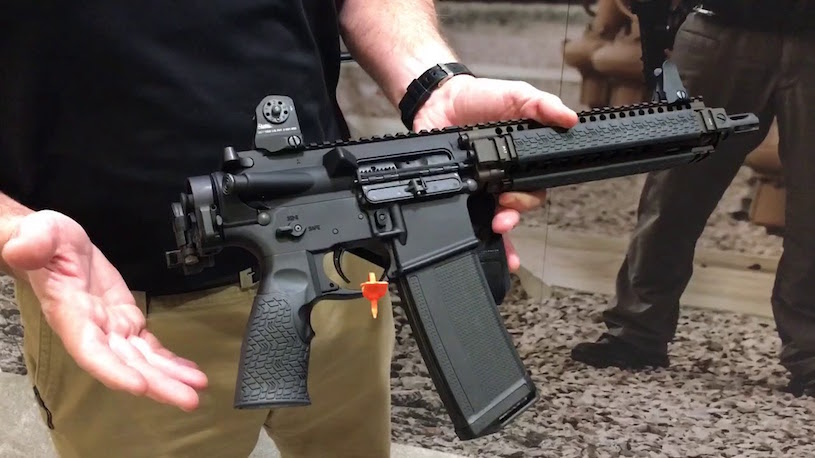 What exactly makes an AR15 pistol rather than a rifle or carbine? There’s a lot of confusion regarding this subject, especially when you take into account the complex rules set by the ATF. So before we dive into the best AR 15 Pistols, let’s talk about what defines a AR Pistol.

What is the difference between an AR 15 pistol vs. rifle? There are some basic differences. An Ar 15 pistol has a stabilizing brace attached to the receiver extension rather than a traditional butt stock. The AR 15 pistol also has a barrel less than 16” long.

Basically though, an AR-15 pistol is an AR-15 that was built to have a barrel under 16 inches and, and this is critical, without a stock.

Instead of a stock, the AR15 pistol will have a stabilizing brace, or otherwise no brace at all.

In general, an AR15 pistol needs to meet these qualifying points to be legally classified as a pistol:

In addition, vertical fore grips are only legally allowed on AR-15 pistols if the overall length of the weapon is at least twenty-six inches.

If that rifle has a stock on it, then it is classified by the ATF as being a short barreled rifle, and is not legal unless with special licensing.

An AR-15 pistol is only legal to own by normal United States civilians WITHOUT a stock. Without a stock, it turns, legally speaking, into a pistol. But granted, people often equip their AR-15 pistols with arm braces or stabilizing braces that can also act as a stock, even though they are meant to be wrapped around the upper arm as an improvised stock.

Why would you want to own an AR-15 pistol over a carbine or rifle? The short and simple answer is that it’s much smaller and is thus much more wieldy in tight corners. It’s also a very effective home defense weapon for this very reason. That’s also all not to mention that it’s a very fun gun to shoot as well.

Here are some of the best AR-15 pistols on the market today that you can own:

Bravo Company has been in the business of selling AR-15 since the early 2000s. Today, they are widely regarded as one of the premier AR-15 manufacturers on the market.

The RECCE-11 KMR-A Pistol is built entirely out of machined aluminum parts, for both the lower. and upper receivers. The exterior of the rifle is additionally coated in a special anodized finish for superior corrosion resistance.

Bravo Company also utilized a chrome lined finish for the bore and chamber of the RECCE-11, which gives it both superior performance and longevity.

As an added bonus, the gas tube is easily removable. So you can add literally any type of AR-15 pistol brace that you want to it.

As a final positive, the RECCE-11 utilizes a carbine length gas system rather than a pistol one. Which means that it should theoretically have superior reliability as well.

Another premier AR-15 manufacturer is Daniel Defense. The DDM4 MK18 Carbine Pistol is marketed as being an AR-15 pistol that is meant for an AR-15 rifleman or rifle enthusiast. This is because it is built with a carbine length gas system much like the Bravo Company pistol that we just went over, and it also is built to US SOCOM specifications.

The barrel for the DDM4 MK18 is ten inches long and cold hammer forged. This makes it a great choice as a CQB gun, home defense gun, or even as a truck gun.

The DDM4 MK18 also includes a bolt-up operating system, which has been validated by United States military units and. Was designed to improve reliability. It also features Daniel Defense’s trademark pistol grip with an integral trigger guard and excellent ergonomic molding.

Overall, this is a very light and reliable AR-15 pistol that is built to last.

The MCX Virtus pistol was designed by SIG Sauer for optimum performance. It comes installed with SIG’s proprietary SB15 stabilizing brace, which ensures that you will be given solid foundational fire, even if you don’t put any optics onto the rifle.

The MCX Virtus also features SIG’s proprietary Matchlite trigger that is incredibly smooth and crisp, with short reset and clean break. The gas-actuated operating system allows SIG to incorporate a rifle caliber like the 5.56x45mm NATO into an overall smaller package.

Yes, the price is high on the MCX but that’s true for most SIG firearms, but you also get what you pay for.

If you are looking for the least expensive AR-15 pistol on the market from a high-level manufacturer, look no further than the Springfield Armory Saint Pistol.

Yes, this is basically the Saint rifle that has been sized down into an AR-15 pistol.

You may also be surprised to hear that Springfield partnered with Bravo Company in order to create this pistol. Specifically, Bravo Company manufactured the grip and trigger guard for the weapon, which gives the Saint pistol overall excellent ergonomics.

Last but certainly not least, the Saint pistol also comes installed with a smooth, single stage trigger and a heavy tungsten buffer and internals that have further been coated in a tough, anti-rust melonite finish

One option you might consider, especially if you are looking to acquire an AR15 pistol economically is purchasing a AR15 Pistol Kit. A pre-packaged AR15 component kit can save you time, money and reduce the number of tools needed. The process is nearly identical to building a custom AR rifle.  The NRA has a great article that can take you step by step to building a AR15. One of the kits we would highly recommend is the PSA 10.5″ CARBINE-LENGTH 5.56. A great budget minded, easy to assemble kit.

In short, an AR-15 pistol is an excellent choice if you are looking for an overall smaller AR-15 that you can use for either home defense or tactical training purposes. Any of the makes and models of AR-15 pistols that we have covered in this article should be a great choice for anybody.