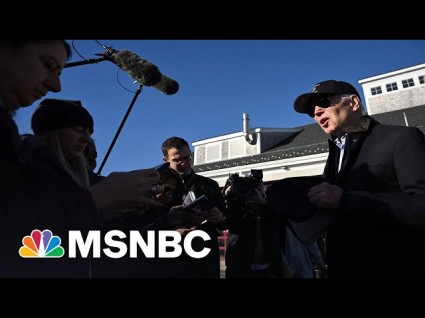 I hope he can pull this off, but I don’t think the votes are there. Still, Joe Biden has done things no one believed he could do. Via the Daily Beast:

President Joe Biden said in a brief press gaggle on Thursday that he’ll “count votes” in an attempt to pass through a federal assault rifle ban in a lame-duck session of Congress this winter. “I’m going to try and get rid of assault weapons,” Biden said, according to MSNBC. “The idea we still allow semiautomatic weapons to be purchased is sick, it’s just sick. It has no social redeeming value, zero, none. Not a single, solitary rationale for it.”

The declaration came after one of the most violent stretches of gun violence in recent memory, with shootings at a Walmart in Virginia, the University of Virginia and an LGBTQ club in Colorado—all within the last two weeks—claiming the lives of 14 Americans. Speaking from Nantucket, Massachusetts, on Thanksgiving, Biden also said he believes there is enough support in Congress to provide further aid to Ukraine. He closed his remarks by adding that oil price cap talks for Russia are still “in play.”

Unfortunately, I have covered mass shootings multiple times in my career. This is the first time I can recall getting message after message from viewers like this. pic.twitter.com/w3uPqLERyn