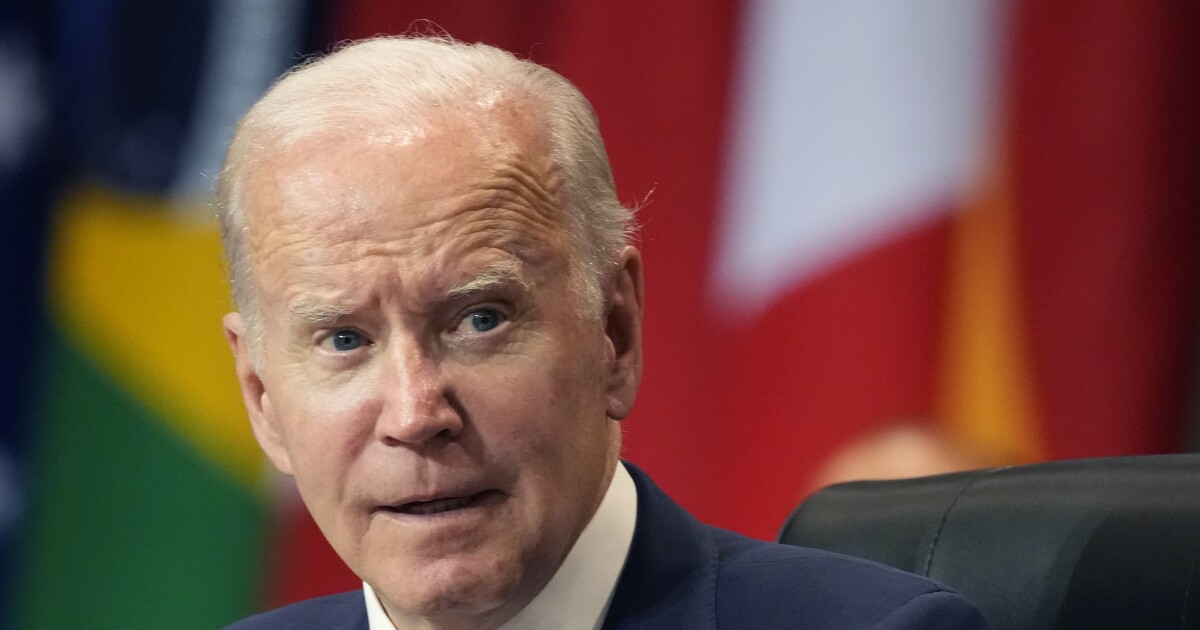 Democrats are embracing progressively tougher
gun control
talk, as pollsters predict the issue could persuade the critical demographic of independent women to vote for or against Republicans in
2024
.

But in the meantime,
President Joe Biden
will likely break the promise he made during the 2020 and 2022
midterm campaigns
to ban assault-style weapons before Democrats relinquish their control of
Congress
.

The
White House
has underscored how Congress passed the Bipartisan Safer Communities Act last summer during Biden’s administration. But Republican strategist Doug Heye does not think history will repeat itself anytime soon regarding gun reform as
House Minority Leader Kevin McCarthy
(R-CA) prepares to accept the gavel if he receives enough votes in January from his conference.

“He’ll continue to talk about it because it’s popular with the base and a sizable chunk of independents voters — whether it’s a voting issue for them is a different matter — and allows him to use that against a GOP House in the run-up to his potential 2024 campaign,” Heye, a former
Republican National Committee
communications director, told the Washington Examiner of Biden.

Political commentator Costas Panagopoulos is more optimistic Congress will build upon the Bipartisan Safer Communities Act after last week’s two mass shootings, one at a gay nightclub in Colorado and another at a Walmart in Virginia. That legislation closed the so-called boyfriend loophole, incentivized the introduction of red-flag laws, and rolled out enhanced background checks for people younger than 21.

“With new mass shootings seemingly on each passing day, it may get harder and harder for Republicans to resist,” Panagopoulos, Northeastern University’s political science chairman, said. “There may be an opening for a compromise in the lame-duck session.”

The most effective gun reform lobbyists are the “gun-toting assailants,” according to pollster David Paleologos, arguing the violence keeps “the issue alive, gives gun owners ‘a bad name,'” and encourages Democrats, Republicans, and independents to be pro-stricter gun laws.

Although Suffolk University’s Political Research Center director would not be surprised if the 2024 Republican presidential primary comprised of candidates “lining up to be in the good graces of the NRA,” Paleologos warned the GOP against the potential repercussions.

Sen. Chris Murphy (D-CT), a vocal gun reform advocate after the 2012 Sandy Hook Elementary School shooting in his state, supports Biden’s push for an assault-style weapons ban since the House has already passed draft legislation, but he is realistic concerning the measure’s chances of clearing the Senate.

“Does it have 60 votes in the Senate right now? Probably not,” Murphy told CNN last weekend. “But let’s see if we can try to get that number as close to 60 as possible.”

Instead, Gov.
Jared Polis
(D-CO) endorsed “a similar process, where you need an additional license or background check for some of the most high-powered weapons.”

“That’s the kind of thing that we should be looking at nationally but not to the exclusion of all these other things that we’re talking about, which can be important as well,” Polis told NBC.

Polis’s position coincides with that of centrist Republicans, such as Rep. Brian Fitzpatrick (R-PA), who told Fox News he backs red-flag laws that preserve due process and protect law-abiding gun owners’ rights while securing community safety.

Biden implored Congress to pass “stricter” gun reform, including an assault-style weapons ban, when asked about the Walmart shooting during a Thanksgiving appearance at the Nantucket Fire Department in Massachusetts. Last week, a Walmart Supercenter night-shift manager opened fire in his Chesapeake, Virginia, break room, killing six and injuring four, before turning his gun on himself. Days earlier, a self-identified nonbinary person shot up the gay nightclub Club Q, killing five and hurting 25.

“Look, the idea that we’re not enforcing red-flag laws, period, just based on knowledge, not on parents saying or a loved one saying you should arrest this person now for his own sake, is ridiculous,” Biden said of Colorado’s current red-flag framework. “That’s number one.”

“Number two, the idea we still allow semi-automatic weapons to be purchased is sick,” he added. “It has no, no social redeeming value. Zero. None. Not a single, solitary rationale for it except profit for the gun manufacturers.”

But Biden and the White House have been coy about an assault-style weapons ban legislative strategy for what became the president’s loudest applause line on the trail, not only for the lame-duck Congress but for when Republicans retake the House.

“I’m going to try,” Biden said in Nantucket. “I’m going to do it whenever I — I got to make that assessment as I get in and start counting the votes.”

Press secretary
Karine Jean-Pierre
cited Biden’s 1994 Assault Weapons Ban, signed into law by former President Bill Clinton almost 30 years ago, as a precedent. That legislation sunsetted 10 years later but was the product of another Democratic-unified Congress after the 1989 Stockon, California, shooting, as well as the 1991 and 1993 shootings at Luby’s Cafeteria in Kileen, Texas, and 101 California St in San Francisco, respectively.

“People didn’t think we would get a bipartisan, even a bipartisan legislation on the … gun reform bill that we were able — the president was able to sign into law just a couple of months ago,” Jean-Pierre said. “We’re going to just continue our efforts, continue having those conversations because we have to keep our community safe.”

The press secretary did not respond directly to questions related to whether Biden would be open to narrower gun policy change, saying only that Democrats had not “laid out our priorities just yet.”

“We’re going to have conversations with Democratic and Republican leadership in both the House and the Senate to talk about what the priorities are going to be for the next couple of weeks,” she said.