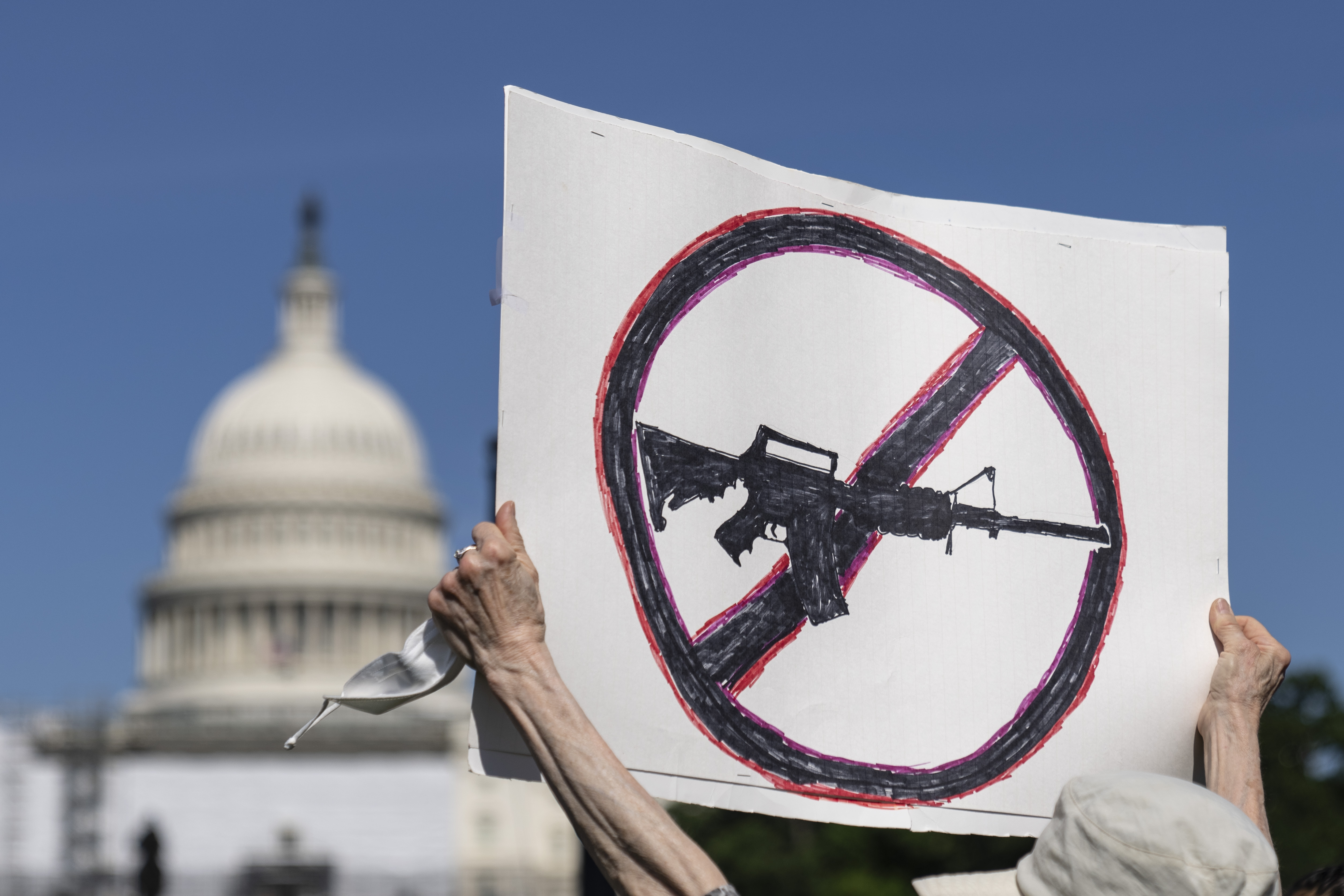 No one who voted for the president’s gun safety bill — Democrat or Republican — appears to be paying a political price. | Drew Angerer/Getty Images

For decades, votes on gun safety bills were seen as being among the riskiest for frontline lawmakers. Back a bill restricting gun access, the assumption went, and look out when you’re up for reelection.

That apparently is no longer the case.

Days away from the midterm elections and just months after President Joe Biden signed the first gun safety bill into law in nearly 30 years, no one who voted for that measure — Democrat or Republican — appears to be paying a political price. Nor are they suffering for the bipartisan confirmation of the first director of the bureau of Alcohol, Tobacco and Firearms since 2013.

If Democrats suffer big losses at polls on Tuesday, it won’t be because of their decision to back the bill or the ATF’s Steve Dettelbach.

That’s a major switch in conventional wisdom that has lasted since the last time legislation limiting gun purchases cleared Congress in 1994. Democrats suffered devastating losses that year, losing control of the House for the first time in four decades. The National Rifle Association at the time claimed credit for the Democrats’ downfall. And though groups pushing for firearms restrictions insisted the two were not correlated, the perception persisted that they were.

“It’s not 1994 anymore,” said Peter Ambler, executive director of the gun safety organization Giffords, founded by former Ariz. Rep. Gabby Giffords, who was shot in 2011. “It’s safe to say that, at this point, we have obliterated the idea that guns is risky political territory for Democrats. Quite the contrary.”

Ambler and other advocates believe there is not a single candidate in danger strictly because of their votes on gun legislation. They noted that there had been no primary losses for Republicans over the issue either.

Groups that opposed many recent firearms restrictions are still leveling attacks. And they still make the case that gun issues are salient in the 2022 elections.

“While anti-gun politicians have repeatedly railed against law enforcement, the average voter is seeing crime on the rise in their own communities and across the nation. So we expect voters to hold anti-gunners accountable at the ballot box,” said Erich Pratt, senior vice president of Gun Owners of America.

But advertisements from the gun lobby make little mention of the legislation that was passed under Biden, formally known as the Bipartisan Safer Communities Act. Instead, those groups are leaning into crime as a campaign issue and attacking Democrats generally as “anti-gun.”

Gun safety groups aren’t calling 2022 a turning point in the movement. They believe, instead, that it’s the culmination of a seismic shift in gun politics that has been underway for years. In 2018, a number of Democrats leaned into gun restrictions in a way they hadn’t before — and they won.

But they say they’ve seen more recognition this year among elected officials that voters, including gun owners, broadly support some safety measures. Leaders in the movement point to a number of reasons behind the change, including firearms policy enacted at the state level and the rising popularity of gun safety measures with suburban voters.

States serve as “the incubator” for this kind of political change, Kris Brown, president of the Brady Campaign, told POLITICO.

In 2018, after a shooter killed 17 people at Marjory Stoneman Douglas High School in Parkland, Fla., gun safety emerged as one of the most salient political issues, she said. There was a push in multiple states to enact so-called red flag laws, designed to keep firearms away from people deemed a threat to themselves or others. Now, 19 states and Washington, D.C., have such laws, including Florida, where the law was put in place under then governor (and currently the head of the GOP’s Senate campaign arm) Sen. Rick Scott.

“We call ourselves 97Percent because that’s the number that favor, in a poll, background checks. Only like 89 percent of people like cheeseburgers. There’s literally nothing more popular,” said Mathew Littman, the group’s executive director. “And so if you’re a legislator, doing the will of your constituents, the odds are you’re going to be a more popular legislator.”

The popularity of these measures matters particularly among suburban voters, Ambler said. He believes GOP lawmakers have taken notice. In addressing the gun legislation he voted for in June, Senate Minority Leader Mitch McConnell said he hoped the law would be viewed “favorably with voters in the suburbs that we need to regain in order to hopefully be in the majority next year.” The Kentucky Republican specifically mentioned the legislation’s investment in school safety and mental health as a “sensible solution” for regaining ground in those districts.

“Republicans recognize that Democrats have been able to make significant headway in suburban districts and among suburban voters by emphasizing the issue, which resonates sort of across the political spectrum,” Ambler said. “And that’s because it’s so personal to voters.”

Gun safety groups also attribute this progress to, what they see as, the waning power of the NRA amid financial and legal troubles, along with their own ballooning political capital. They’ve taken special care to frame gun policy legislation around gun safety and responsibility, instead of taking away firearms and rights, Ambler said.

Dudley Brown, president of the National Association for Gun Rights, was a gun lobbyist in 1994, when a just-passed assault weapons ban proved to be a valuable campaign cudgel in helping Republicans win back the House after decades out of power. He conceded that 2022 was different, but said it was a matter of the timing of the legislation.

“Had this happened a year prior to the election, there would’ve been a lot of Republicans to face the music,” he said.

Brown also said there are more issues at play this cycle, making it less obvious how gun politics are factoring into the election. Brown pointed to Alaska’s Senate race as one example of where the issue remains key to voters. His group continues to hit Sen. Lisa Murkowski on guns in advertisements, including for her vote for the Bipartisan Safer Communities Act. Murkowski was one of 15 Senate Republicans to join all Democrats in passing the legislation.

The NRA, for its part, said the Bipartisan Safer Communities Act as with “every Second Amendment vote” was taken into consideration when deciding which candidates it would endorse during the primaries. But spokesperson Amy Hunter also said the “national dialogue around guns is changing,” noting that the main victories the group has seen is through the courts and in confirmation battles.

“In the last year alone, the NRA secured the most significant pro-Second Amendment Supreme Court ruling in more than a decade, enabling carrying a firearm outside the home a reality for millions. The NRA has led the way for constitutional carry in 25 states — so far. The NRA defeated the gun control group’s handpicked nominee to head the ATF,” Hunter said. “Polling this election clearly shows that pro-gun candidates across the country are trusted more when it comes dealing with rampant crime and protecting self-defense.”

Still, the gun lobby’s midterms campaign hasn’t translated into Democrats shying away from the issue. Gun safety groups note how Biden continually highlights passage of the summer legislation and whenever possible makes clear his intent to try and ban assault weapons again.

White House spokesperson Olivia Dalton, “without commenting on electoral politics,” said that “too many Americans have lost loved ones, or have had their lives forever changed due to gun violence. Guns are the leading cause of death for children in America.”

The president believes more needs to be done, Dalton said, adding that Biden will continue to push for passage of an assault weapons ban.

“He’s doing it because he knows what we know, which is that the polls say this is a really good issue,” said John Feinblatt, president of Everytown for Gun Safety. “And the fact is, nobody’s losing their job because of their vote for gun safety in the Senate.”