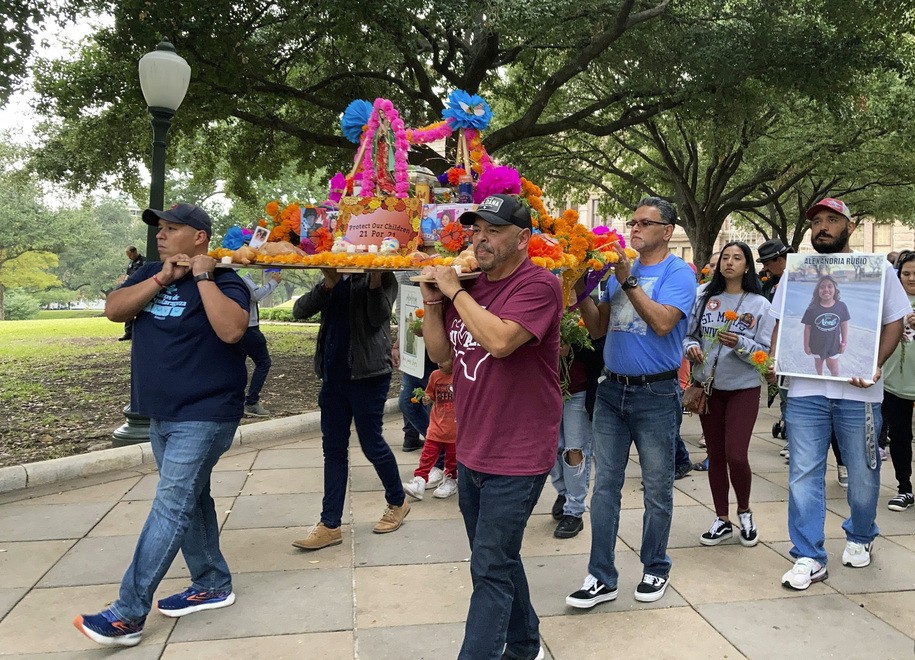 Courthouse News Service reported that Texans held similar vigils in other cities across the state to continue calling on Abbott and state lawmakers to act for their children, and champion passage of meaningful gun violence reform. Dora Mendoza told the outlet that she’s made the three-hour long drive from Uvalde to the capitol numerous times already in memory of her 10-year-old granddaughter, Amerie Jo Garza. She did it once again on Día de Muertos, which is celebrated on Nov. 1 and 2.

But despite Uvalde representing one of the deadliest school mass shootings in U.S. history, and the deadliest in Texas state history, Abbott is more beholden to the NRA, refusing to even raise the minimum age required to buy a mass killing machine. Abbott has claimed any such effort would be unconstitutional. This is a rich claim coming from the governor of a state whose very corrupt attorney general has evaded trial on fraud charges for years, and believes he has the power to terrorize trans children and their families.

But Abbott made his priorities perfectly clear when he spent hours at a fundraiser after the shooting that stole the lives of 19 students and two teachers. Chilling 911 calls released this week revealed that desperate children called for help even when they knew it was unsafe to do so. “The child was silent as the dispatcher asked their name and what room they were in,” The Texas Tribune reported.

“Mendoza said that it felt like an insult for the governor not to take action, especially since shootings similar to the one in Uvalde have continued to happen across the nation,” Courthouse News Service continued. “I’m not sure where this country went astray as far as gun rights and those being more important than children, but that has got to stop,” Vincent Salazar said in the report. He lost his 11-year-old daughter Layla Marie Salazar. “Some of us have spoken to the governor directly and he says he will not honor our request to raise the age to buy an AR-15,” 17-year-old Jazmin Cazares said at the vigil. “He believed he can ignore us after failing Sutherland Springs, Santa Fe, El Paso, Odessa and now Uvalde. Greg Abbott will continue to fail us.”

“’We Should be choosing her Halloween costume together but instead I’m making her an ofrenda,’ tweeted Ana Rodriguez, the mother of Maite Rodriguez, 10, who dreamed of becoming a marine biologist and cared about the environment,” NBC News reported.

”A strong majority of Latinos are concerned about their personal safety from gun violence and believe weak gun laws are a major reason why perpetrators are capable of inflicting such carnage,” Voto Latino said in releasing polling results this past summer. Fear is palpable in the survey results, as 69% say they worry “a lot” or “some” about their safety in public places. 86% of Latino respondents felt that mass shootings are “either a crisis or major issue,” and support background checks on all guns, banning the sale of high-capacity magazines, and banning the sale of assault weapons.

Abortion rights, climate change, and gun safety are all on the ballot this fall, and there are literally thousands of ways to get involved in turning our voters. Plug into a federal, state, or local campaign from our GOTV feed at Mobilize and help Democrats and progressives win in November.

‘My daughter’s gone. I have to fix it for others’: Mom of Uvalde shooting victim Lexi Rubio