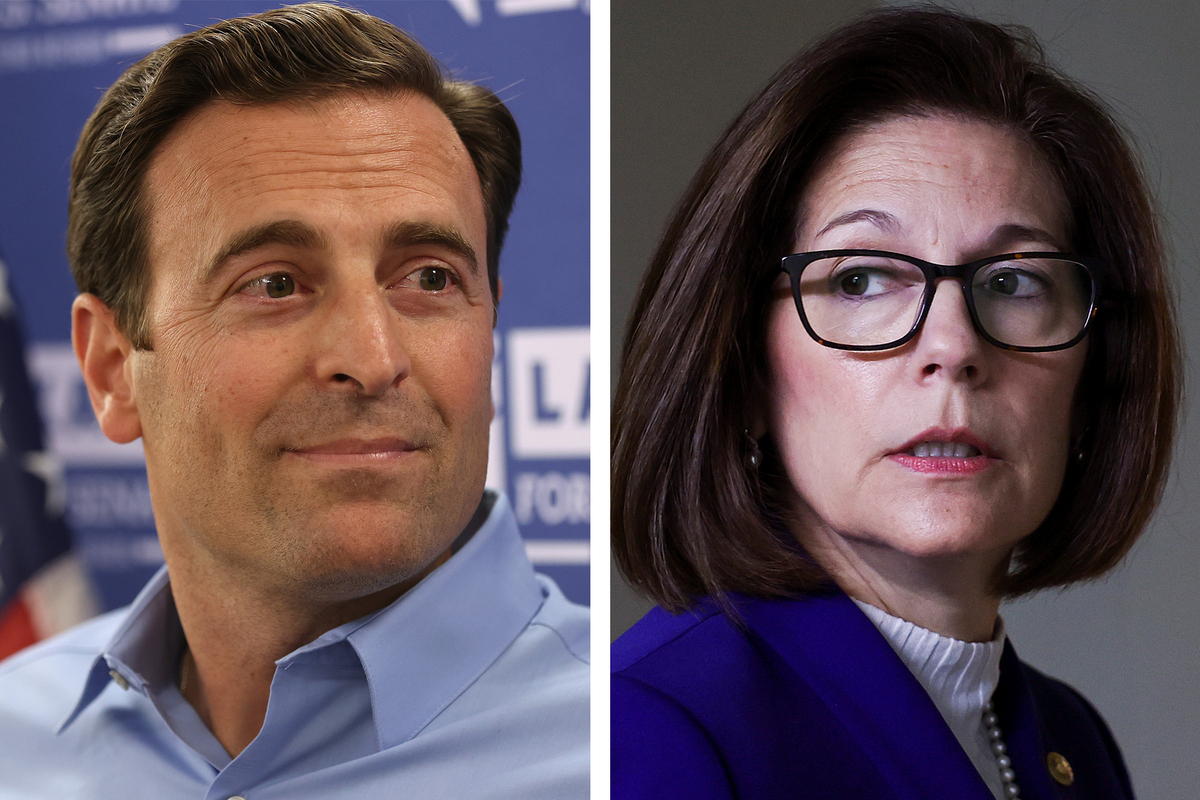 RENO, Nev. — The sun was a dim red spot when Nathan Noble returned for the fall semester at the University of Nevada.

Smoke from California wildfires blanketed the region. Classes were canceled. Students received warnings on their phones telling them to stay inside, in what has become an unwelcome autumn tradition.

“Since Nevada is a pretty fast-warming state, climate change is on everyone’s mind here, especially with the smoke we’ve been having,” Noble said. “We literally breathe it.”

Reno, located in western Nevada near the mountainous border with California, is the fastest-warming city in the country. It’s also the heart of Washoe County, a politically purple region in a battleground state that will play an outsize role in deciding which party controls the Senate. The race between Democratic Sen. Catherine Cortez Masto and her Republican challenger, Adam Laxalt, a former state attorney general, is locked in a dead heat, according to polls.

Republicans see Nevada as their best chance to flip a Democrat-held seat, and they are hitting Cortez Masto with ads that accuse her of being soft on crime and that connect her to an unpopular president and rising inflation. Like those of Republicans elsewhere, Laxalt’s energy policy proposals are centered around boosting oil production to cut high gasoline prices. He doesn’t address greenhouse gases or their contribution to rising temperatures.

Democrats are hoping that their concerns about climate change, as well as the Supreme Court’s decision to roll back abortion rights, could drive voters to the polls on Tuesday.

Young people like Noble, 20, could help decide the election. In the race two years ago, 71 percent of eligible students at the university’s Reno campus cast ballots, according to The Nevada Independent. More broadly, about 30 percent of the state’s electorate is under 35 years of age.

“Even younger Republicans will acknowledge that climate is an issue that needs to be solved, even if climate change isn’t necessarily the phrase they use,” she said. “Because we’re a generation that has been told our entire lives that our planet is dying, this is just something that is drilled in our heads.”

The Nevada Senate race will be one the closest in the country and, along with races in Pennsylvania and Georgia, will likely determine if Republicans take control of the chamber. Current polling analyzed by FiveThirtyEight shows that the Nevada candidates are locked in a virtual tie six days before the election.

Cortez Masto leads by double digits in Clark County, the Democratic stronghold that includes Las Vegas. Laxalt’s path to victory is to turn out more voters in rural Nevada and then win Washoe County.

It’s here where the race will likely be won or lost. Washoe County accounts for about 15 percent of the state’s rural population.

President Joe Biden won the state by just 33,596 votes in 2020, largely on the strength of urban voters in Reno and Las Vegas. Biden won Washoe County with 50.8 percent of the vote.

More than almost any other city, Reno’s fate is intertwined with climate politics in Washington. It’s the fastest-warming city in the United States, and is 10.9 degrees Fahrenheit warmer than it was in 1970, according to a July report from Climate Central. (Las Vegas places second, with 5.6 degrees of warming.)

It’s also on the edge of the clean energy revolution. Just 20 minutes up I-80, in Sparks, is the Tesla Gigafactory where electric vehicle motors and battery storage packs are being built. On a recent day, wild horses roamed the valley around the plant.

To report this story, E&E News spent three days on the ground in Nevada and talked to more than three dozen voters, as well as campaign advisers, party officials, political consultants, union members and environmental groups.

Neither campaign made its candidate available for an interview.

Getting out the vote

To win Nevada’s election, nothing is more important than bringing the issues to voters’ doorsteps. And the Culinary Workers Union has owned the ground game.

The union, which is working on behalf of Cortez Masto and other Democrats in this election, has 60,000 members who tend to work in hotels and casinos. More than half of them are Latino.

Canvassers are on track to knock on 1 million doors in Reno and Las Vegas, almost three times as many as in the 2018 midterms. The group expects to reach more than half of the state’s Latino and Black populations.

The canvassers use their experiences with record heat and wildfire smoke to connect with voters. Sometimes they talk about falling water levels in Lake Mead, the primary water source for Las Vegas, and how they could damage the region’s economy. Worsening water shortages could curtail the tourism that provides their jobs.

“The economy is No. 1, there is no question about that,” Pappageorge said. But the union is telling voters that Democrats’ climate plans are important because they are intertwined with the economic challenges that Nevada faces.

On a sunny Saturday in October, union canvassers led by Dajenaba Blackwell and Farook Hossain targeted low-propensity voters. Their first stop made the group optimistic.

Gerald Brisbin, 71, a retired police officer, said he was angry with Republicans and planned to vote for Democrats.

One of the reasons, he said, was that Republican lawmakers keep denying the reality of the climate change.

“I haven’t seen snow since 2014, and it’s ridiculous,” he said. “The weather is getting hotter, water is marginal, and the damn GOP thinks it’s the weather and it will change.”

But after a few hours on the streets of Sparks, a suburb of Reno, the region’s embittered politics were hard to miss.

Irene Harris answered her door with a worried look. She told the canvassers that she was voting Democratic, but cautioned them against knocking on her neighbors’ doors.

“I hope nobody points a gun at you,” she said.

One of her neighbors, who refused to give his name, told a reporter he wasn’t worried about rising temperatures, and cited the Biblical story of flooding and Noah’s ark as proof that weather extremes are a part of life.

“Climate temperatures keep going around,” he said. “Alaska was the tropics at one point.”

Down the road, the group knocked on another door. Nobody answered. Then someone noticed a flag for the Three Percenters right-wing militia in the window. They didn’t knock again.

At another house, someone opened the door a crack and told the group to move on. Above him was a sign with a picture of an AR-15 semiautomatic rifle that read: “We Don’t Call 911.”

There was also evidence of what Democrats fear most: that a big part of their base could stay home on Election Day.

Gabriella Mitchell, 30, was browsing through rows of vinyl at Recycled Records. She said she was considering not voting next week because Democrats promised a massive reduction in student loan debt. When Biden delivered a program that would forgive $10,000 for most students, it was below her expectations.

If she votes, she said, it would be for Cortez Masto because of her stance on abortion rights, an issue for her that highlights how politics seems to be “old white males deciding on behalf of white males.”

Shannon Kelly, a 27-year-old environmental engineer, said he was battling his personal frustration with a Democratic Party dominated by politicians in their 60s or older. He said they don’t place enough urgency on issues that motivate younger voters, such as concerns about having children on a warming planet.

He said he often feels like his vote doesn’t matter. But this year is different because of the Supreme Court’s decision to rescind abortion rights.

“That makes me want to vote because that is a precedent of other things they want to put in motion,” Kelly said.

Latino voters are a potent force in Nevada, and are expected to constitute about 20 percent of the midterm electorate. They are more likely than other voting groups to be concerned about climate change, polling has consistently shown.

At a number of homes where Spanish-speakers answered the doors, many said they would not be voting. The reasons ranged from no interest in politics to busy work schedules to frustration with Democrats.

Not so for Sonia Lopez, 52, who was walking her dog after lunch. She was enthusiastic about Cortez Masto because “she helps Hispanic people.” She also said climate change was a top concern for her because she worries about how it will affect her son.

“Things are changing a lot,” she said. “If we keep our environment clean, maybe we can do better for our sons and grandsons.”

In an upscale Northwest Reno neighborhood, which one political constituent called the land of NRA dads and Planned Parenthood moms, a couple were eating hamburgers in the shade near the Raley’s supermarket. They represent the type of suburban moderates both parties are hoping to lock down.

Dawn Heins, 53, is a Republican who voted for former President Donald Trump twice and said she was open to supporting Democrats in this cycle. As the owner of a tutoring business, she said she’s too busy to pay attention to every political twist and turn out of Washington, and was just now tuning into the race. She was bothered by abortion rights being stripped from women, and was also concerned about the environment. For her, that means less real estate development, particularly as drought conditions rise, and expanding clean energy jobs, especially solar.

“We essentially live in or near a national forest,” she said. “This is a very outdoorsy population, so environmental concerns are very high.”

Her husband, Jon Heins, 54, a real estate agent who voted for Trump in 2016 and then Biden in 2020, said he had not made up his mind about whom he’ll vote for. But after the brutal heat of recent summers, environment will be one of his top concerns.