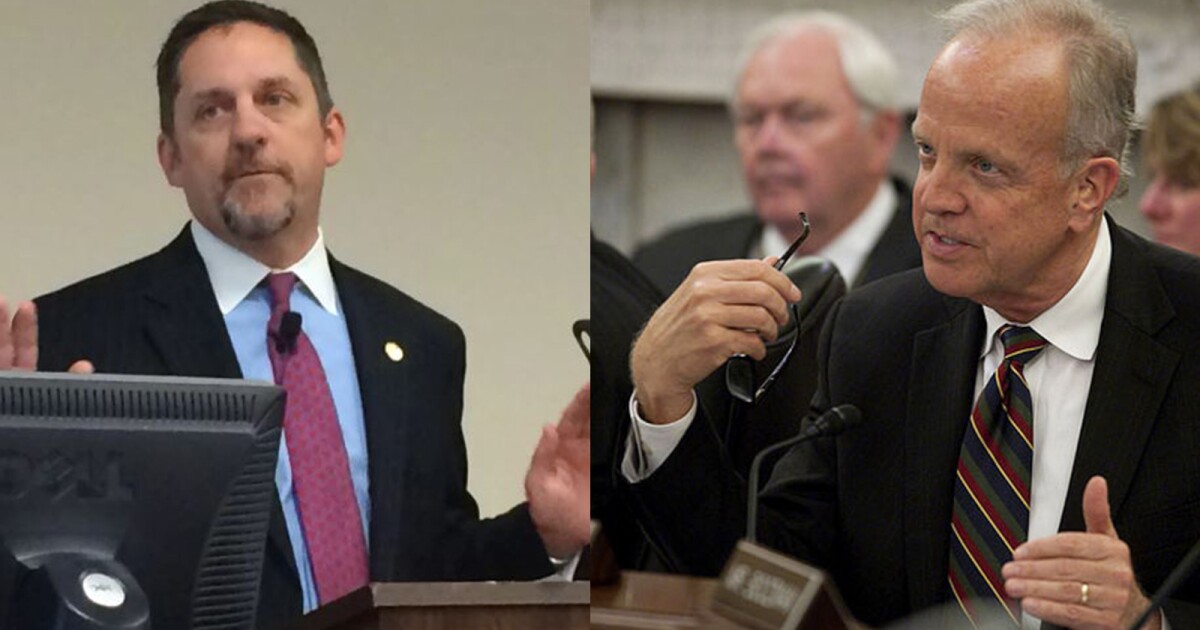 Anything other than U.S. Senator Jerry Moran winning reelection to a third term would count as a shocker. After all, he’s a Republican incumbent in Kansas, which hasn’t elected a Democrat to the Senate for 90 years.

But Democratic challenger Mark Holland, a Methodist pastor and the former mayor of the Unified Government of Wyandotte County, insists he sees a path to victory. He argues Moran has drifted to the extreme right wing of his party and has fallen out of touch with moderate Republicans, Democrats and independents.

Holland, 53, saw hope for his chances in the Aug. 2 primary vote where Kansans overwhelmingly opposed an anti-abortion amendment that Moran had supported. Holland is trying to campaign in all 105 Kansas counties, saying Democrats for too long have neglected rural voters and that his message can appeal to them too.

Moran, 68, has been a fixture in Kansas politics since 1989. He served in the Kansas Senate for eight years, then in the U.S. House from 1997 to 2011, and now two U.S. Senate terms. While Moran has declined to debate Holland or to be interviewed on KCUR, he says he has conducted countless town halls and has a deep connection to Kansas voters and their conservative values: favoring low taxes, curbing illegal immigration and supporting farmers.

Moran is known in the Senate for his work on behalf of veterans (although he is not a veteran) and for his staff’s diligent approach to constituent services. He has pushed for the cleanup of the Sunflower Ammunition Plant in Johnson County. Gov. Laura Kelly, a Democrat, cited his help in luring the $4 billion Panasonic electric vehicle battery plant to that property.

Holland led churches in Wathena and Elwood, in northeast Kansas, and then was pastor of Trinity Community Church in Kansas City, Kansas, from 1999 to 2018. He co-founded Mainstream UMC, which advocates for LGBTQ+ inclusion in the Methodist church.

Holland served six years as a Unified Government commissioner, then one term as mayor, from 2013 to 2017. He touts his leadership in helping to bring $2.8 billion in economic development investment and 12,000 new jobs to Wyandotte County. But he lost reelection after he took on the influential firefighters’ union and challenged the fire department’s spending, including paying firefighters for shifts they didn’t work.Holland said Washington, D.C., can learn from mayors how to actually get things done in government and says he will bring that capability to a broken political system.

David Graham, of Overland Park, is the Libertarian candidate:

The race between Moran and Holland is a true study in contrasting political philosophies and values. Here is where the candidates stand on key issues:

Moran’s PAC contributed $50,000 to the Value Them Both anti-abortion amendment that Kansas voters rejected in August. He is staunchly anti-abortion. He says the August vote showed states should decide the abortion issue.

“Clearly, Kansans are speaking,” Moran told the Kansas Reflector. “My view is they ought to be listened to.” Moran also said there’s no chance a national abortion ban can pass the Senate “at this point in time and not in the foreseeable future.”

Holland says he would be a vote in Congress to codify Roe v. Wade and abortion rights nationally.

“We protected women’s rights and reproductive rights in Kansas in August, and on Nov. 8 we’re going to do that for the whole nation,” he told KCUR.

Holland says the National Rifle Association is “the Big Tobacco of our generation,” more interested in profits than lives. He says that Congress needs to consider an assault weapons ban, but that it should first adopt other sensible gun regulations, including requiring thorough background checks and training, and closing purchasing loopholes.

Moran says he is a strong Second Amendment proponent. He has the NRA’s backing. In June, he voted against the bipartisan gun safety legislation that passed, saying the country needs to address the root causes of violent crime rather than creating new laws that hinder gun owners’ rights.

Moran contends inflation is among his constituents’ greatest concerns and says that’s where the Biden administration has failed. He voted against the Inflation Reduction Act in August 2022, saying he opposed raising taxes, hiring more IRS agents and other provisions in the law. He advocates cutting federal spending, expanding energy production, and focusing on pro-growth policies to reduce the cost of gas, goods and services.

Holland said he supports the Biden administration’s efforts to deal with inflation. He argued the Inflation Reduction Act will in fact help struggling families by allowing Medicare to negotiate prescription drug prices and by keeping Affordable Care Act premiums reasonable. Holland said the Senate should take other proactive steps such as assembling a panel to explore why oil companies are experiencing record profits.

Holland said he would have supported the bipartisan infrastructure bill that Congress passed in November 2021. He contends it will be a major boon for Kansas, by creating jobs, investing several billion dollars in economic development and transportation projects, and by bringing broadband to rural areas.

Moran was initially part of a bipartisan group of Senators that negotiated on the infrastructure bill, but he voted against it. (U.S. Sen. Roy Blunt of Missouri voted for the bill but Moran joined U.S. Sens. Josh Hawley of Missouri and Roger Marshall of Kansas in voting against it.) Moran explained in a statement that his top priority for the infrastructure bill was that it had to be paid for, and he couldn’t support the final bill because it added too much to the national debt.

Holland argues that Moran refused to investigate the Jan. 6 insurgency at the U.S. Capitol and refused to hold Donald Trump accountable for his attempt to overturn the 2020 election of Joe Biden.

“If you don’t have the courage to stand up for democracy after Jan. 6, you’ve abdicated your right to serve in the U.S. Senate,” Holland said on KCUR.

Moran was the only Republican in the Kansas congressional delegation to vote to certify Biden’s election as president. “To vote to reject these state-certified electoral votes would be to act outside the bounds of the Constitution, which I will not do,” Moran said on Jan. 5, 2021.

Moran condemned the Jan. 6, 2021, attack on the U.S. Capitol and said Trump was “wrong to continue to spread allegations of widespread fraud and not immediately discourage the reprehensible and unpatriotic behavior.” But Moran voted against impeaching Trump in February 2021, saying the Senate did not have jurisdiction to convict a former president.

Moran received Trump’s endorsement just 12 days after that vote to acquit. Still, according to the Topeka Capital-Journal, Moran voted with Trump only 61% of the time between 2019 and 2021 and is less of a brash Trump ally than his Senate colleague Marshall.

The Kansas News Service is a collaboration of KCUR, Kansas Public Radio, KMUW and High Plains Public Radio focused on health, the social determinants of health and their connection to public policy.

Kansas News Service stories and photos may be republished by news media at no cost with proper attribution.