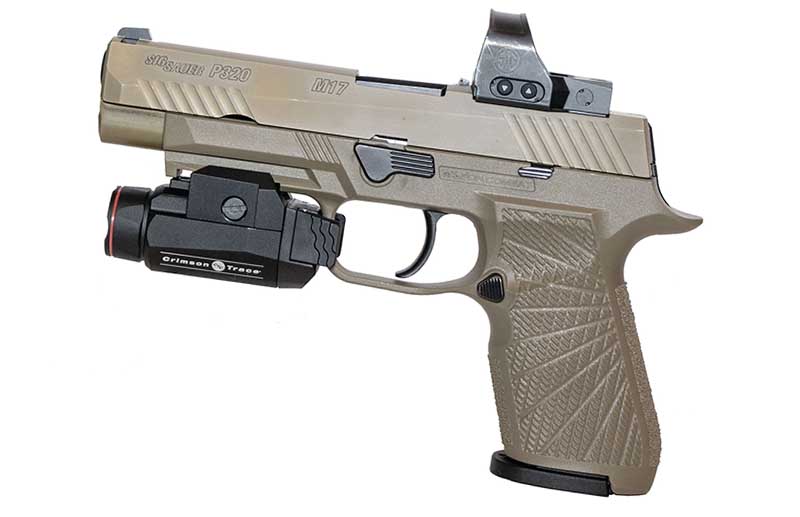 A review of the completely customizable Sig Sauer P320 along with some upgrades from Wilson Combat.

I’m not a fan of hammerless handguns, and I’m not a plastic pistol guy. I’m not suggesting plastic pistols are junk or that you shouldn’t own or like them; they’re just not for me. However, I’m a red-blooded American, meaning that I, as many other patriots do, like to have the same handgun our military trusts. I grew up with a 1911, and it was my standard issue as an M1 tank commander. I also won the West Virginia National Guard Pistol Match with a Beretta. So, in 2017, when the United States Army adopted the Sig Sauer P320 as their new handgun, well, I had to have one. Ironically, I was in the Sig Sauer booth at SHOT Show when the news was announced.

When my P320 showed up, I dutifully took it to the range and shot it quite a bit. I was impressed by the trigger, the way the gun fit my hand and how well I was able to shoot it. However, I cleaned it, boxed it, put it in the safe and continued to carry one of my Browning Hi Powers or my Wilson Combat EDC X9. Sure, on occasion, I’ll pull the P320 out for some range time or to work with it for an article, but beyond that it was a safe queen.

Last year, Wilson Combat introduced a fully customized Sig Sauer P320. After receiving the pistol, the first thing I did was call Bill Wilson—Wilson Combat’s founder—and ask him why Wilson Combat, which was founded on the steel-framed 1911, decided to offer a custom P320. Bill’s response was, “Let’s face it, like the 1911 and the M9 [Beretta] being adopted by the military, the P320 is here to stay for a while. Also, we immediately saw ways we could improve on the basic gun.”

And improve on the gun they did. The pistol worked, fit my hand well, had an excellent trigger, was controllable, easy to reload, reliable, and most importantly, I shot it well—better than I did the factory stock version. Almost reluctantly, I had to admit I liked it. This was due in no small part to the Wilson Combat grip module, which is a large portion of the customization. Wilson combat offers 14 different aftermarket grip modules for the P320 in various configurations and in either black or tan. They all retail for $64.95.

What makes these grip modules so special? The grip size is minutely larger than the Sig Sauer “small” module, but they feature a higher and deeper cut at the tang. They also have deeply dished cuts for the thumb on the sides near the magazine release, and a deeper undercut at the trigger guard. The sides of the grip feature the Wilson Combat starburst pattern, and the front strap and backstrap have a sandpaper-like texture. The magazine well also has a generous bevel, an accessory rail is standard and steel rods can even be added to the module to increase weight.

I felt the Wilson Combat grip module was more comfortable and stuck to my hand better. At the same time I was working with this pistol, I was also helping Benghazi hero David “Boon” Benton train some local patrol and SWAT officers. Benton, a man with serious combat handgun experience that matters, told me he’s been using a Wilson Combat P320 grip module since it was introduced. He said, “That Wilson Combat frame makes [the P320] feel more 1911-ish, it points better for me as well, so I get a better natural point of aim … and it helps me get higher underneath the trigger guard.”

I mention all this so that you understand how my relationship with the Sig Sauer P320 went from an obligatory patriotic admiration to more of an awakened appreciation of the platform’s versatility. I say platform, because that’s what the P320 really is. I know the gun’s modularity has been hashed out in these and others, but I’m not convinced the average shooter truly realizes what’s possible with it. Though it’s my job to know these things and share them with other shooters, I believe I’ve somewhat ignored this aspect of the P320 as well. I must thank Wilson Combat for helping me get my shit together as far as the P320 is concerned.

So, just so you understand the particulars of this pistol—platform—let’s start with the actual portion of the pistol that’s considered a firearm. It’s not the grip frame, slide or barrel. The serialized portion of the Sig Sauer P320 is what is called the fire control unit. This is a metal assembly of parts that include a frame, slide catch, disconnector trigger bar, trigger, sear and springs. It’s also where you’ll find the serial number.

Essentially, you can get it any way you like it.

The next step is to fully remove the takedown lever. To do this, you pull on it and continue to rotate. The fire control unit can now be removed by lifting up and pulling forward on the two slide rails at the front. This will extract the T-shaped flange at the rear of the fire control unit from the tang of the grip module. Once completed, you can then begin to reconfigure the platform in whatever version makes you the happiest.

As an example, my M17 P320, which is the civilian version of the military’s pistol, has a 4.7-inch barrel and an ambidextrous manual thumb safety. Being a 1911/Hi Power guy, I really like the thumb safety, but the 4.7 barrel and slide makes for a big pistol that’s a bit difficult to conceal. I also much prefer the Wilson Combat compact grip module.

I inserted the M17’s fire control unit into a Wilson Combat compact grip module. Then, I took a slide and 3.9-inch barrel from a P320 RXP Compact, which comes out of the box with a Sig Sauer Romeo1 reflex sight and high-profile three-dot night sights that can be co-witnessed and installed them on the Wilson Compact grip module.

This accomplished two things that were very important to me. First, the original P320 RXP Compact didn’t have a manual thumb safety. The M17 fire control unit fixed that. Second, the conversion essentially turned my full-size M17 into a more compact, easier to carry and conceal, handgun.

But just like on those late-night infomercials, there’s more.

I still have two pistols, but one is configured for concealed carry and the other for home defense. Both have the same size grip module, both have reflex sights and both feel identical in my hand. The home-defense version is longer and heavier and doesn’t have the manual safety.

There’s one important point that needs to be discussed. In 2016, it was discovered that the P320 could possibly fire if dropped. Sig didn’t issue a recall but did offer a voluntary upgrade. Due to this upgrade, there are two variations of the fire control unit. If your P320 has a thick trigger, it’s the pre-upgrade version. If it has a thin trigger, it’s the post-upgrade version.

The point of all of this is that the Sig Sauer P320 is much more than just a pistol. It’s a highly modular handgun system that has almost endless possibilities. I’m strongly drawn to the potentials of this platform, much in the same way I appreciate the AR-15’s modularity. I wouldn’t say I’ve become a striker-fired/plastic pistol guy, but I’ll say that you shouldn’t be surprised if you see a Sig Sauer P320—in some form or another—on my side.

Like me, maybe you should give the P320 another—keener—look.