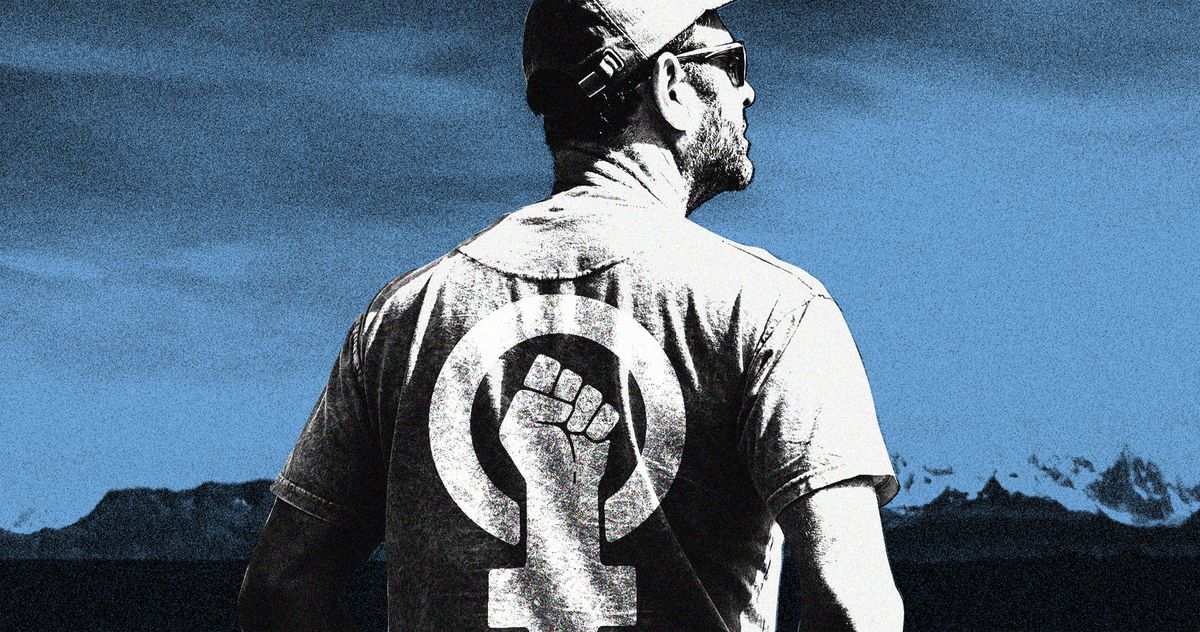 John barely slept in the days after the Supreme Court overturned Roe v. Wade this summer. When he first saw the news, he immediately thought of his daughter, who had just turned 8, and how he’d do anything to protect her. He had admittedly not been thinking about abortion rights when he donned a MAGA hat at rallies to support Trump’s tough-on-crime agenda back in 2020. Why would he be? Though John was personally against ending a pregnancy, he felt strongly that everyone should have a choice. At the time, that choice was federally protected.

For most of his life, John, who asked to go by his first name only, has leaned right. The 38-year-old was adopted from Colombia and spent nine years in the U.S. military, steeped in pro-gun values, patriotism, and hard work. Though John was sick of war after returning from Iraq in 2007, he has almost always voted for Republicans in Minnesota, where he lives, and on federal ballots. Now he feels betrayed by a country that sent him to fight for democracy abroad while gutting basic rights at home. There is no way he can look his daughter in the eye and say, “I’m going to vote for the government to tell you what to do if you get raped” and become pregnant. He isn’t alone. Over the summer, at swim and soccer practices, John stood around with other conservative fathers, talking through their feelings of guilt, remorse, and anger toward a party that wants to control their children’s bodies. “There are so many dads pissed off” at the Republicans, he says. “The dads are coming to vote them out.”

John’s words, if true, should cause any GOP campaign strategist to break out in hives. Men have always been the strongest pillar of the Republican Party, and more than 60 percent of them have kids. Fox News polling showed that between May and August, months consumed by fallout over the Dobbs v. Jackson decision, there was a 28-point shift in the number of fathers with children under 18 who said they’d vote for a Democratic candidate (a September poll did not include data for parents). That swing is significant compared to men in general, who moved only four points left, and larger than any other demographic, such as suburban women or gun owners. The replies to one tweet about the poll asking “Dads, what changed?” are flooded with comments like “I have a daughter” or “Won’t be having my daughter grow up in Gilead.” Men who never thought about reproductive rights at the ballot box told me it has suddenly become their top priority, displacing issues like gun rights, tax breaks, and immigration. For some who were already drifting away from a party that’s embraced conspiracy theories and extremism, the overturn of Roe was their final breaking point. Others, like John, are now refusing to support any anti-abortion Republicans in upcoming elections, whose views they might have ignored if the stakes weren’t suddenly so personal.

Voters on both ends of the political spectrum took Roe for granted, including the Democratic Party itself, which has repeatedly failed to push back against anti-abortion narratives, let alone say the A-word out loud. Most of the guys I spoke with described themselves as pro-choice but confessed they had never stopped to consider how, over time, a vote for the GOP was a vote to dismantle abortion rights. Even with Roe in place, Republicans have always found ways to hamstring abortion clinics with policies that made it most difficult for vulnerable people, those who might not have had supportive fathers with resources, to access care. Now, the kind of protective dads who never thought their young daughters would be stripped of the option to end a pregnancy are forced to imagine the worst-case scenarios. They thought about how the women in their lives who had been sexually assaulted, had ectopic pregnancy scares or abortions, might now be affected — classic girl-dad, wife-guy feminism. While incredibly shortsighted, it’s basic human instinct to let emotions guide political beliefs. Research also shows that having a daughter is a man’s best gateway drug to liberalism. Yet Republicans seem to have underestimated how many fathers would flock to Democrats once they felt an immediate threat to their families. “They burn it in our heads that we have to carry firearms to protect our family,” John says, “and then when an extreme scenario happens to our daughters or wife,” they say, “Tough luck.”

Steven Ling used to fit the typical GOP voter mold. The 55-year-old, who has “always been something of a gun person,” joined the NRA when he was younger, worked as a police officer, and is now a financial manager. He’s backed Republicans “more often than not,” but his disgust with Trumpism has been pushing him away from the GOP in recent years — Ling says that paired with the Dobbs opinion, “that party’s dead” to him, and he now plans to vote blue. When he talks about the 10-year-old rape victim who had to leave Ohio, where Ling also lives, to get an abortion, his words spill out quick and loud: “Who the hell has the right to tell her she’s gonna have a baby at 10?” he says. “‘Well, it’s God’s will.’ Fuck this.” After hearing the story a few months ago, Ling thought about his own family. He’d sooner give up his firearms that Republicans have promised to protect than do anything that could harm his 30-year-old stepdaughter and 3-year-old granddaughter. “Am I going to hand my grandkids my gun collection but they have no other rights?” he says. “You can’t wave this shiny toy in front of me and think I’ll be okay watching the country burn to the ground.”

Am I going to hand my grandkids my gun collection but they have no other rights?

Not every dad I spoke with had always supported the right to choose. Caleb Hannon grew up going to Catholic and Baptist churches that taught him gay marriage was a sin and that “even if a woman was raped,” the child was a blessing from God. “I didn’t think about it,” says the 31-year-old, who co-owns a vacation rental company. “I was like, ‘Hey, I’m pro-life.’” He voted for Trump in 2016 and had little interest in reproductive rights until he married a Democrat, with whom he’s now raising a 16-year-old stepdaughter and an almost-3-year-old son in North Carolina. When his wife was pregnant, Hannon worried about what they’d do if her health went sideways. Then, last year, a close friend ended her pregnancy and he found himself disgusted by the six-week ban that passed in Texas, which offers citizens a bounty to police illegal abortions. Still, he didn’t believe a leaked draft of the Dobbs decision was real. It took Roe being officially overturned for his shifting views to click. Though still deeply Christian, Hannon is now pro-choice and can no longer support a party willing to put his daughters in danger. “It was very much a tipping point,” he says. “I would say that I’m definitely, 100 percent on the Democratic side and will be changing my party affiliation.”

Of course, one poll showing fathers moving toward the Democrats does not mean every right-leaning dad is now posting “Dark Brandon” memes. Plenty are celebrating the death of Roe, and some experts predict Republicans will take control of Congress in November given the raft of economic issues that plague the United States and President Joe Biden’s low approval ratings. But there’s no doubt that Dobbs is influencing midterm campaigns: Candidates are scrambling to bury their more hardline anti-abortion stances, a surge of women are signing up to vote, and Democrats have unexpectedly won a series of special elections.

The enraged fathers I spoke with are now laser-focused on what they can help control: the races in their state. Chris Pauley hopes a deluge of dads spurs a blue wave in the Pennsylvania midterms. Up until this year, the 47-year-old was a lifelong Republican who threw his support behind “middle of the road” politicians like John McCain and Mitt Romney. He used to care most about issues like a strong military and a secure border and never thought Roe was in question. Pauley lives in a swing state that plays a big role in determining which party will control Congress, and any other year, he’d likely be eyeing GOP candidates who were more moderate than Trump. But the restaurant manager can no longer support anti-abortion politicians like Doug Mastriano, who is running for governor, or Dr. Mehmet Oz, who is vying for the U.S. Senate. Pauley calls the Supreme Court decision a “huge miscalculation” that will push centrist GOP lifers like himself away from the Republican Party.

And it’s not just dyed-in-the-wool conservative fathers who are changing their vote. I spoke with a 29-year-old Libertarian who values the right to choose more than he despises the Democrats, a party he “completely disagrees with” on most things except for social-justice issues. Josiah Irwin votes in Oklahoma, which effectively banned all abortions a month before Roe was even overturned. Above all, the marine cares about individual freedom. Since Irwin’s own party has recently become anti-abortion, the Supreme Court’s decision has pushed him to support Democrats in the midterms. The right to an abortion is “a liberty that has existed in our country for the past 50 years, and we’re going to get rid of it randomly?” he says. “I’d rather be in a shitty free country [than] in a country that is not free.”

While Irwin feels no personal culpability in the demise of Roe — “Everyone blames you for their candidate losing,” he says of voting Libertarian — some of the dads I spoke with were contrite. John, the army vet, says he blindly helped the GOP execute a long-term strategy. “This 100 percent falls on people like me,” he says, “who vote without realizing the full consequences.” Ling feels “guilty” that it took such an extreme development for him to prioritize abortion as an issue.

For his part, Hannon doesn’t dwell on the bad feelings tied to his Republican past. He’s focused on trying to make sure that the party doesn’t win a supermajority in the North Carolina legislature this November, which would allow it to pass a total abortion ban and override the Democratic governor’s veto power. He’s also ready to embrace a label that might have made his former self wince. “I could align with the idea that I’m a woke dad,” Hannon said. “If someone said that to me, I’d probably take it as a compliment.”

Get the Cut newsletter delivered daily

By submitting your email, you agree to our Terms and Privacy Notice and to receive email correspondence from us.