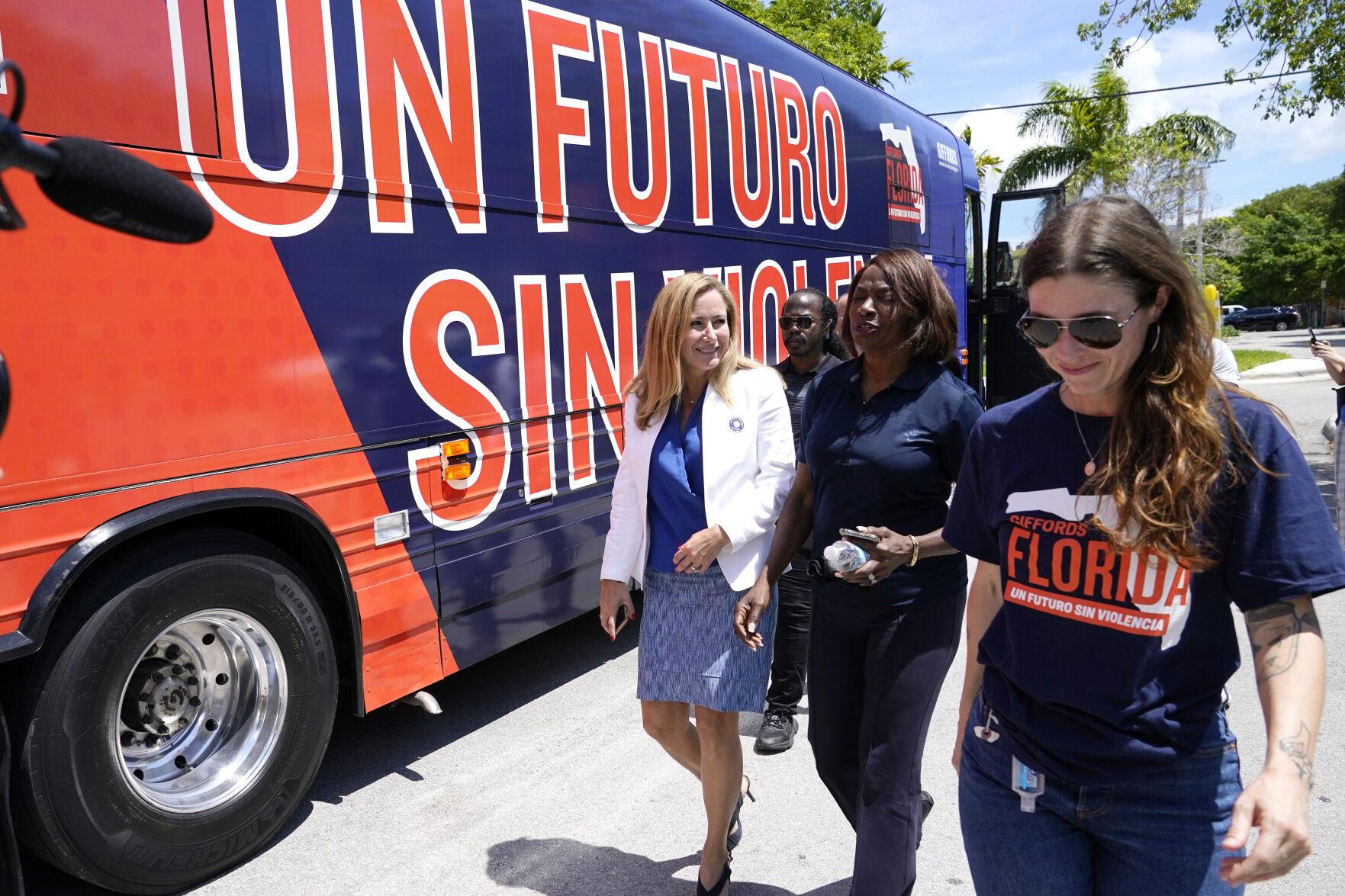 The Sunshine State-specific arm of national gun safety group Giffords kicked off a five-day bus tour Thursday in Miami, and there was no shortage of criticism aimed at incumbent Republicans facing pro-reform Democratic challengers in November.

“Gun safety is a winning issue here in the state of Florida and across the country,” said former U.S. Rep. Debbie Mucarsel-Powell, now a senior adviser to Giffords.

That’s true, according to a survey Public Policy Polling conducted this year. The group found 69% of Floridians would be more likely to vote for candidates who support background checks and a July poll, which revealed more than 85% back stricter gun control measures.

To harness that well of support, which transcends political affiliation, Democrats including former Governor and U.S. Rep. Charlie Crist, who is taking on Gov. Ron DeSantis, and U.S. Reps. Kathy Castor, Lois Frankel and Ted Deutch will participate in stops through Tuesday.

“We broke a three-decade logjam on (gun) reform, and that will save countless lives,” Wasserman Schultz said, referring to the June passage of the Bipartisan Safer Communities Act, which among other things cleared more than $1 billion for state and community gun safety measures, strengthened background check protocols and raised penalties for illegal gun sales.

That bill passed, she said, thanks to the efforts of people like Guttenberg, Ambler and Gabby Giffords, a former Congresswoman who was critically injured in a 2011 shooting in Tucson, Arizona.

“There’s a reason Gabby was awarded the Medal of Freedom,” Wasserman Schultz said. “Every day, she takes up the fight that people like María Salazar, Marco Rubio and Ron DeSantis are too cowardly to confront.”

Over the course of his career, Rubio has accepted $3.3 million in donations from the National Rifle Association, according to Brady: United Against Gun Violence. Most recently, he joined fellow Florida U.S. Sen. Rick Scott in voting against the Bipartisan Safer Communities Act. The measure, which President Joe Biden signed in June, cleared $1 billion for local violence prevention initiatives, increased background check strictures and strengthened penalties for illegal firearm sales.

Rubio praised part of the law that made permanent a federal clearinghouse on school safety but took exception with the bill’s “inadequate” constitutional protections.

Guttenberg, whose daughter, Jamie Guttenberg, was among those killed in the 2018 shooting at Marjory Stoneman Douglas High School in Parkland, said Rubio has been “unwilling to deal with the reality of ‘gun’ in gun violence.”

“After years of engaging with some Parkland families on many of the measures in the Bipartisan Safer Communities Act, he still voted against that bipartisan legislation,” he said. “He continues to do what he does, which is spin in circles saying and doing nothing.”

Demings added later, “You would think that every elected leader at all levels would have the political courage to do what is right and in the best interest of the people that they represent, but we’re painfully reminded today that that’s not true.”

Asked to respond, Rubio’s office on Thursday pointed to his support of the STOP School Act of 2018 that improved school protections against attacks in the aftermath of the Parkland shooting and his current backing of the Extreme Risk Protection Order and Violence Prevention Act, which would boost red flag laws, and the Luke and Alex School Safety Act.

“In the aftermath of Parkland, Sen. Rubio sat down with Republicans, Democrats, students, parents, law enforcement and others to find common ground,” Rubio’s communications director, Elizabeth Gregory, said by email. “While they don’t agree on everything, they were able to make significant progress, including with the STOP School Violence Act.”

Taddeo and others similarly criticized Salazar for opposing bills authorizing active shooter Amber alerts and banning assault-style weapons, as well as another measure to raise the age limit for people buying semi-automatic rifles.

“She voted against red flag laws,” Taddeo said. “I could go on and on with all the votes. And yes, she has peppered a few good votes here and there, but only after I got in the race.”

Salazar did indeed oppose the Protecting Our Kids Act, which cleared the U.S. House in June but failed to gain traction in the Senate. That same month, however, she was one of 10 GOP members of Congress to break with her party to vote for a different but successful measure raising the age for AR-15-style rifles purchases from 18 to 21 following the mass shooting in Uvalde, Texas.

AR-15s are just a small subcategory of semi-automatic rifles capable of firing two calibers of ammunition common in many other rifle types with near-identical firing capabilities.

In March 2021, long before Taddeo filed to run against her, Salazar also voted with U.S. Rep. Carlos Giménez for an ultimately unsuccessful Democratically backed bill that would have expanded background checks on gun purchases.

The move earned her applause from Everytown for Gun Safety Action Fund and its grassroots network, Moms Demand Action and Students Demand Action.