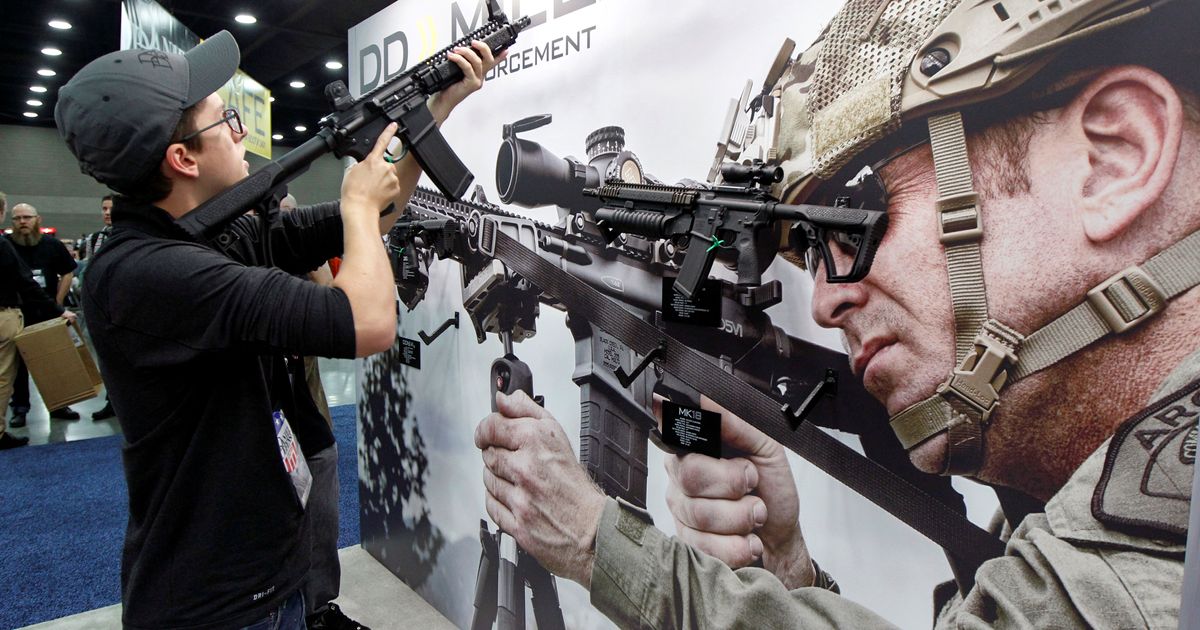 Marty Daniel began shooting guns, as he would recall in an interview almost 20 years later, because he was frustrated with his golf game. When he wanted a rail system for his AR15 to mount scopes, laser sights, and range finders, he couldn’t find a company that made one, so he invented his own. The rail was such a hit with gun buffs that when U.S. Special Forces saw it demonstrated at a gun show in 2002, they awarded his company, Daniel Defense, a $20 million contract.

Around then, Daniel Defense won an even larger contract with the British government, but this time it would need help fulfilling it. It partnered with RPT, an arms exporter, and delivered a portion of the contract before RPT sued. They claimed Daniel Defense was trying to cut them out of future sales by hiring RPT employees to obtain proprietary information on dealing arms in the United Kingdom to sell directly to the British, “willfully and maliciously injuring” their business. The lawsuit was settled out of court, and both companies declined to comment. According to the lawsuit, the deal was expected to earn the gunmakers more than $31 million in sales to the British government.

It was an early example of how Daniel and his company bulldozed their way into the multibillion-dollar firearms industry, establishing themselves with lucrative government contracts before pivoting to sell weapons to consumers by stoking fears that, at any moment, the government may come for their guns. Their trajectory tracks that of the AR15-style rifle they sell, a once-niche product that is now ubiquitous as a firearm and political symbol. Daniel Defense was virtually unknown outside of the world of gun enthusiasts until one of their customers last month legally purchased a DD4 rifle and used it to kill 19 children and two teachers at an elementary school in Uvalde, Texas.

Daniel Defense isn’t a legacy player in the industry like Colt, Remington, or Smith and Wesson, but they compete at the high end of the market, selling assault-style rifles at much higher prices than its competitors. The DD4 used in Uvalde goes for close to $2,000, more than three times the price of Smith and Wesson’s comparable AR15, and the prices of other Daniel Defense weapons can exceed $3,000.

Key to the company’s success has been Daniel, who aired his business philosophy in a 2016 video filmed for the online outdoors network Carbon TV. Viewers are taken through the company’s Georgia factory where workers compliment the founder’s sharp mind and his leadership. “A boss is someone who cracks a whip and leads from the rear, a leader is someone who takes charge and leads from the front,” one employee says. Finally, the video shows Daniel sitting with a small boy, teaching him how to shoot a rifle. “There are two types of people in the world, good people and evil people,” Daniel says over a rock-music score as he shows the boy how to aim. “And just in case evil people get in charge, good people need to have the ability to fight back.” (Days before the Uvalde massacre, the company tweeted out a picture of a toddler holding rifle captioned with a quote from the Book of Proverbs: “Train up a child in the way he should go, and when he is old, he will not depart from it.”)

“Daniel Defense took on Marty’s personality,” says Ryan Busse, a former executive at the Kimber Manufacturing gun company who became a critic of the industry. “Walk in the room and be louder and more bombastic than everybody else and act like you are bigger than you are and eventually you will be.”

Daniel Defense entered the consumer market just after a downturn for gunmakers that began in the late 1990s. “For many years, hunting has been in decline, so long-gun sales were also in decline. And when crime dropped in the Clinton years, gun sales dropped,” says John Donahue, a Stanford law professor who studies gun violence. Daniel Defense started making AR15 for the general public in 2009, but it wasn’t until three years later that their sales took off.

“The mass shooting at Sandy Hook Elementary in 2012 drove a lot of sales,” Daniel told Forbes in 2017, where he explained his origin story. “That was a horrible event and we don’t use those kinds of terrible things to drive sales but when people see politicians start talking about gun control, they have this fear and they go out and buy guns.”

As the industry started telling it, owning a gun was no longer about hunting or protection at home but rather freedom and the menace of a tyrannical government. “When the industry realized this could be used both politically and to make fortunes, then companies big and small began to make” assault-style rifles, Busse says. Gun enthusiasts are quick to point out that the AR15 has been around for more than half a century and has been coveted by many for legitimate purposes because it is reliable, lightweight, and powerful. “Prior to 2006, the industry didn’t market or sell the AR15, it was a small market and rarely saw them at trade shows,” Busse says. The federal ban on assault weapons had just expired, and the industry was about to make a pivot to selling military-specification weapons like the AR15. The gun industry was also about to get even more antagonistic toward its opponents. “The AR15 has become a weapon that you own to own the libs, so whatever the libs do, like oppose AR15 style guns, we are going to do the opposite,” says Donahue.

A year after Sandy Hook, Daniel Defense filmed a Super Bowl ad showing a Marine coming home to his wife folding clothes and their newborn baby. At the end, the Marine says, “I am responsible for their protection, and no one has the right to tell me how to defend them. So I pick the best tool for the job.” The video ends with the Daniel Defense logo above an AR15-style rifle and the words “Defending Your Nation, Defending Your Home.” The NFL rejected the ad and a minor controversy ensued with Marty Daniel appearing in right-wing media, including an appearance on Fox and Friends.

The growing business also meant Daniel could get involved in politics. In the last two presidential elections, Daniel Defense gave a combined $400,000 to Republicans, and the company has already contributed another $200,000 to Republican candidates during the 2022 midterms. He also began to buy influence in the gun lobby. In 2014, Daniel Defense became a national corporate sponsor of the Friends of the NRA, the association’s fundraising arm, and he would eventually earn the exclusive title of guardian-level sponsor.

By the time the heated 2016 presidential election arrived, politics became part of Daniel Defense’s business strategy. Fear of a Hillary Clinton win and paranoia about her sending in government officials to confiscate weapons rippled through the gun world, and manufacturers took advantage. That year was one of the best in the company’s history, raking in more than $73 million, mostly from consumer sales. “There were a lot of people in the gun business who were for Donald Trump but were planning on Hillary Clinton,” Daniel told Forbes. “We had a Trump plan and a Clinton plan.”

When Trump became president, Daniel Defense stuck by him, going so far as to support a White House measure to fix irregularities in a gun registration database following an error that allowed a gunman to purchase weapons he used to attack a church in Sutherland Springs, Texas in 2017. Gun-rights advocates unleashed their collective fury on Daniel and he pulled his support for the reform. While Daniel Defense continues hawking weapons to consumers, they are also still profiting handsomely from the Pentagon, winning a $9.1 million contract earlier this year.

Daniel Defense was scheduled to be at the NRA’s convention in Houston on the weekend after the attack in Uvalde. The company pulled out and released a statement offering to keep the families of the victims and the community in their “thoughts and prayers.” There’s no evidence though that the company’s bottom line would suffer — Smith and Wesson saw its stock rise 8 percent in the days following the massacre. If the past is any teacher, then the backlash against the demand for tightening the laws around guns will only drive even more sales. “The first part of getting people to buy guns,” says Donahue, “is to scare people.”

Daily news about the politics, business, and technology shaping our world.

By submitting your email, you agree to our Terms and Privacy Notice and to receive email correspondence from us.

Letter: Where is the Republican courage on banning assault weapons?
If GOP legislators put abortion bans on the ballot they’d see they’re out of touch
Dan Wesson Guardian 1911 #shorts
Shooting the Breeze # 21
mail call with kid