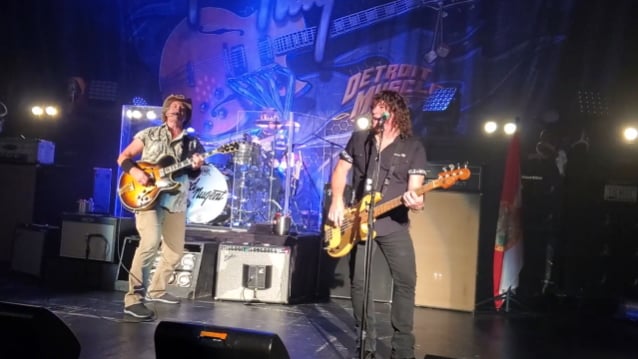 During his recently launched “Detroit Muscle” U.S. tour, outspoken conservative rocker Ted Nugent has been changing the lyrics to his song “Come And Take It” to reflect his disdain for the current U.S. president.

Instead of singing the tune’s title as it appears on the recorded version on his “Detroit Muscle” album, Ted has been altering the words to say “fuck Joe Biden” and “Let’s go, Brandon“, the latter of which is conservative code for “Fuck Joe Biden“, born when a NASCAR reporter misheard a crowd, reporting that they chanted in support of racer Brandon Brown when they were actually chanting expletives toward the U.S. president.

Nugent was asked about the lyrical change during the latest edition of “The Nightly Nuge”, a news-style clip in which he offers his take on the news of our world. He said: “Well, one of my new love songs is [sings and plays guitar] ‘Come And Take It’. Then we go, ‘Let’s go, Brandon.’ And you can imagine what the next line is: ‘[unintelligible] Joe Biden.’ Yeah, they sing along without any… It’s very inspiring. But it has become… Of all my killer songs, and we try to rotate probably like 15, 16 or 17 songs a night — just magic, magic songs — but I’m thinking that ‘Come And Take It’, that has morphed into ‘Mad Joe Biden‘, people sing that [and] nobody’s feet touch the ground.

“So love is in the air. Because I love freedom, and I hate people who would deny us freedom. And I’m afraid this punk in the White House deserves all the condemnation that we give him.”

In the last couple of years, Nugent has been selling hats emblazoned with the words “Come And Take It”, a slogan which originated in the Texas Revolution in 1835 and is now used as a symbol of gun-rights advocates and the NRA.

The follow-up to 2018’s “The Music Made Me Do It”, “Detroit Muscle” was recorded with Ted‘s current band, which includes bassist Greg Smith and drummer Jason Hartless.

Last December, Nugent described “Come And Take It” to Florida’s 99 Rock WKSM radio station as “a love song to the punks in our government who think that they have the right to infringe on our constitutionally guaranteed, God-given individual freedoms. So I sent them a love song. In fact, I sent a copy of ‘Come And Take It’ to Joe Biden and [Texas Democratic gubernatorial candidate and former U.S. representative from El Paso] Beto O’Rourke. And I said, ‘If you’re gonna infringe on our Second Amendment, start with me.'”

Nugent, who is the national spokesman for pro-hunting lobbying group Hunter Nation, went on to say that “people love” “Come And Take It”. “I think it really represents the heartbeat, the pulse, the heartbreak, really, of thoughtful, critical-thinking Americans,” he explained. “Which, by the way, if you’re not a critical thinker, you should probably move to Cuba where you’re not allowed to be. Critical-thinking Americans that are rock solid in the asset column love this song — they love me, they love freedom, they love defiance, they love my middle finger on fire.”

Nugent, who recently resigned from the board of the National Rifle Association (NRA) after 26 years, has called Donald Trump “the greatest president in our lifetime.” He also said the billionaire real estate mogul represents “the heart and soul of the best American families out there.”

Leading up to the 2020 presidential election, Nugent teamed up with Donald Trump Jr. on the campaign trail.

Last year, Nugent declared Biden a “rotten” human being and railed against Democrats who support the president’s “ugly policies.” At the time, he told host Samuel Ayres of “The Wild Initiative” podcast: “You say that some of the liberals have good intentions. I haven’t met one. And I meet an awful lot of people. Because if you are on the side of Joe Biden, you’re just plain a rotten human being. You support a man with a liberal agenda that renegotiated all the contracts with the globe that Trump finally negotiated on behalf of our country. That’s not my hunch; that’s not a guess; that’s not an opinion. Trump renegotiated global contracts for the first time in my lifetime to actually benefit America, and Joe Biden reversed them to hurt America. So if you’re a liberal and a Democrat, you’re the enemy of freedom. And if you don’t believe in those ugly, ugly policies, then you have to quit.”

He continued: “If you don’t agree with forcing Americans to get vaccination passports, but people are flooding in through the borders without any vetting whatsoever, then you have no soul, and you can’t be on that team. If you disagree with these toxic, dangerous, tyrannical policies, you’ve gotta quit that gang. That gang is the Democrats. Their agenda is extreme liberal Marxism. And if you’re part of that team, you’re as rotten as that man who’s searching for a syllable in the White House.”

Nugent has repeatedly said that the 2020 presidential election was a fraud, insisting that “hundreds of thousands of dead people” voted and claiming that machines were “rigged” to give a Donald Trump vote to Joe Biden.

Nugent, known as the “Motor City Madman,” moved to Texas from Michigan nearly two decades ago.

Commentary: This Republican, NRA gun owner has had enough
‘Lock and load’: MAGA extremists lash out after Mar-a-Lago search
Letter: Where is the Republican courage on banning assault weapons?
How A Surge Of Super PAC Money Upended A Hawaii Congressional Primary
Biden vs. Trump? CT election takes shape with presidential figures at the heart of races