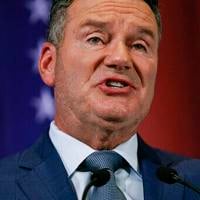 Michels has several concerns for a conservative like me. He falsely claimed to be endorsed by the National Rifle Association’s Institute for Legislative Action which prompted the NRA to issue this statement: “Misrepresenting our ratings or our position in any election contest does a disservice to you and all our members, as well as other gun owners to whom protection of their liberty and firearm freedoms is a factor in how they vote.”

Michels was the board president of the Wisconsin Transportation Builders Association which lobbied for higher gas taxes. Having moved his family to Connecticut for the past 10 years, I question his interest in Wisconsin school reform.

Wisconsin conservatives have been fooled before resulting in disappointing Supreme Court decisions. We cannot risk the election for governor on an unknown. Vote for Kleefisch for governor on Aug. 9.