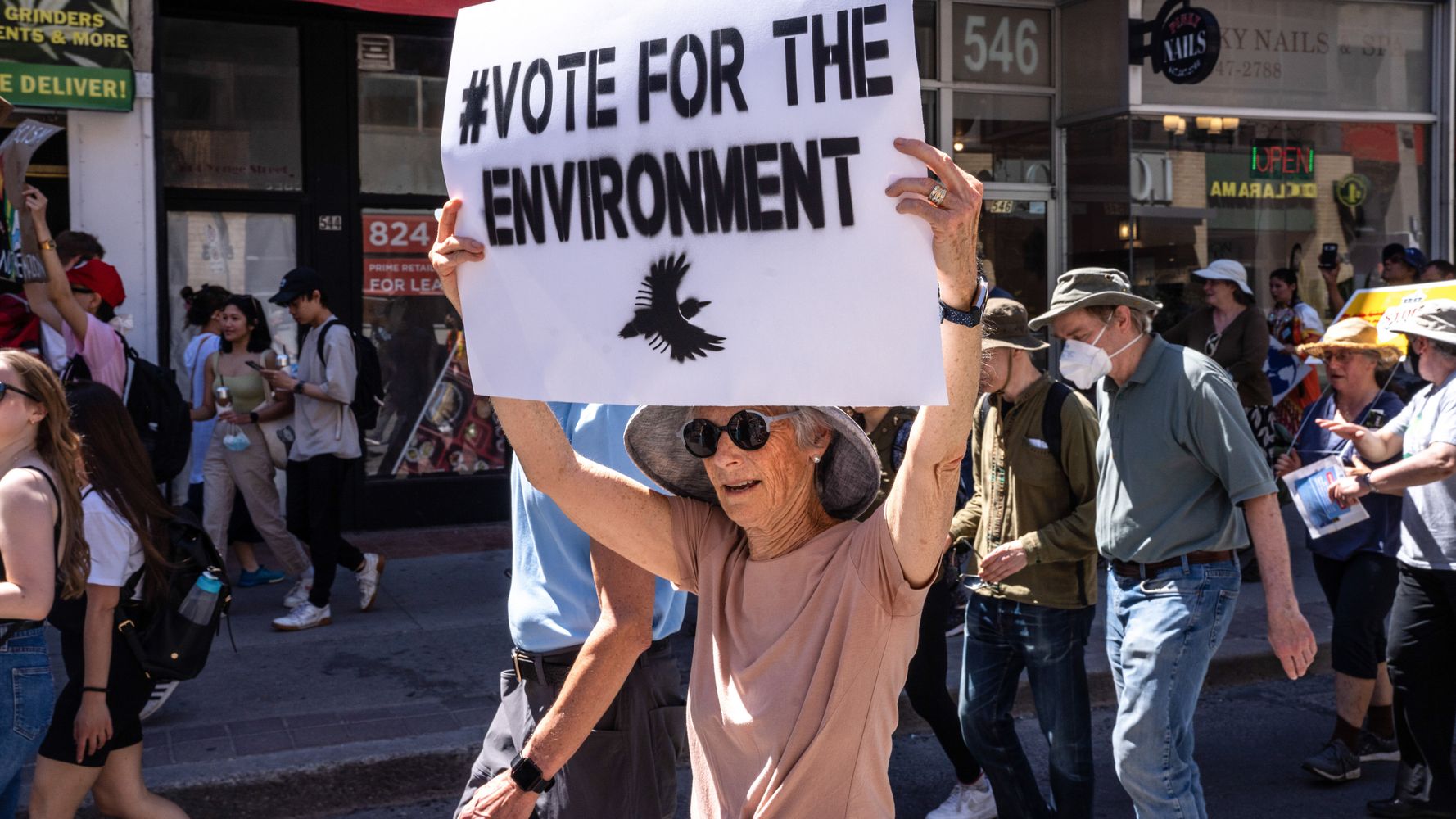 Vast swaths of the United States are roasting in record heat that threatens blackouts, near-biblical droughts and deaths. Yet as Americans prepare to go to the polls for the 2022 midterm elections, surveys have largely shown the economy, crime and abortion far outranking climate change as voters’ priorities.

But serious environmentalists could help swing tight elections in at least two battleground states this year ― if those registered voters could be persuaded to actually cast their ballots.

That’s according to a new survey from the Environmental Voter Project, a nonpartisan group whose algorithms use consumer data and public voter registries to identify registered voters who don’t vote but consider climate change a priority.

The nonprofit’s army of volunteers then targets those voters with a traditional get-out-the-vote campaign in hopes of building a base of green voters whose disciplined turnout can do for climate policy what the National Rifle Association did for gun deregulation.

From July 5 to 20, the Environmental Voter Project hired the polling firm Beacon Research to survey 3,296 registered voters in Arizona, Georgia, Nevada and Pennsylvania. The poll included large samples of both likely and unlikely voters.

The findings confirmed that issues such as cost of living, jobs and abortion were top of mind for voters this summer, with just 5% picking climate change as their foremost concern. But Stinnett said that sliver could make a difference in races that come down to a few thousand votes.

“There are millions of people, and hundreds of thousands in these battleground states, who care so deeply about climate change that they’re saying this is the most important factor when I choose a candidate,” Stinnett said. “What’s going on is not that all the climate voters disappeared. They’re still here. They’re just less likely to vote. They’re politically disengaged.”

Surveys have for years shown widespread support for progressive policy reforms on issues such as the climate and health care, but highly partisan political priorities haven’t aligned with voters’ interests.

There are multiple factors at play, including lax laws on industries’ influence peddling, partisan political machines and gerrymandering. But candidates have in recent years sought to mobilize new voters with varying degrees of success.

Polls showing that nonvoters were more likely to hold “very liberal” views anchored Democrats’ hopes in the last election that record turnout might turn the tide in their favor.

During the 2020 presidential primary, Sen. Bernie Sanders (I-Vt.) bet he could beat a crowded field of Democrats for their party’s nomination by appealing to voters who, feeling hopeless about the impact they could make, had given up on voting. But the strategy failed to overcome Joe Biden’s late surge on the backs of Democratic stalwarts.

Still, nearly two-thirds of eligible voters cast ballots in 2020 and delivered Democrats the White House and both chambers of Congress. Stinnett’s group may be able to claim some responsibility there. Over the past six years, he estimates that the group has converted nearly 1.1 million nonvoters into routine lever-pullers.

Yet Democrats’ legislative majority has so far proved too narrow to overcome policy disagreements within the party, though there were signs Wednesday that part of the party’s climate agenda might pass muster for Sen. Joe Manchin (D-W.Va.). The conservative lawmaker, whose family owns a coal business, is widely seen as the deciding vote on a climate spending package that can pass without a single Republican vote, but only if every Democratic senator approves.

The base of voters Democrats need to turn out this year are pining for some kind of policy win. Forty-nine percent of Democratic voters the Environmental Voter Project surveyed said the party’s lawmakers in Congress were doing “too little to address climate change,” compared to 35% who said it’s the right amount and 6% who said the party’s agenda was too much. Among independents, 43% said Democrats were doing too little, 11% said the right amount and 18% indicated too much. Even 33% of Republican voters said Democrats should do more.

“Don’t shame nonvoters,” a Sanders campaign tweet read in 2019. “Listen to them. Learn about their issues. Explain to them how voting can help their lives and those they care about.”

Stinnett agrees with only part of that. His group targets likely environmentalists with materials that rarely, if ever, mention climate change or ecological crises. Instead, he said, the Environmental Voter Project seeks to shame green nonvoting voters with phone calls, texts, mailers and door-knocking, reminding them it’s important to vote, that failing to vote is a matter of public record and that their neighbors are voting.

“People are social beings, and they change their behavior based on the norms that they try to fit into,” Stinnett said.

“We need to think more like beer commercials,” he said with a chuckle. “Dos Equis doesn’t sell you a beer by telling you the ingredients. It sells you a beer by saying, ‘Don’t you want to be like this really cool dude in our commercial?’”

The ‘Army Of Environmental Super Voters’ Is Growing, And Marching On City Hall

Supreme Court Signals It May Rein In Federal Rulemakers
‘Lock and load’: MAGA extremists lash out after Mar-a-Lago search
All Seasons Press Announces Signing of Former Levi’s Executive Jennifer Sey to Book Deal
Shooting the Breeze # 15
What to Watch in Hawaii’s Primary Elections