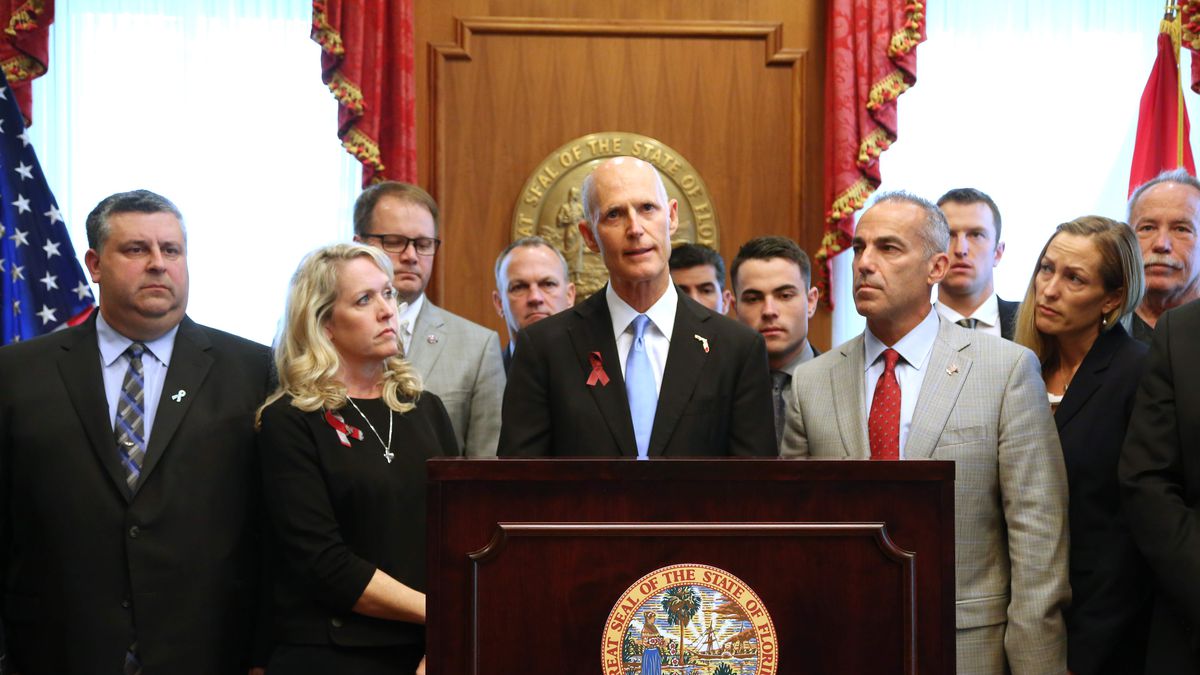 The federal bipartisan gun package passed into law late last month has been hailed as historic progress on an issue that has gridlocked Congress for decades.

But the gun control measures in it are less robust than what Florida’s Republican-controlled Legislature, in its own moment of fragile bipartisanship, passed in 2018 during the aftershocks from the Parkland school shooting.

State leaders involved in passing that bill saw echoes between the national debate following the school shooting in Uvalde, Texas, and their own work four years earlier. But some said, if anything, the politics surrounding guns have become even more charged in those years. And they know firsthand the difficulty of continuing to push forward gun safety measures as more time passes after a tragedy.

State Sen. Lauren Book, D-Plantation, who is a member of the statewide commission that studied the Parkland shooting, said it’s clear Florida politics have changed.

“The consensus people have shared with me is that (Florida’s 2018) bill would never have passed today,” she said. “We’re in just such an ugly, acrimonious, viscerally divided place and time.”

Related: Dangerous but disarmed: How Florida has confiscated thousands of guns

In early June, following the shooting massacre of 19 children and two teachers in Uvalde, President Joe Biden and his allies, including actor Matthew McConaughey, pitched the nation on some proposals that were nearly the same as what Florida passed in 2018. But coming from a relatively unpopular Democratic president, the ideas faced long odds among Republicans.

The final bill that passed Congress covered topics similar to Florida’s post-Parkland bill, but with a lighter touch: Instead of raising the gun purchasing age, it increased scrutiny for buyers under 21. Rather than create a nationwide red flag program, it set aside funding to encourage states to enact the laws themselves. It did not implement any explicit waiting periods, but did address the so-called “boyfriend loophole” for some domestic abusers’ ability to buy guns.

Florida’s two Republican senators, including Rick Scott, who was governor in 2018 and signed Florida’s bill, both voted against the federal proposal. Scott addressed this in a statement explaining his vote, saying that despite many people comparing the two bills, they “are not the same at all.”

Scott called the bipartisan negotiations over the bill “secret backroom dealings,” and said it will provide federal funding for “even the most radical policies, like California’s red flag law.” He also objected to restoring some domestic abusers’ gun rights after five years. According to the New York Times, that was inserted as a concession by Democrats to Republican negotiators.

Get insights into Florida politics

Political editor Emily L. Mahoney will send you a rundown on local, state and national politics coverage every Thursday.

Sen. Marco Rubio said in a statement that “the constitutional protections in the package are inadequate” but praised the inclusion of a federal clearinghouse on school safety best practices, which was based on legislation he and Scott co-sponsored. Rubio has also previously said red flag programs are better handled at the state level so that proceedings over individuals’ gun rights aren’t held in federal courts.

Some Florida lawmakers said news of the Uvalde shooting transported them back to the days after Parkland.

Former Sen. Bill Galvano, a Republican from Bradenton, toured Marjory Stoneman Douglas High School with other state leaders while blood was still on the floors and homework scattered in the parking lot. He said he went home and sketched out the bill on a yellow legal pad.

Building support for the bill “was no easy task,” said Galvano, who later became Senate president and is now a lawyer in private practice.

“You had forces working against the bill on both sides of the (political) spectrum,” he said. “I think that no one wanted to leave that session after that tragedy … and just offer thoughts and prayers. That wasn’t going to cut it anymore.”

Because of its gun control elements, Florida Republicans who supported the measure received jars of tar and feathers to their offices.

Democrats who voted for it went against others in their party who couldn’t stomach a piece allowing school staff to be armed. Black Democrats, in particular, expressed deep-seated fears about how students of color could be at risk.

“Both sides had to move a little — I think (Republicans) moved more — in order to try to protect kids,” said former state Rep. Jared Moskowitz, a Democrat and an alumnus of Marjory Stoneman Douglas High School who helped build support for the law. He’s now running for Congress. “I think on that day, it was just more important.”

But in Florida, the bipartisanship was temporary.

Moskowitz said it’s not that Florida politics have shifted since 2018, but that the raw shock of the Parkland shooting briefly suspended the normal rules.

“Florida snapped back, politically, the day after we passed that bill,” he said.

Book said she thinks the Legislature has also changed in the past four years. State lawmakers and staff from both parties now commonly lament increased division and an environment where seemingly every issue gets political — or personal.

“The openness to have honest dialogue to create policy, you don’t have that today,” she said.

Since 2018, Florida lawmakers have continued to add layers and tweaks to school safety procedures in follow-up laws. But 2018 stands alone as the year when gun control was passed.

“The perception was different,” Galvano said. “You had a lot of pushback from the NRA … the unity of the members in a bipartisan interest in seeing another change did not exist at that time like it did in 2018.”

Today, Florida has a different governor, one who said that he would have vetoed the Parkland legislation. Recently, Gov. Ron DeSantis went further, promising that he would sign a bill allowing for Floridians to carry guns without permits before he leaves office. Sometimes called “constitutional carry,” the measure has failed to get even a hearing in the Republican Legislature in the past.

April Schiff, a Tampa Republican political consultant who represents Hillsborough County in the state party, said there’s “quite a bit” of support among Republican voters for the idea.

“I think what we saw in Florida was definitely a specific reaction to Parkland and just the raw pain and the pressure that that caused,” she said. “I don’t see Republicans embracing a lot of that anymore.”