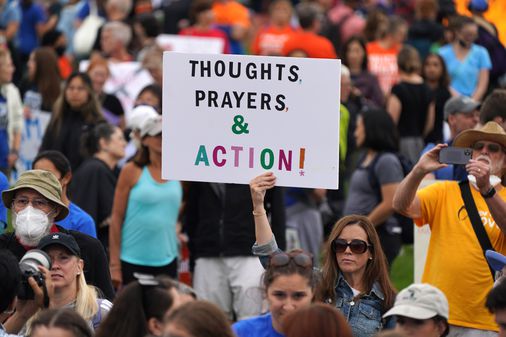 Quiet please! Mustn’t disturb the Republicans hard at work trying to do as little as possible about guns.

Lord, it is excruciating to watch congressional negotiations stall over proposed gun safety laws that are already woefully — tragicomically — inadequate to begin with.

But this is where we are in this country. In the face of regular mass shootings, one of which recently wiped 19 fourth-graders and two of their teachers off the planet, Republican members of a bipartisan group negotiating a gun safety package are hung up, in part, on whether a measure to make weapons harder to get for domestic abusers should include boyfriends.

Obviously, it should. But it’s possible the measure will be nixed so that the bill can come to the Senate floor with support from a fiilbuster-proof majority. Even then, it’s by no means guaranteed the other provisions — enhanced background checks for gun buyers under 21, financial incentives to create state red flag laws, stronger efforts to prevent trafficking, and money for mental health and school security — will make it, pathetically basic though they may be.

We will grow old, and many more of us will die in mass shootings, before we see the kinds of measures we truly need here — like a reinstatement of the assault weapons ban, or, at the very least, a law prohibiting 18-year-olds from buying such murder machines.

But the large majority of Americans interested in fundamental, common sense gun safety measures don’t have to sit around and wait for the National Rifle Association’s vassals in Washington to toss them crumbs.

That’s the message Massachusetts legislators are trying to send, via an open letter to their fellow legislators across the country. Developed by Cambridge Democrat Marjorie Decker with backing from House Speaker Ron Mariano, the letter touts the common sense gun laws passed here, and urges those who want to enact similar laws in their states to use Massachusetts as a resource.

“You don’t have to wait for Congress to save lives,” Decker said. “People are dying.”

We are lucky to live in a state with fundamental safety requirements for gun owners; that banned military-style assault weapons and high-capacity magazines; that subjects those seeking gun permits to closer scrutiny; that has a red flag law to allow police to remove firearms from a home when a person is a danger to themselves or others. There’s no question that the measures passed here over the last decade are working. In 2020, Massachusetts had the second-lowest firearm death rate in the country, after Hawaii. That’s no coincidence.

Nobody is suggesting stronger laws will stop all mass shootings and other gun deaths in this country. America is terminally awash in weaponry. And state laws can only do so much: There is no checkpoint at the border that would prevent a determined person from buying guns in a state with weak laws, like New Hampshire or Maine, and bringing them here.

But the numbers speak for themselves. Making it harder for somebody who means harm to acquire weapons saves lives.

While some states look at horrific massacres like those in Buffalo and Uvalde, Texas, and decide, as New York and Rhode Island did recently, that they want to prevent more carnage, others actually loosen gun laws in the wake of those massacres — though usually legislators of that ilk wait until the outrage over massacres subsides before they take steps to make them more likely.

Sometimes miracles happen: After the Parkland school shooting, Florida passed a law to ban the sale of firearms to those under 21 and to require a three-day waiting period on most long-gun sales. But most conservative states — to their shame — will be distinctly unmoved by the carnage in Buffalo and Uvalde, and certainly by the offer of assistance from legislators in blue Massachusetts.

Still, there are plenty of other states where legislators are more responsive to the wishes of their voters — who, once again, overwhelmingly support basic, life-saving gun safety measures. Maybe a little help from Beacon Hill is what they need to make it happen.

We’re so desperate at this point, it’s worth a try.

Is This The Turning Point For The GOP On Guns? Not So Fast.
Greg Gutfeld: Supreme Court’s rulings on guns and abortion in one week is the Super Bowl of Liberal meltdowns
After Cornyn blames jeers at Texas GOP on ‘mob,’ gun rights group demands apology
Gun Control Package Passes U.S. Senate; House Vote Imminent
In major ruling, US Supreme Court says Americans have right to carry guns in public