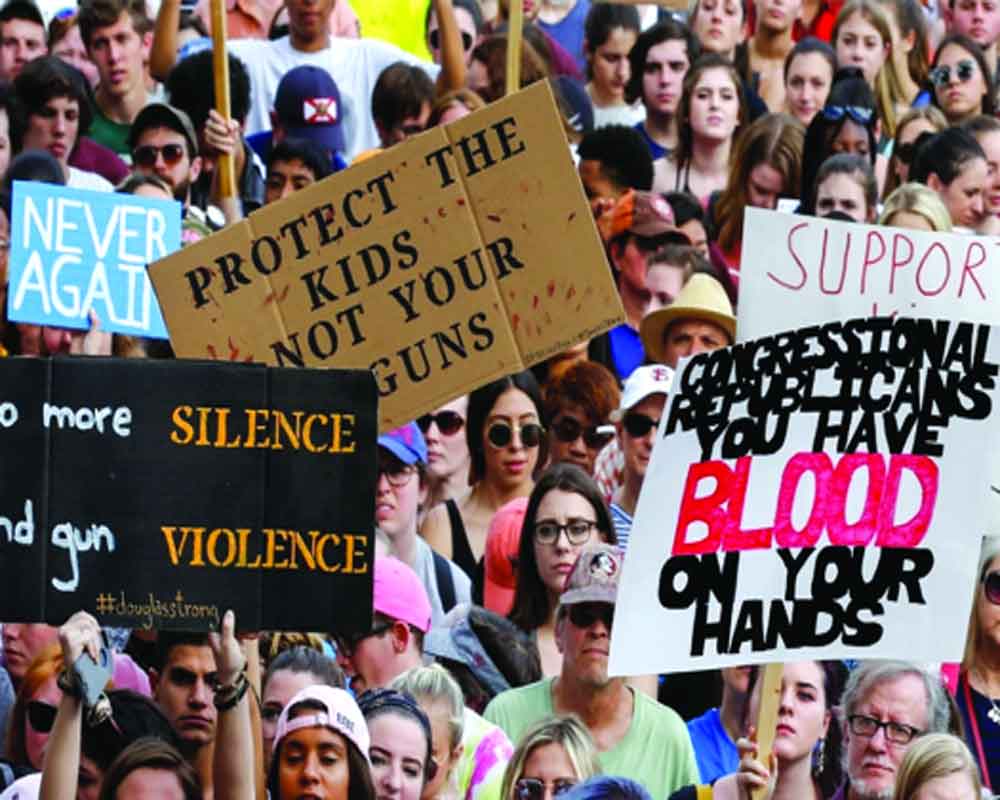 The gun lobby and others are opposing gun control laws

Though the United State House of Representatives passed a Bill restricting the sale of guns on June 8, it’s very unlikely that this Bill will become a law. This is so because Republicans are determined to oppose it in the Senate. Nobody knows for how long ordinary Americans will have to live under the threat that somebody will come and start shooting without provocation. But no doubt in the forthcoming elections, this issue is going to gain prominence. This Bill came after a shocking incident where five people were killed by shooting at the Tulsa Medical building—the 233rd mass shooting of 2022. Before this, a gunman shot and killed 19 young students and two teachers at an elementary school in Uvalde, Texas. Just two weeks before this incident, 10 people were killed and three were injured during a racist attack at a grocery store in Buffalo, New York. The important point here is that in most of these incidents, the killers were not the terrorists but crazy young men. Some people have started saying that it is much riskier to live in the US than going to war in Afghanistan. It is for the first time that any US President has used strong words against the system and culture of owning guns. Joe Biden has called on Congress to ban assault weapons or to raise the age to be able to buy one, from 18 to 21 years and other measures to curb gun violence in the United States in his address on June 2. He has also called for a ban on high-capacity magazines, background checks, red flag laws and a repeal of the immunity that protects gun manufacturers from legal liability if their weapons are used in violence. It’s easy to buy guns in the US. Guns are easily available, and can be purchased almost like vegetables, in thousands of stores, without much background check. Besides, people often buy guns from relatives and friends. To buy a gun, unlike in India, a person need not possess a licence in the US. One has to only give some information about oneself, by filling up a form. Within minutes of the filling up of the information, verification is done by the Federal Bureau of Investigation (FBI) and the gun reaches into the hands of the buyer. According to the website of the FBI, in the last one decade, enquiry was sought in 10 crore cases and only 7 lakh people were found ineligible to purchase a gun, that is, less than one per cent of the total. Almost every citizen of the US is eligible to have a gun. With a spurt in murders in the last few years, it’s being said that ease of having a gun is causing murders and illegal activities.

The demand for gun control has been there for a long time, and many political leaders have been trying to make gun laws stricter. However, they have been facing numerous problems in their endeavour. And behind this, there is a strong gun lobby. Since 1871, there has been a strong organisation called the National Rifle Association (NRA) which has been directly engaged in political lobbying for weak gun laws, since 1934. Though there are nearly 50 lakh NRA members, who contribute for the association, a major chunk of financing comes from gun manufacturing companies. For obvious reasons, this organisation makes every possible effort to thwart any effort to make any strict law against possession of guns. We can gauge the influence of this gun lobby from the fact that the NRA spent about $250 million in 2020, far more than all the country’s gun control advocacy groups put together. The NRA funds Senate members who, in turn, try to defeat efforts to curb guns. President Obama faced a lot of criticism from the gun lobby for issuing some administrative orders, imposing restrictions on purchase of guns. Whether it’s the issue of making stricter gun law or taking administrative action to restrict guns, the gun lobby always tries to create hurdles. President Joe Biden has renewed attempts to restrict guns, but he also doesn’t seem to be in a mood to issue an executive order on the subject. He wants a stricter law to be enacted democratically.

(The author is Professor, Department of Economics, P.G.D.A.V. College, University of Delhi. The view expressed are personal.)