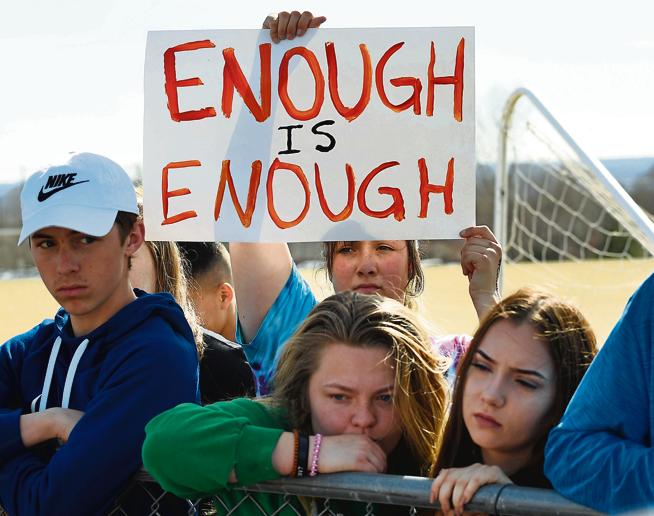 Members of our Community Editorial Board, a group of community residents who are engaged with and passionate about local issues, respond to the following question: Boulder and other Boulder County municipalities are considering creating gun safety measures. Your take?

Military grade firepower should be kept under lock and key at a National Guard facility (or, maybe, a rifle range), with access granted for training purposes only, or in an emergency following a legitimate call to arms from a well-regulated state militia.

The Second Amendment guarantees no more than this, particularly with respect to human killing machines like rocket launchers, flame throwers, hand grenade, AND AR-15s.

Only the NRA’s most fervent and unthinking followers believe otherwise. And our children deserve no less protection from such weaponry than they receive from drunken drivers and pedophiles.

Has the NRA finally reached the bridge too far? Was their laundering of Russian money to support 45’s candidacy not enough? Or their flagrant abuse of the tax code?

How about when good guys with guns stand down while the bad guys fire away? Does the ill-advised delay by trained law enforcement officers in Uvalde, Texas, raise doubt whether armed schoolteachers or police officers roaming school hallways will do as much to stop the carnage as making personal possession of AR-15s illegal?

There is a reason such massacres only happen in the United States. It’s not video games, lack of parental supervision or mental health care system deficiencies alone — although careful consideration of these factors is long overdue — professional studies of armed violence must be authorized. No, it’s the killing machines we permit people in our midst to own with impunity that are destroying our children..

Local regulations clearly expressing that our citizens have had enough, and we are no longer willing to tolerate the behavior or the excuses should be passed. Do everything the state Legislature now permits local governments to do. Then push the envelope.

We must make this abundantly clear: Tolerance of the intolerable is no longer an option.

Killing random children is pure evil. Such grotesque massacres invoke a deep emotional response from me and many others. The urge to “do something” to end these heinous acts is overwhelming. But we can’t govern by emotions, especially when we are so divided on the Second Amendment.

Since 1993, according to the New York Times, 47 Coloradoans have died in mass shootings in public spaces. On average, that’s less than two people a year. As horrific as these atrocities are, they are a statistically small loss of life. Granted, children’s lives are special. They count for more.

But what about all the other causes of death that are much more impactful to Coloradoans? What is our goal here? To save lives or to restrict guns?

We have limited resources and limited political capital. The Boulder City Council knows they can’t do everything at once. Each year they prioritize issues to determine what will be worked. Are the two yearly shooting victims more important than the 1,500 Coloradoans who overdosed in 2020 alone?

Local gun laws feel right, but, like local climate action, aren’t effective at doing anything except making some citizens, maybe most of us, feel better. Feeling better has some value, but we shouldn’t deceive ourselves.

These local laws are, as a colleague suggested, like having a nonpeeing section of a local pool. Just like a Supreme Court ruling overturning Roe v. Wade won’t restrict abortions nationwide since women can travel out of state, statewide restrictions on guns will have little effect because the border is just a few hours away.

We should concentrate on where a difference could possibly be made. Basketball coach Steve Kerr had the right idea when he called out sitting senators for not even allowing a vote on stricter background checks — something the vast majority of Americans agree on.

We need to direct our attention to practical, passable measures, like background checks, at the national level.

July 2012 was the first time I was impacted by a mass shooting. I spent the months following the Aurora theater shooting trying to figure out how to stymie senseless acts of violence like these.

There are plenty of countries that have found a way to strike a balance with gun ownership. Ownership requires a background check, training, vetting, a waiting period and routine recertifications. The types of guns you can own are restricted. No one needs high-capacity magazines, but rifles can still be used for hunting. M4s are excessive, but a handgun to protect your home is acceptable.

There are middle-of-the-roads on this — however, no one seems open to discussing them. It is shameful that we have gotten to the point that China has reported the U.S. to the U.N. for human rights violations due to inexcusable amounts of gun violence and mass shootings.

That said, I am not in the firearms business, and I do not know much about the market when it comes to firearms. I do not know how much of this is possible and how much is not.

We have to start somewhere though, or we will be passive participants in the murder of many of our fellow Americans.

When I was a child, westerns were a mainstay of TV shows, and every episode included gunfights. The men walked around with guns in holsters attached to belts that hung low on their hips so they could quickly draw their weapon in the inevitable saloon fight or duel on Main Street.

I vividly remember asking my dad why everyone in those westerns had guns and why no one I knew wore a gun. He said that back then it was the Wild West and lawless but nowadays our country was more civilized, and we had laws, so there was no need for people to wear guns every day.

I am not sure what happened since that time, but we now seem to be awash in guns. In 2018, our former councilmember Jill Adler Grano proposed an ordinance prohibiting assault-style weapons in the City of Boulder — a leader stepping up to help our community be safer. It was an admirable if Quixotic thing to do. It passed, which is a tribute to all those on City Council at the time.

The ordinance was later ruled unenforceable by a local judge because of a state law that disallowed local municipalities from having their own gun safety laws. Ten days after that ruling, a man with an AR-15 killed 10 of our Boulder citizens in a King Soopers.

That state law was then repealed, and now Boulder and our surrounding towns are meeting to consider additional gun safety laws for our local area.

There will be naysayers who contend that a patchwork of rules are confusing and ultimately unenforceable. But like the cannabis laws in our country, effective gun restrictions may have to come about from citizens and local leaders because our federal government is in a state of filibuster-induced paralysis.

We must start now — enough patches can create a quilt and blanket our country with gun safety measures.