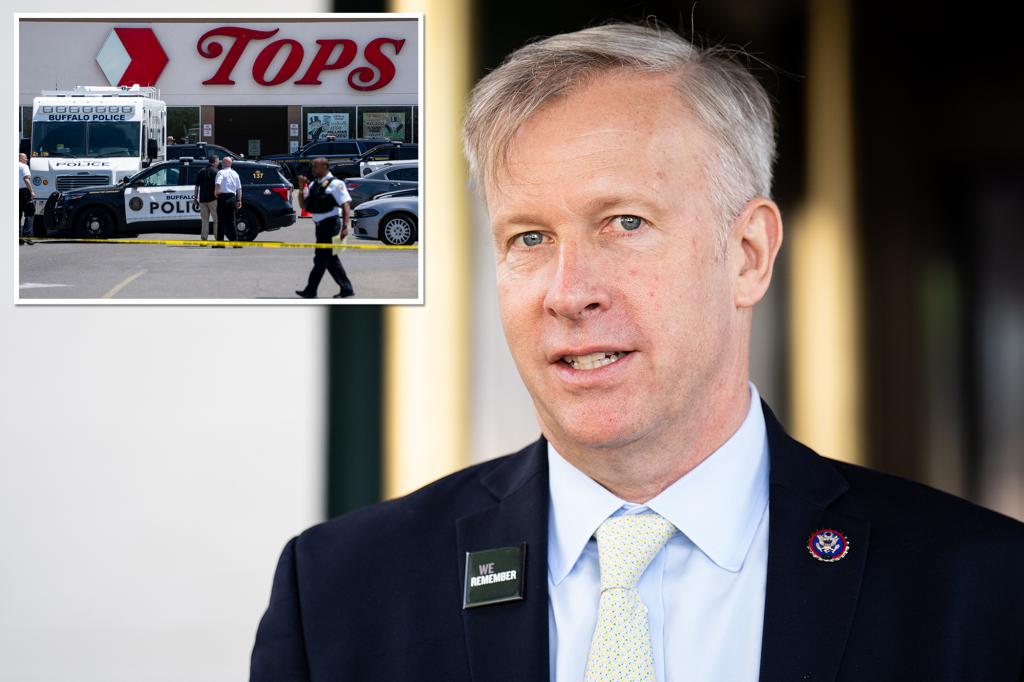 The Republican and Conservative parties are leaving GOP Rep. Chris Jacobs for dead following his call for a federal ban on assault weapons in response to the massacre by an avowed white supremacist in Buffalo.

“This is not the person we endorsed. We did not endorse this Chris Jacobs … he’s actually to the left of [US House Speaker] Nancy Pelosi on this,” Conservative Party state Chair Gerard Kassar told the Post Thursday about his party withdrawing support for Jacobs’ reelection.

The embattled Erie congressman has incurred the wrath of of his party’s far right since saying last week he would support an assault weapons ban, raising the age to purchase semi-automatic rifles and limiting ammunition capacity in gun magazines.

“’Republican’ @RepJacobs already caved to the gun-grabbers whose proposals won’t do a single thing to protect our families & children from criminals & murderers. He knows this but he can’t resist getting a few glowing headlines from the mainstream media,” Donald Trump, Jr. tweeted May 29.

Jacobs — who has previously been supported by the NRA — has said that the carnage exhibited by the Buffalo attack pushed him to support restrictions that are now anathema to the vast majority of people in his party.

“Being a father and having young children and visualizing what those parents are going through and, I guess, being able to feel it more personally certainly has had an impact as well,” he told The Buffalo News last week.

Republican and Conservative party leaders are now scrambling to get a candidate on the primary ballot who could beat Jacobs, who has until end of day Friday to withdraw as the preferred candidate for both parties.

Jacobs, a former state senator and Eric County clerk, did not respond to a request for comment by publication time.

GOP state Chair Nick Langworthy is currently seeking to challenge Jacobs for a redrawn district that includes much of Langworthy’s home county of Erie.

It remains unclear whether Langworthy actually wants to serve in Congress or simply wants to be a placeholder candidate who could be replaced before the Aug. 28 primary elections.

Langworthy could not be reached for comment, but state Sen. George Borrello says he is not ruling out a campaign for Congress against Jacobs, who Borrello had endorsed until Jacobs’ call for an assault weapons ban.

A federal assault ban was approved in 1994 and expired a decade later.

“He has sought the endorsements of every gun group and he should fully understand the impact of that … I understand where he’s coming from but the timing was extremely poor,” Borrello told the Post.

The nascent effort to oust Jacobs comes as Republicans have closed ranks against the idea of passing any new restrictions on gun ownership while expressing support for increased mental health services and additional security at schools.

Jacobs will likely beat the nominee for the Democratic Party – who currently hold a slim majority in Congress – this November if he remains the GOP and Conservative standard bearer in a district that ex-President Donald Trump won by 18 points in 2020.

But Jacobs will likely have to campaign without many of the powerful friends who helped him first win the seat in 2020.

“I’m not going to tell people to vote Democratic, but I would simply say that he would not enjoy active support,” Kassar said.

‘Having a Tragic Situation’ Is No Reason for Abortion: Kristi Noem
Explainer: What changes after the U.S. Supreme Court’s landmark gun ruling?
7 Ways Government Can Save Money and Keep Employees Safe With a UVC Light Cleaner
‘We’re fools for not doing it’: Why some LGBT+ Americans are turning to guns amid a rising wave of hate
How to Remove the NRA’s Cold, Dead Hands From the Republic’s Neck