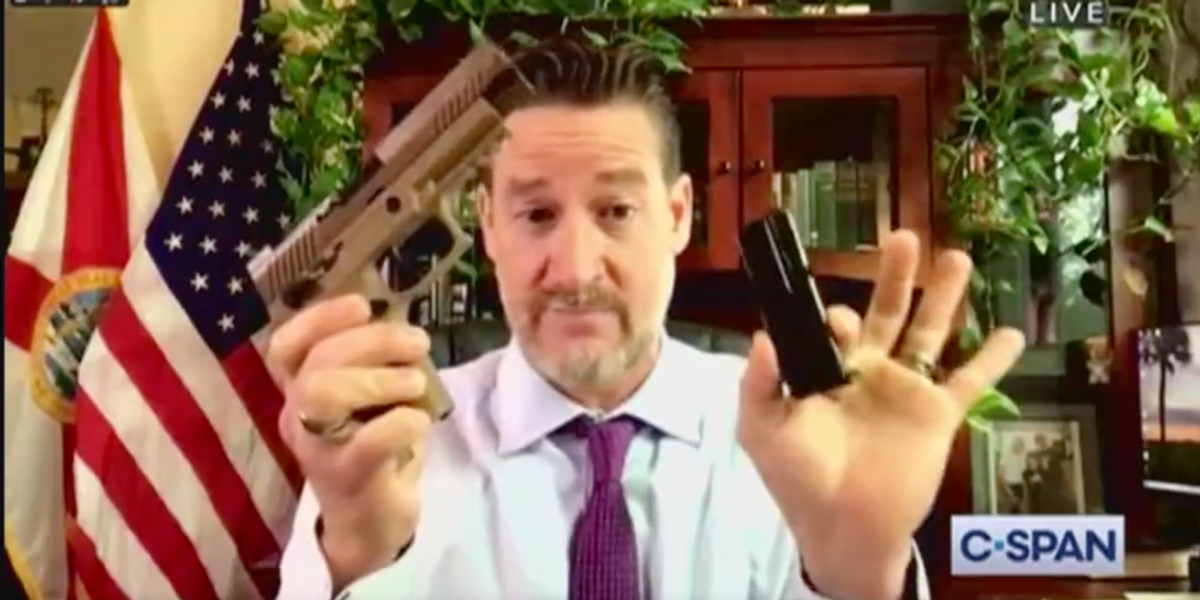 United States Congressman Greg Steube (R-Florida) on Thursday showed off his personal collection of firearms during a House of Representatives Judiciary Committee hearing on gun control. Lawmakers held a virtual conference to debate The Protecting Our Kids Act amid a spate of mass shootings that have erupted throughout the nation. The latest – and 233rd so far in 2022 – occurred at a hospital in Tulsa, Oklahoma on Wednesday evening, leaving five people including the gunman dead.

That bill, “among other things, would raise the purchase age of an assault weapon from 18 to 21 and attempt to crack down on large-capacity magazines and ‘ghost guns.’ It does not include an assault weapons ban,” The Washington Post noted.

Republicans, however, are united against restrictions on gun ownership, a point that Steube emulated on Thursday.

“Here’s a gun I carry every single day to protect myself, my family, my wife, my home,” Steube continued. “This is a XL Sig Sauer P365, comes with a 15-round magazine. Here’s a seven-round magazine which would be less than what would be lawful under this bill if this bill were to become law. It doesn’t fit, so this gun would be banned.”

“I hope that isn’t loaded,” she said.

“I’m in my house, I can do whatever I want with my guns,” Steube snapped back.

Watch below via Vox‘s Aaron Rupar:

Steube was not the only Republican to blame a variety of issues except easy access to guns for the nonstop slaughter.

“We have a serious problem involving family, involving drugs, involving mental health in this country. We have gone the wrong direction in the last 40 or 50 years. We have become a less safe society,” Congressman Ken Buck (R-Colorado) said. “Generally, blaming the gun for what’s happening in America is small-minded. It is unfortunate that we can’t come together as a group of well-thought-through legislators that want to deal with this problem. Pointing the fingers at each other and saying, ‘well you’re only doing this because you’re trying to gain political points on the heels of a dangerous shooting,’ and then for you to tell us that, well, we’re controlled by the NRA. I voted against the NRA. I voted against the NRA when I think they’re wrong.”

Buck was awarded an ‘A’ rating by the National Rifle Association less than a month ago.

Buck also defended the notorious AR-15, the weapon of choice in the vast majority of massacres.

“I’m representing my constituents. In rural Colorado, an AR-15 is a gun of choice for killing raccoons before the get to our chickens. It is a gun of choice for killing fox. It is a gun that you control predators on your ranch, on your farm, on your property,” he said. “The idea that somehow we’re going to deny access to – I think there are 20 million AR-15s in circulation in this country – it makes absolutely no sense, and it’s unfortunate.”

u201cRep. Ken Buck: “Blaming the gun for what’s happening in America is small minded … in rural Colorado, an AR-15 is a gun of choice for killing raccoons before the get to our chickens.”u201d

Meanwhile, Representative Louie Gohmert (R-Texas), became enraged at Congressman Eric Swalwell (D-California) because he “accused Republicans of being complicit in murder” and “that we put our right to kill over others’ right to live.” He launched into a rant about “carnage” stemming from Democrats running big cities and how their party has “trivialized lives.”

Gohmert then took aim at President Joe Biden, whom he contrasted with Franklin Delano Roosevelt “leading the nation in a six to eight-minute prayer” on D-Day.

“Thoughts and prayers” is the most common right-wing reaction to mass shootings.

Gohmert further suggested that Biden has been “using God’s name in vain” and that unspecified “Supreme Court rulings” in the 1960s have led to rampant gun violence.