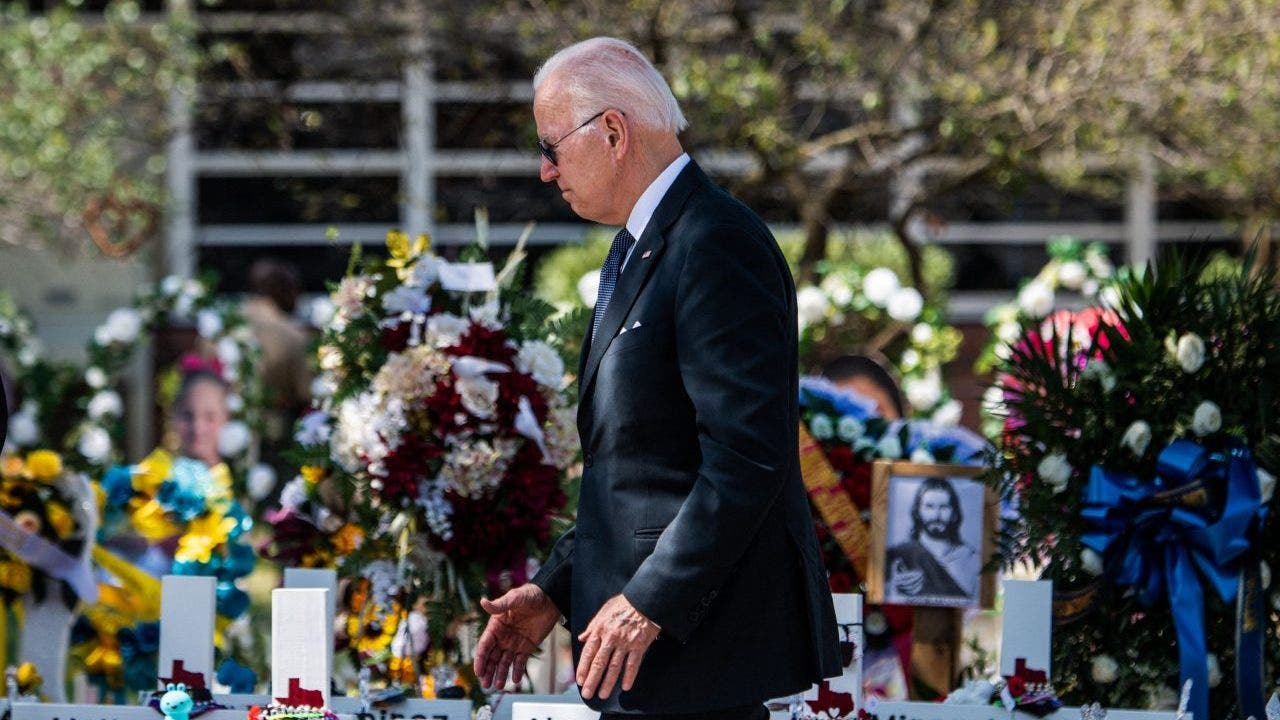 President Biden has made clear he wants serious gun control laws passed, and hopes that “rational Republicans” are willing to compromise.

But will the White House undercut him by announcing that he doesn’t really want to ban assault-style weapons?

The president says he has not negotiated with Republicans, rational or otherwise, because he was comforting grieving families in Uvalde, Texas. But another reason is that he knows that odds are against him on the Hill and doesn’t want to own an imminent failure, as he and Barack Obama did after Sandy Hook, when Biden was the point person on a gun control campaign.

So he’ll let a bipartisan group in the Senate try to put together some modest reforms, although the problem is this Gang of 10 may not be able to sell them to their respective caucuses, especially when a filibuster requires a 60-vote majority.

US President Joe Biden pays respect at a makeshift memorial outside of Robb Elementary School in Uvalde, Texas on May 29, 2022.
(Photo by CHANDAN KHANNA / AFP)

ANOTHER SCHOOL SHOOTING STUNS THE COUNTRY, WITH NO CHANGES IN SIGHT

Biden called Mitch McConnell one of the rational ones, and the minority leader has encouraged Texas Sen. John Cornyn to work with the Democrats. But if the past is any indication, some Republicans may be going through the motions, hoping that passions have cooled after a two-week recess and the Buffalo and Texas mass shootings recede into the background.

“Much of it is preventable, and the devastation is amazing,” Biden said yesterday in a meeting with New Zealand Prime Minister Jacinda Ardern, whose country, along with Canada, imposed stiff gun control measures after mass shootings.

Let’s be clear: No gun law is a panacea, especially in a country awash in weapons and with a strong Second Amendment movement. The alleged shooters in Uvalde and Buffalo had recently turned 18 and legally purchased powerful rifles.

That’s why the Democratic governors of New York and New Jersey are both pushing to raise the minimum purchase age for assault-style weapons or long guns to 21.

But let’s also be clear: Many of the Republicans (and a few Democrats) in Congress don’t want to lift a finger on guns, not because they fear the now-weakened NRA but to avoid the wrath of gun rights supporters for whom this issue is a moral and cultural crusade. They make the slippery-slope argument that even incremental reforms will ultimately lead to gun confiscation, though I’m sure many are privately horrified by these shootings in schools and supermarkets.

It does feel that this time is different – in terms of public anger and disgust over these two shootings. What does it say about our society that Florida police just arrested a fifth-grader–a 10-year-old boy – who made a written threat to conduct a mass shooting?

U.S. President Joe Biden reacts as he makes a statement about the school shooting in Uvalde, Texas shortly after Biden returned to Washington from his trip to South Korea and Japan, at the White House in Washington, U.S. May 24, 2022.
(Reuters/Kevin Lamarque)

But this time is probably not different – in that much of the public is exhausted by the constant carnage, and resigned to the fact that not much will change.

The White House is unlikely to undermine the president on his gun proposals, but that certainly hasn’t been the case on other issues.

It happened after Biden said Vladimir Putin shouldn’t be allowed to remain in power, and after he said the U.S. has a commitment to use its military to defend Taiwan from any Chinese attack. President speaks, White House walks it back.

I have asked, on the air and elsewhere, why Biden allows his aides to embarrass him like that. He’s the president. What he says is the policy. He could simply demand that no statement be issued without his approval, and anyone who violates that order is out of a job.

WHY THE WHITE HOUSE CONTRADICTS BIDEN OVER HIS STAND ON TAIWAN

The only plausible theory I could devise was a good cop/bad cop routine: Biden sends a message by saying what he really thinks, and his lieutenants calm the bureaucracy and foreign leaders by restating the “official” policy.

Now NBC reports that Biden is ticked off about the process:

“The so-called clean-up campaign, he has told advisers, undermines him and smothers the authenticity that fueled his rise. Worse, it feeds a Republican talking point that he’s not fully in command.”

U.S. President Joe Biden delivers remarks from the Roosevelt Room of the White House on the mass shooting at a Texas elementary school on May 24, 2022 in Washington, DC.
(Anna Moneymaker/Getty Images)

After the Putin walkback, “Biden was furious that his remarks were being seen as unreliable, arguing that he speaks genuinely and reminding his staff that he’s the one who is president.”

SUBSCRIBE TO HOWIE’S MEDIA BUZZMETER PODCAST, A RIFF ON THE DAY’S HOTTEST STORIES

After a year and a half, do his subordinates really need a reminder?

As if to underscore the point about mixed messages, the White House communications office put out a statement ripping the “breathless” NBC story: ”As we’ve said before, no clarifications of the president’s remarks are ever issued without his direct approval.”

With mounting problems from inflation to Ukraine to baby formula, the embattled White House needs to be operating at maximum efficiency. That’s clearly not happening now.

When it comes to guns, Biden has provided his own reality check, citing constitutional limits on his authority: ”I can’t outlaw a weapon. I can’t change the background checks.”

Whether a deeply divided Washington can do it after these heart-rending massacres remains an open question.