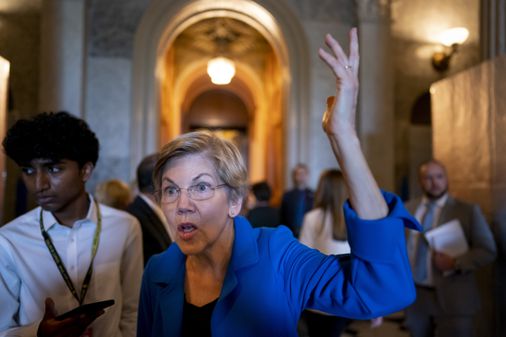 WASHINGTON — In the wake of yet another mass shooting, this time one that killed at least 19 children at a Texas elementary school, the Senate on Wednesday appeared poised to do what it has reliably done for years as the tragedies continue to mount — nothing.

There was plenty of talk about the senselessness of the massacre, the need to find ways to prevent future tragedies, and what Democratic Senate majority leader Chuck Schumer called the “very slim” chance of achieving some bipartisan compromise. But with what appeared to be still-solid Republican resistance to any sort of gun safety legislation, senators prepared to leave for their Memorial Day recess with little prospect of reaching a deal to expand background checks.

“We are caught in the most perverse version of ‘Groundhog Day,’ where we are literally seeing this over and over again and nothing changes,” said Senator Cory Booker, a New Jersey Democrat.

As flags flew at half-staff across the city, less than two weeks after an alleged white supremacist killed 10 people in a Buffalo grocery store, Democratic senators expressed frustration with their Republican colleagues — at least 10 of whom would need to sign on to any gun reform for it to pass. Schumer declined to immediately push for a vote on two House-passed bills that would expand gun background checks, to allow time for senators to restart gun safety negotiations that have failed in the past.

“The bottom line is if this doesn’t move you, nothing will,” Senator Joe Manchin, a West Virginia Democrat who has been working for years to find a compromise on background checks, said of the Texas shooting. Senators Chris Murphy, a Connecticut Democrat, and Susan Collins, a Maine Republican, said they were discussing a possible federal “red flag” law to keep guns out of the hands of people who are judged to pose a threat to themselves or others.

But while some Senate Republicans expressed possible support for that legislation — at least 19 states, including some led by Republicans, have enacted such laws in recent years — others made the puzzling argument that restricting guns in any way would have no effect on mass shootings.

“We already make it illegal to have guns in schools . . . the atrocity itself, murder, is illegal,” said Senator Mike Rounds, a South Dakota Republican. “Congress has tried for years to do different things, but in each particular case, if someone wants to violate a law, they’re going to violate a law.”

Asked if he would be willing to tell the Uvalde parents that the right of an 18-year-old to own an assault weapon is more important than the right of their children to be safe in school, Senator Tommy Tuberville, an Alabama Republican, pushed back.

“I’m willing to say that I’m very sorry it happened, but guns are not the problem, people are the problem,” he said, citing mental health issues he’s witnessed in his career in education. “We’ve had guns forever and we’re going to continue to have guns.”

Some Democrats seethed Wednesday that Republican opposition has prevented Congress from passing gun safety legislation in the decade since 20 children and six adults were killed at Sandy Hook Elementary School in Newtown, Conn. The shooting Tuesday at Robb Elementary School in Uvalde, Texas, which also killed two adults, was the deadliest school shooting since then, and it came only 10 days after a gunman killed 10 Black people in a racially motivated attack at a Buffalo supermarket.

“It’s enormous, my level of frustration, just enormous,” said Senator Dianne Feinstein, a California Democrat who has been working to reinstate a ban on assault weapons that she helped push through Congress in 1994 but that expired 10 years later. Senator Mark Kelly, an Arizona Democrat, was less diplomatic.

“It’s [expletive] nuts to do nothing about this,” said Kelly, whose wife, former representative Gabrielle Giffords, was seriously injured in a 2012 assassination attempt during which six people were killed.

Senator Elizabeth Warren said lawmakers were abdicating their duty by not acting immediately to try to stop future mass shootings.

“This is one of the basic functions of government, keeping people safe,” the Massachusetts Democrat said. “And I get it, we’ll never be able to keep everyone 100 percent safe. But we can do better for our babies than we are doing right now.”

Speaking at the White House, President Biden said he was “sick and tired” of inaction and urged Congress to do something, echoing the plea he made in a somber speech to the nation on Tuesday night.

“Where’s the backbone? Where is the courage to stand up to a very powerful lobby?” he said at a signing ceremony for an executive order on policing, referring to the National Rifle Association and other gun rights lobbying groups. Texas Senator Ted Cruz, a Texas Republican, and former president Donald Trump are scheduled to attend the NRA’s annual meeting in Houston this weekend.

Biden said reforms such as expanding background checks would not prevent every mass shooting but would help curb them, and argued that the Second Amendment does not guarantee an “absolute” right to own any kind of weapon. “The idea that an 18-year-old can walk into a store and buy weapons of war designed and marketed to kill is I think just wrong,” he said.

Biden, who said he plans to travel to Uvalde in the coming days, also told the Senate to confirm his pick to lead the Bureau of Alcohol, Tobacco, Firearms and Explosives. The agency has rarely had a Senate-confirmed director in the past 15 years amid Republican hostility to its mission.

Schumer took a procedural step Tuesday night to bring up the House-passed bills, one that would extend the background check review period and another that would close the gun show loophole and apply background checks to purchases at gun shows or online.

But he declined to keep the Senate in session beyond Thursday to force votes on the legislation before the recess. Democrats know they lack the 10 Republican votes needed to overcome a GOP filibuster. But some senators, like Warren, want to hold the votes anyway to force Republicans to vote against them.

Other liberals renewed their calls for Democrats to eliminate the filibuster to pass reforms. Manchin reiterated Wednesday that he opposed such a move, arguing it would make it easier for a future Republican majority to repeal any gun safety measures. A Politico/Morning Consult poll released Wednesday in the wake of the Buffalo shooting found that 59 percent of registered voters said it’s important for elected leaders to pass stricter gun control laws.

“I believe that accountability votes are important. But sadly, this isn’t a case of the American people not knowing where their senators stand,” Schumer said Wednesday in a speech in which he used the word “damn” four times. “They know. They know because my Republican colleagues are perfectly clear on this issue. Crystal clear.”

But Schumer said he would allow gun safety amendments on a domestic terrorism bill the Senate will consider Thursday in the aftermath of the Buffalo shooting and said he hoped Republicans would support them.

“The American people are tired of moments of silence,” Schumer said, “tired of the kind words offering thoughts and prayers.”