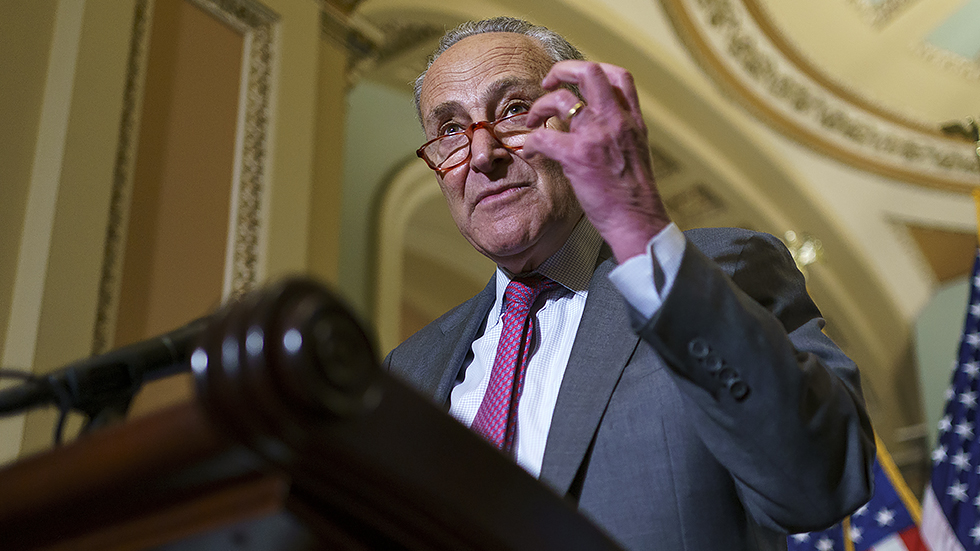 Senate Majority Leader Charles Schumer (D-N.Y.) is telling colleagues that they will have the opportunity to vote on amendments to curb gun-related violence if Republicans agree to a debate on a domestic terrorism bill, which passed the House on a party-line vote.

Schumer made his comments about possible votes on gun control and gun-related violence proposals after announcing earlier in the day that he had no plans to bring gun control measures to the Senate floor in the immediate aftermath of mass shootings in Buffalo and Uvalde, Texas.

“I urge all my Republican colleagues to vote to get on that bill. All we’re asking is a vote ‘yes’ on the motion to proceed,” he said Wednesday afternoon, referring to the Domestic Terrorism Prevention Act, which only one Republican voted in favor of in the House.

“If Republicans can vote with us to get on that bill, we can have a debate on considering common-sense, strong gun safety amendments, hopefully with bipartisan support,” he said. “Let me be clear: we are going to vote on gun legislation, and the Republicans could let us start doing that as soon as tomorrow, if they simply voted yes on the motion to proceed.”

Senate Republicans have already said they will block the bill, which they characterize as an overreach of federal authority.

“It’s like the disinformation board on steroids. Another way to look at is the Patriot Act for American citizens,” Sen. Josh Hawley (R-Mo.), told The Hill last week, comparing the domestic terrorism bill to the law passed after Sept. 11, 2001,, to expand the government’s power to monitor phone and email records.

Schumer pledged to allow gun violence-related amendments on the domestic terrorism bill after he objected to a request by Sen. Ron Johnson (R-Wis.) for unanimous consent to advance a proposal to “harden” schools from potential attack.

Johnson asked for unanimous consent to pass the Luke and Alex School Safety Act, which previously passed out of the Senate Homeland Security Committee unanimously. It would create a clearinghouse on information of the best practices for school safety.

Schumer responded the legislation could be considered if Republicans agree to debate on domestic terrorism.

“I would tell my colleague from Wisconsin, tomorrow we can begin voting on a bill that will let us take action on guns, and we could consider amendments like this then, along with others,” Schumer said.

But the offer didn’t sit well with Johnson.

“It is just sad that this body can’t pass this bill when about a month ago, they passed an identical bill that applied to churches. This one applies to schools, and yet it’s inappropriate, according to the majority leader, to pass this nonpartisan bill by unanimous consent,” the Wisconsin Republican responded.