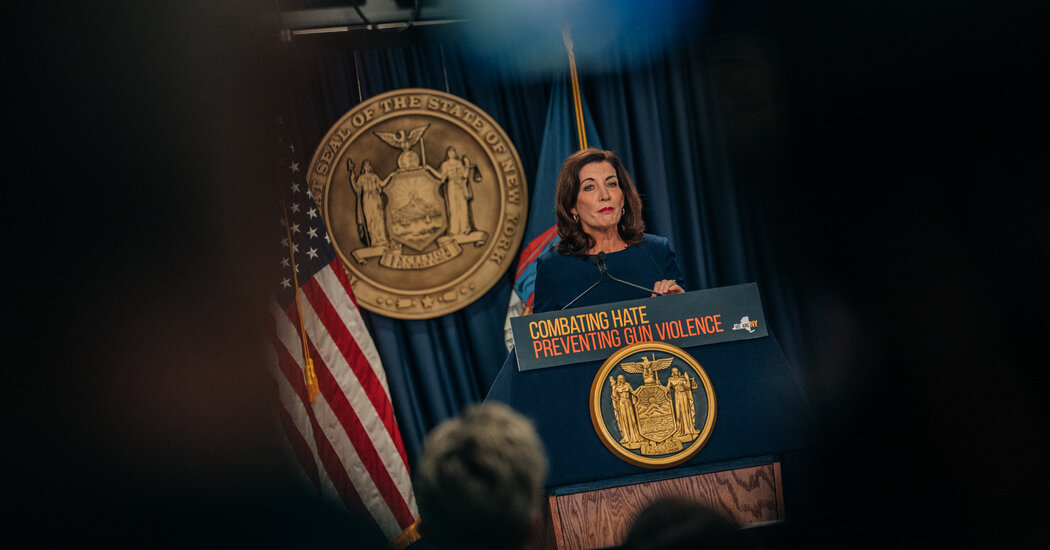 With the June 28 primary fast approaching, candidates for governor are spending big to get their message out to voters.

An Army veteran. A bartender’s son. A hard-working executive, burning the midnight oil.

These are just a few of the ways in which candidates vying to be New York’s next governor have introduced themselves to voters in a barrage of campaign advertisements before the June 28 primaries.

In the Covid era where in-person campaigning still remains fraught, political ads offer candidates an opportunity to speak directly to voters, showcasing their qualifications and vision for the future.

Four of the candidates for governor have spent a combined $19.8 million on television ads: Gov. Kathy Hochul and Representative Thomas Suozzi, both Democrats, and Representative Lee Zeldin and Harry Wilson on the Republican side. Other candidates, including the New York City public advocate, Jumaane Williams, a left-leaning Democrat, and Andrew Giuliani, a pro-Trump conservative, have not yet purchased ads on television, according to AdImpact, a firm that tracks television ad spending.

There has, however, been some major ad spending on behalf of a familiar noncandidate, who is at least as of now not running for governor — former governor Andrew M. Cuomo.

Ms. Hochul’s first television ad shows the governor late at night at her desk in her Albany office, portraying her as an executive who has worked tirelessly since ascending to the governorship following the unexpected resignation of Mr. Cuomo in August.

What the 30-second spot does not show is how Ms. Hochul has also worked tirelessly to raise campaign funds.

The governor, who as of January had amassed a record-smashing $21.6 million campaign war chest, has so far spent more than $6.8 million in ad buys, according to AdImpact. Most of the spending, not surprisingly, has been focused on New York City and its suburbs, where most Democratic primary voters live.

Wielding the power of incumbency, Ms. Hochul utilized her first ad to highlight some of the voter-friendly policy priorities she negotiated with lawmakers as part of the state budget in April. The ad underscores her efforts to confront some of the biggest election-year issues — crime and skyrocketing prices — by touting measures to crack down on illegal guns and cut taxes for the middle class.

Ms. Hochul released a second television ad last week focused on her commitment to protect abortion rights in New York, shortly after news broke that the Supreme Court was likely to overturn Roe v. Wade, the landmark decision that legalized abortion across the country in 1973.

Similar to other Democratic campaigns nationwide, Ms. Hochul’s operatives are hoping to wield the issue against Republicans — the ad accuses two of her Republican rivals of wanting to ban abortion — and to galvanize Democratic voters in November, when control of Congress will also be in play.

Suozzi focuses on crime and taxes

Mr. Suozzi, a centrist Democrat from Long Island, has used his campaign ads to cast himself as the “common-sense” candidate and to attack Ms. Hochul. Some of the ads blame her for failing to address rising gun violence, chiding her for an endorsement she received from the National Rifle Association during her time in Congress.

Mr. Suozzi has focused most of his ads on his promise to lower income and property taxes and to further roll back the changes to the state’s bail laws that the Democrat-led Legislature passed in 2019.

Mr. Suozzi has repeatedly blamed bail reform for leading to the release of more criminals. He has accused the governor of not doing enough to fix what he sees as deficiencies in the bail laws, even though Ms. Hochul recently persuaded lawmakers to approve some changes.

Mr. Suozzi, who trails Ms. Hochul in public polls, faces an uphill battle: The Democratic primary tends to attract the party’s most liberal voters, but he is running as an unabashed moderate unafraid of taking on the party’s vocal left wing.

“It’s not about being politically correct, it’s about doing the correct thing for the people of New York,” he says in one ad, which the campaign named, “No B.S.”

Mr. Suozzi, who had about $5.4 million in the bank as of earlier this year, has poured just over $3.9 million into television ad buys.

He began spending on television ads as early as January, far before Ms. Hochul, but his campaign has not made ad buys in the most recent weeks of May, according to AdImpact.

A representative from Mr. Suozzi’s campaign said that it had halted buying because of some uncertainty around the date of the primary, but planned to soon resume.

Zeldin goes negative on Hochul and state of New York

Mr. Zeldin’s television ads have consistently sought to link Ms. Hochul to the ills that his campaign argues have befallen New York because of Democratic rule, a recurring theme as he seeks to become the state’s first Republican governor in 16 years.

Anchored on a pledge to “Save Our State,” Mr. Zeldin’s ads home in heavily on crime — they rail against bail reform and the defund the police movement — as well as the state’s high taxes and population loss.

They also seek to tie Ms. Hochul, who served as Mr. Cuomo’s lieutenant governor for six years, to the scandals that led to his resignation (one calls her a “silent accomplice”). His campaign’s most recent television ad is focused exclusively on the arrest in May of Ms. Hochul’s former lieutenant governor, Brian Benjamin, on federal bribery charges.

Mr. Zeldin, who is the Republican Party’s designee in the race, has used the ads to tout his own credentials as a military veteran and as a “tax-fighting, trusted conservative.”

They make no mention of his staunch support for former President Donald J. Trump, who remains largely unpopular in his home state, where registered Democrats outnumber Republicans two to one. Mr. Zeldin voted against certifying last year’s presidential election in January 2021, a move Democrats have used as a cudgel against him.

Of the more than $5 million in campaign money Mr. Zeldin had as of January, about $3.9 million has been steered into television ads.

While Mr. Zeldin has spent almost $1.5 million in the New York City area, the majority of his television ad spending has gone outside the downstate region, targeting the state’s conservative voters.

Mr. Wilson, a businessman who has run for state office before, nonetheless entered the race largely unknown to voters. But he’s hoping that a slate of ad buys stretching from February to June will change that.

Mr. Wilson, who is reported to be largely self-funding his campaign, has spent more than $5.2 million, according to AdImpact, outspending Mr. Zeldin, who is widely seen as the front-runner on the Republican side.

Mr. Wilson ran a well-regarded campaign for comptroller in 2010 that captured the support of three major editorial boards, but he lost narrowly to the Democratic nominee, Thomas P. DiNapoli. He also contemplated running for governor four years ago, but decided against it.

Mr. Wilson hopes that his record coaching troubled companies and center-right social views will appeal to moderate voters looking for a change.

His ads focus on bureaucratic inefficiency, rising costs and population losses that Mr. Wilson blames on “corrupt go-along to get-along politicians.” Like some of his competitors, he promises to lower taxes and add police officers. But he also pitches himself as a fiscally conscious political outsider, with the perspective and experience to turn around a failing state.

“I’m running for governor because I cannot sit by and watch as New York is devastated by career politicians,” he says in one ad.

Cuomo to New York: Don’t you forget about me

Though he is not an official candidate for any office, the former governor has also run two ads — spending $2.8 million out of the campaign fund he left office with, according to AdImpact.

The ads seek to restore Mr. Cuomo’s image after his resignation last year amid allegations of sexual harassment and to reframe him as the victim of political attacks.

Mr. Cuomo ran the ads from late February until late March, heightening speculation that he might jump into the race, but hasn’t made any ad buys since then.

Mr. Cuomo has denied any inappropriate behavior, and five district attorneys declined to prosecute claims against him after opening inquiries. However, the New York State attorney general, Letitia James, State Assembly investigators and many of those same district attorneys found Mr. Cuomo’s accusers to be credible.

One 30-second advertisement begins with a smattering of newspaper headlines memorializing the closure of several investigations into sexual harassment and assault allegations, concluding that “political attacks won, and New Yorkers lost a proven leader.”

The other seeks to remind New Yorkers of Mr. Cuomo’s achievements in office, citing the state’s gun laws, the $15 minimum wage and major airport and bridge projects.

“I never stopped fighting for New Yorkers, and I never will,” he says.