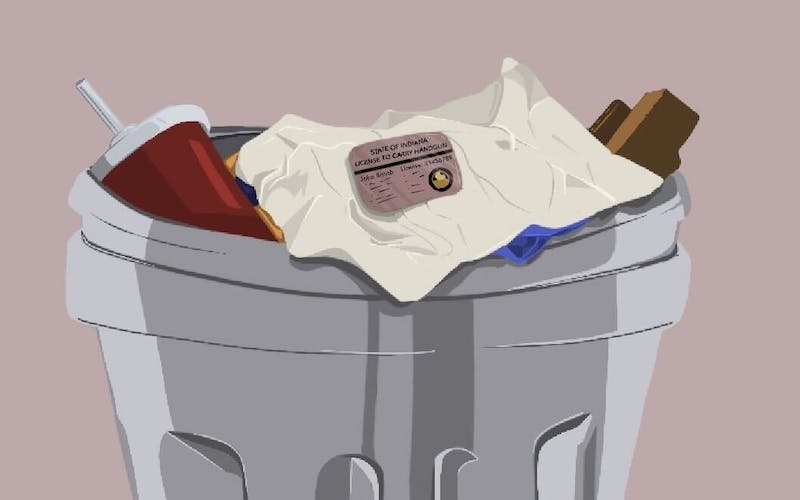 On Jan. 12, the Indiana House of Representatives referred House Bill 1077 to the Indiana State Senate for consideration.

The bill repeals the law that requires a person to obtain a license to carry a handgun in Indiana.

Paul Helmke, professor of practice at IU, said the bill allows more people to carry loaded guns in public without any training or background in the risks and responsibilities of carrying a gun in public.

“When you own a gun, and it’s in your house, that’s one thing. You’re only a danger to yourself and your family members,” Helmke said.

Helmke said the bill means Indiana is more likely to see people carrying loaded guns around with them and while he believes IU would still have the right to ban guns on campus, guns, he said, could be present at other places like at bars or on Kirkwood Avenue.

“It’s basically saying it’s encouraging more people to carry more loaded guns into public spaces than we had before,” Helmke said. “All because it’s too long to wait two weeks for a lifetime permit.”

According to a press release from Indiana House Representative Ben Smaltz, the bill is a big win because it cuts government red-tape, which according to Merriam-Webster is an excessively complex procedure which results in delay or inaction, for law-abiding Hoosier gun owners.

“As lawmakers, we need to do what’s necessary to protect our Second Amendment rights,” Smaltz said in the release. “That means getting this legislation across the finish line. It’s my hope the Senate considers and acts on this important bill this session.”

IU junior Anna Ferguson, president of March for Our Lives Indiana, said a lot of arguments in favor of loosening gun laws state if criminals want a gun, they will get it. However, getting a gun, for things like self-harm or domestic violence, is often an impulsive action, Ferguson said.

“But if they were forced to stop and wait, they might not get something that gives them a lot of power to be very dangerous,” Ferguson said.

“So with safety in particular, it’s not just shooting others, but also I could see the rate of death by suicide going up with this.” Ferguson said.

One interesting thing about this legislation, Ferguson said, is when it was passed in the House last year, the main opposition came from the police.

“Both the union and the Indiana State Police said it would make it a lot harder to enforce gun law,” Ferguson said. “Just because you wouldn’t have to have that paperwork on the record.”

One thing police can check when they perform a traffic stop, serve summons to a house or have contact with the public, Helmke said, is if the person has a permit to carry.

“Now, if we get rid of that, then you know there’s nothing that the police can check ahead of time to see if someone’s got a gun permit or not,” Helmke said.

The National Rifle Association Institute for Legal Action has also spoken in support of the bill stating it ensures citizens have the right to self-defense without government permission, according to a press release.

The bill creates the crime of “unlawful carrying of a handgun,” prohibits certain individuals, including those who’ve been convicted of a federal or state offense punishable by a term of imprisonment exceeding one year, among others, from knowingly carrying a handgun and makes the theft of a firearm a level 5 felony.