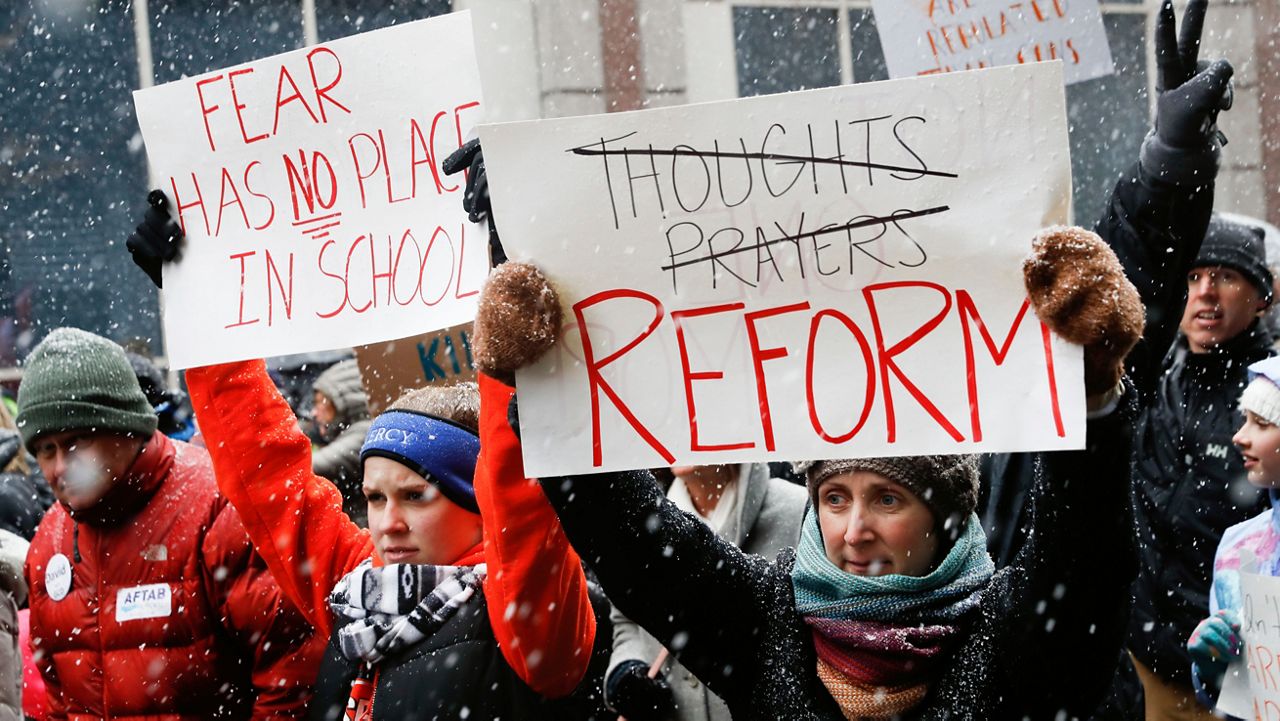 On the four year anniversary of the deadly shooting at Marjory Stoneman Douglas High School in Parkland, Florida, President Joe Biden on Monday urged Congress to take action in order to reduce gun violence in this country.

“We can never bring back those we’ve lost,” Biden said of the 17 victims of the deadly school shooting — 14 students and three staff members. “But we can come together to fulfill the first responsibility of our government and our democracy: to keep each other safe.”

“For Parkland, for all those we’ve lost, and for all those left behind, it is time to uphold that solemn obligation,” Biden added.

“On this difficult day, we mourn with the Parkland families whose lives were upended in an instant; who had to bury a piece of their soul deep in the earth,” Biden wrote. “We pray too for those still grappling with wounds both visible and invisible. And, as we remember those lost in Parkland, we also stand with Americans in every corner of our country who have lost loved ones to gun violence or had their lives forever altered by a shooting, in tragedies that made headlines and in ones that did not.”

Biden called on Congress to “pass a budget that provides an additional half billion dollars for proven strategies we know reduce violent crime,” as well as increase funding for the Bureau of Alcohol, Tobacco, Firearms and Explosives and the U.S. Marshals.

He also asked Congress to “do much more,” including “requiring background checks on all gun sales, banning assault weapons and high-capacity magazines and eliminating immunity for gun manufacturers.”

“Out of the heartbreak of Parkland a new generation of Americans all across the country marched for our lives and towards a better, safer America for us all,” Biden said. “Together, this extraordinary movement is making sure that the voices of victims and survivors and responsible gun owners are louder than the voices of gun manufacturers and the National Rifle Association.”

The shooting spurred a national movement — Never Again MSD, organized by now-former Marjory Stoneman Douglas High School students. They went on to organize March for Our Lives, a march on Washington, D.C., which became one of the largest protests in U.S. history.

But since Parkland, gun violence at schools has only increased. According to Everytown for Gun Safety, a gun control advocacy group, there were at least 136 instances of gunfire on school grounds between Aug. 1 and Dec. 31.

And despite the groundswell of support, gun control legislation has been all but a non-starter in Congress, with little-to-no appetite for reform from most Republicans.

Murphy argued that while the legislation would not be able to prevent “every single shooting,” expanding background checks “saves lives, decreases gun violence and decreases violent crime.”

But Grassley countered by arguing the bill is “hostile towards lawful gun owners and lawful firearm transactions” and claimed that “so-called universal background checks will not prevent crime and will turn otherwise law-abiding citizens into criminals.”

The effort, like others in the aftermath of similar tragedies — including Parkland and the 2012 shooting at Sandy Hook Elementary School in Newtown, Connecticut — has languished in the Senate.

Biden was even forced to withdraw his nominee to lead the Bureau of Alcohol, Tobacco, Firearms and Explosives last year after his pick ran into opposition; the crucial but politically fraught department has only had one full-time, confirmed leader since 2006.

But the Biden Administration has taken action to address gun violence, including cracking down on so-called “ghost guns,” homemade firearms without serial numbers. He also worked to tighten regulations on pistol-stabilizing braces.

Last year, the Justice Department established law enforcement strike forces to focus on guns heading into five cities, including NYC, via the so-called “Iron Pipeline” along I-95 up the East Coast. They have already launched 540 investigations, and seized nearly 3,100 weapons, according to a White House fact sheet.

But advocates have called on the president to do more to address gun violence.

“Frankly, President Biden needs to do something,” David Hogg, a survivor of the Parkland shooting and founder of March For Our Lives, told CNN on Monday. “Because there are certain things that he’s leaving on the table that he can do right now, like creating a national office of gun violence prevention and a national director of gun violence prevention and creating a comprehensive plan to dramatically reduce Gun Deaths before the State of the Union that he can do right now regardless of the filibuster and regardless of what’s going on in the Senate.”

“Biden has been a friend but not a leader,” Hogg added. “He’s made small steps but it’s not enough. The president hasn’t been receptive to our demands. We expected this from Trump, but we’re shocked that it’s coming from Biden.”

“We’re not asking for magical things,” Igor Volsky, founder of Guns Down America, told CNN. “This is the bare minimum for what a champion of gun violence prevention should be doing, and thus far the President hasn’t.”

“We need you to go out and act right now before the next Parkland happens,” Hogg said to Biden on CNN. “Because there are things that you can do right now to help prevent it that you have not done. We need you to make good on your promises, because kids are dying.”