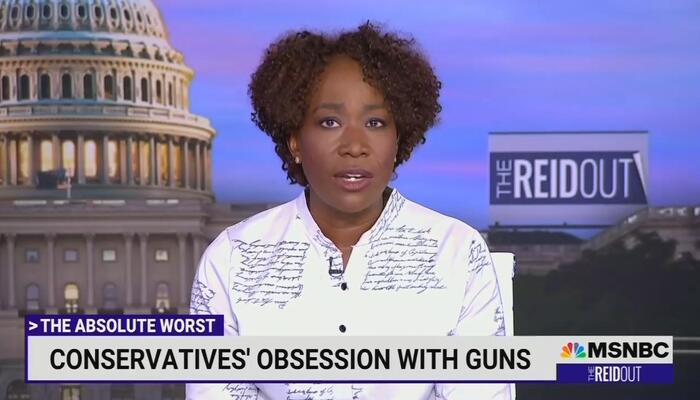 Reid began her discussion with a brief description of the recent mass shooting in San Jose. She immediately employed typical liberal rhetoric when she described gun violence as a “gruesome epidemic that continues with no signs of stopping or slowing down.” She quickly blamed the gun-fetishising Republicans in states such as Texas for the lack of change.

Painting an inaccurate picture of a recent Texas bill that ends the requirement for Texas residents to obtain a license to carry handguns, Reid told her audience that this bill allows anyone off the street to walk around with an unlicensed handgun and claimed it was a further example of Republicans’ “obsession with pushing more guns into more American hands including the hands of mass shooters.”

In reality, the final version of the bill includes an amendment which expands the list of individuals prohibited to carry to include individuals who have been convicted of certain Class A and B misdemeanors within the last 5 years. These misdemeanors include crimes of assault causing bodily injury, deadly conduct, or terroristic threats. A detailed description of this provision can be found in Section 22 of House bill 1927. It seems that the liberal media failed to study the details of this amendment and instead focused on using deceptive fearmongering to further their causes.

More specifically, she ranted that Senator John Kennedy’s recent video for the National Rifle Association was stupid and did nothing other than promote guns and poor spelling. Despite her claim that she was not triggered by the video itself, Reid proclaimed that she was “triggered by the continual death that we know is coming because of people like you and your friends who are pushing laws that let any untrained idiot off the street walk around with an unlicensed handgun that they might not even know how to properly use, and let’s just hope and pray not kill a bunch of people with it.”

In a typical leftist fashion, Reid smeared Republicans as anti-democratic gun nuts, and ended by declaring their “fetish” to be absolute worst. However, what is anti-democratic about promoting an individual right to keep and bear arms that is found in the Constitution? For Reid and the liberal media, anything that doesn’t support their agenda and narratives is “anti-democratic.”

This story was brought to you by BMW and Credit Karma. Their contact information is linked.

Below is a transcript of the segment, click expand to read:

JOY REID: It’s a gruesome epidemic that continues with no signs of stopping or even slowing down. According to the Gun Violence Archive, there have been 232 mass shootings so far this year, including today’s incident which was the 62nd in May alone. Today’s shooting leaves another community asking again, as we do every time, when will this insanity stop? Unfortunately, because of the gun-fetishising Republicans running so many statehouses, clearly not any time soon.

Just look at Texas, on Monday, lawmakers there approved a bill allowing anyone 21 and older to carry a handgun without a license or training or a state background check. And Governor Greg Abbott says he will sign it. Texas would join 20 other states with so-called permitless carry laws and would be the largest guns-everywhere state by far. Texas already has some of the least restrictive gun laws in the country. You can already open carry a rifle, which an AR-15 happens to be. Abbott also bragged that he has signed a resolution naming an official state handgun and would sign more gun laws real soon because that’s the priority for the Republican governor and legislators who have now made it harder for adults in Texas to cast a ballot than to carry a handgun.

Of course, the anti-democracy, second amendment fetishists in Congress are all for it. Pretend tough guy Ted Cruz applauded Texas legislators for passing it. While noted gun fanatic and Q-anon Barbie Margie Greene gushed that she’d love to see a similar law back home in already guns everywhere in Georgia. Of course, those two are far from the only Republicans pushing their obsession with pushing more guns into more American hands including the hands of mass shooters by the way.

But the most bizarre and disturbing example of a willingness to shill for the now Texas-based and financially and morally bankrupt National Rifle Association’s agenda, comes from Louisiana Republican senator, John Kennedy, whose new video the NRA said would “trigger the libs.”

SEN. JOHN KENNEDY [R-LA]:  I believe that love is the answer, but you ought to own a handgun just in case.

REID:  Well, Senator Kennedy, yeah, we’re triggered, and not by your stupid video, which basically promotes guns as a stand-in for having a love interest and poor spelling. We’re triggered by the continual death that we know is coming because of people like you and your friends who are pushing laws that let any untrained idiot off the street walk around with an unlicensed handgun that they might not even know how to properly use, and let’s just hope and pray not kill a bunch of people with it. And for that, the Republicans’ obsession with fetishising firearms are the absolute worst.