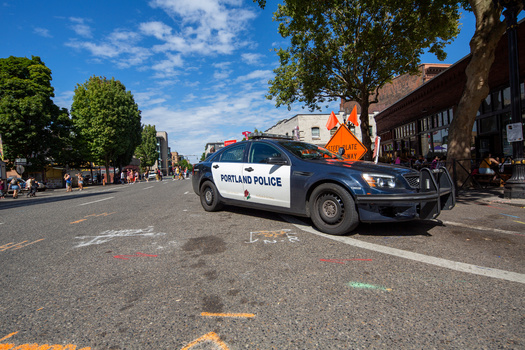 Community members continue to voice concerns about gunshot-detecting technology being considered in Portland.

At a recent Inter-Faith Peace and Action Collaborative meeting, opponents of the technology known as ShotSpotter pointed out its weaknesses.

Jonathan Manes, attorney at the MacArthur Justice Center in Chicago, where the ShotSpotter surveillance system has been implemented, said there are no published studies about how the technology responds to loud noises, and notes every time it is triggered, police are expecting to find someone armed and potentially dangerous.

“To the extent that the system is being triggered by loud noises — like fireworks, cars backfiring, etc. — it’s creating unnecessary, dangerous situations, and putting people under false suspicion,” Manes contended.

Supporters of the ShotSpotter program said it is necessary to address the growing number of gun deaths in Portland. But a 2021 study from the MacArthur Justice Center found it led to more than 40,000 dead-end police deployments in Chicago in less than two years. A ShotSpotter spokesperson says the report draws erroneous conclusions from its interpretation of police reports.

Je Amaechi, digital organizer for Portland-based Freedom to Thrive, who also spoke at the Inter-Faith meeting, said a more equitable response to gun violence would be to help lift people out of poverty.

“Spending thousands of dollars, and even millions on a system that primes police to see underserved people in a particular region as armed assailants – that is not an equitable use of data, in any kind of way,” Amaechi asserted. “And the idea that it could be an equitable data – I mean, it escapes reason.”

The ShotSpotter contract with Portland could be worth up to $1 million a year.

Sarah Hamid, campaign director for the Carceral Tech Resistance Network in Portland, spoke at the meeting as well. She said there are racial disparities in how the ShotSpotter technology has been implemented in other cities.

“So, when we think about why it is that people are starting to feel that technology is racist, it might just be because old racisms are being recuperated through scientific language,” Hamid contended.

Portland Mayor Ted Wheeler’s office is developing a proposal for the city council on ShotSpotter, but has not yet established a timeline for when it would be introduced.

Disclosure: Freedom to Thrive contributes to our fund for reporting on Criminal Justice, Immigrant Issues, LGBTQIA Issues, and Social Justice. If you would like to help support news in the public interest, click here.