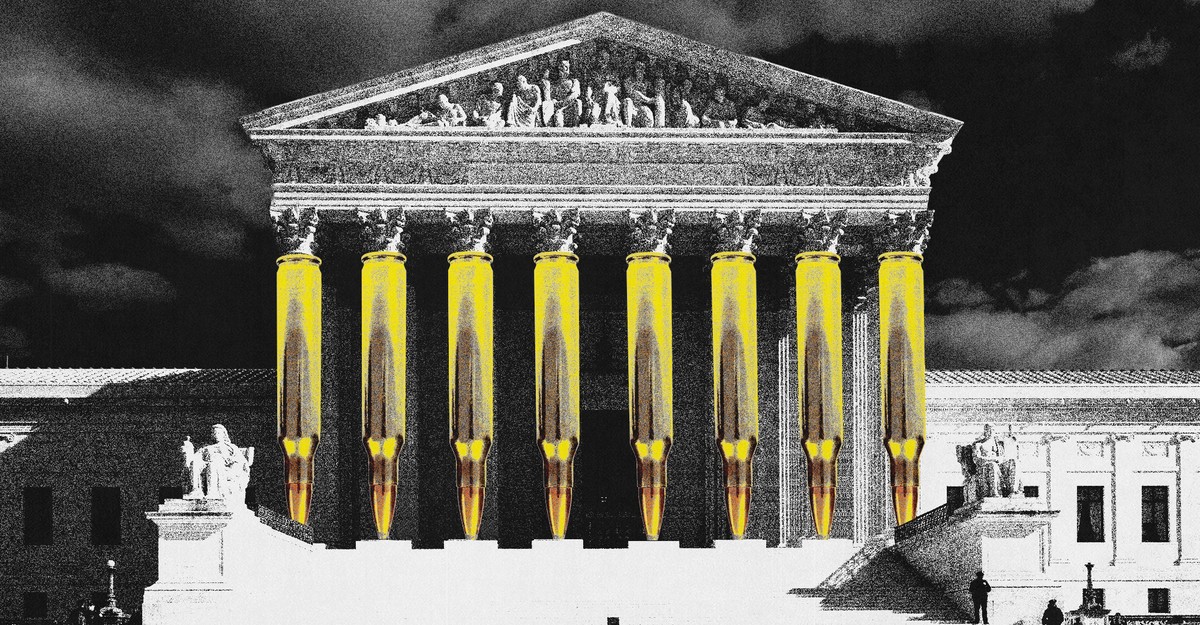 Since the horrific murders at Sandy Hook Elementary a decade ago, America has seen hundreds more mass shootings, a sharp rise in gun deaths generally, and an alarming turn toward gun-glorifying political extremism. Yet we still depend on hundreds of laws that keep guns out of crowded public places, stop teenagers from buying handguns, and prohibit criminals from arming themselves with assault rifles. Now, because of a recent Supreme Court ruling, many of these remaining regulations are in danger of being dismantled. As bad as America’s gun-violence problem is, it could be about to get much worse.

Less than two years after the appointment of President Donald Trump’s third pick for the U.S. Supreme Court created a 6–3 conservative supermajority, Justice Clarence Thomas wrote the majority opinion in the case New York State Rifle & Pistol Association, Inc. v. Bruen. The Court could have issued a narrow decision and directed New York to be more lenient in issuing concealed-carry permits. But as in the Dobbs v. Jackson decision on abortion, which came a day after Bruen this year, the conservative majority seized an opportunity not to adjust precedent incrementally, but to destroy it completely.

For public safety and gun policy, the Bruen opinion is proving nothing short of seismic. Even as the nation struggles with yet another series of mass shootings, courts across the country are rushing to deal with a spate of lawsuits and motions that will create regulatory chaos over firearms. Many of these cases are tailored to produce appeals that may ultimately go up to a Supreme Court predisposed to the broadest possible interpretations of Second Amendment rights.

In the Bruen opinion, Thomas made clear that, henceforth, the Court’s conservative majority would judge all firearms regulations by a new originalist standard: If there is no historical proof of a gun law linked to 1791 or 1868—the years when the Second and Fourteenth Amendments, respectively, were ratified—then any modern law restricting firearms is liable to be ruled unconstitutional. Never mind that any teenager with a modern AR-15 rifle can fire several times every second, whereas a well-trained 18th-century soldier could fire a musket, at best, three or four times a minute.

An effect of the Thomas opinion is to press judges in lower courts into serving as historians and archival researchers. To decide new gun cases, they must go searching for precedents among incomplete or nonexistent records, some of which are centuries old and difficult to decipher. The results are likely to shock Americans who rely on long-established public-safety laws to protect children in schools and citizens who gather in churches or attend sports events and the like. Instead of making it more difficult for a troubled 18-year-old to become a deadly mass shooter, this Court has made it much easier—all in the cause of empowering an unrepresentative, radical pro-gun minority of Americans whose vocal demands about their right to bear arms have found sympathetic ears on the Supreme Court.

Several cases already give us a glimpse of the future under Bruen. In West Virginia, a judge recently ruled unconstitutional the federal law that mandates serial numbers on guns, because he can find no evidence of a statute requiring firearms to carry a serial number dating to 1791. If that judge’s decision is upheld, police detectives will find it almost impossible to solve gun crimes, because serial-number records are the basis for most such investigations.

In Texas, a judge just struck down the prohibition of gun ownership by domestic abusers. His reasoning derives from the regrettable truth that spousal abuse was not a criminal offense in the 1700s. This decision is set to undo laws across the nation that have prohibited more than 300,000 gun purchases by abusers—and at a time when recent data show a steep rise in the number of women, including Black women at a disproportionate rate, killed by a male gun owner in their lives.

In New York, in October, a judge ruled that guns must be allowed in places of worship, because he couldn’t find any old laws that prohibited armed parishioners. Laws that regulate magazine capacity in several states are also currently facing challenges, which could mean that no state or municipality could regulate the sale of 30-round, or even 100-round, magazines for any sort of gun, including the AR-15s preferred by mass shooters who desire to inflict as much carnage as they can without having to pause to reload (a moment that makes them vulnerable to citizens fighting back to subdue them).

Another Texas law prohibiting teenagers from carrying handguns was recently struck down because young men alive at the time of our founding faced no such regulation. Similar cases are making their way through other courts, which, if they stand, could not only permit 18-year-olds to buy handguns (the current national law mandates a minimum age of 21), but also imperil hope of imposing a national age restriction on the sale of AR-15 rifles. Meanwhile, in several states other suits are threatening to overturn laws that regulate the sale of those same assault rifles.

Other likely Bruen-induced outcomes include lawsuits to end all background checks, based on the absurd argument that running background checks on gun sales violates the Constitution because no nationwide computerized database of criminal records existed at the country’s founding. That such a lawsuit would not only threaten efforts to close the gun-show loophole but also aim to eliminate the entire background-check system—the same one that has stopped millions of dangerous criminals from purchasing guns—reveals just how far the Bruen decision is moving the needle.

For most Americans, this survey of the post-Bruen lawfare should sound shocking and dangerous. But it’s a dream come true for extremists who place gun rights at the forefront of their culture-warring. They see an opportunity to grasp a wider victory from the way Bruen alters the foundation of a long-accepted balance between individual rights and society’s need to ensure collective safety. This same reordering of values and priorities lies at the heart of efforts to dismantle government influence more generally, including over environmental protections and public-health mandates.

These new attacks are so extreme that even laws supported by the gun industry are coming under threat. Until not so long ago, an overwhelming majority of leaders in the firearms industry, in which I spent more than 25 years as a sales executive, accepted the necessity of regulations like the ones that flowed from the 1939 Supreme Court case U.S. v. Miller, which upheld the 1934 National Firearms Act. That statute severely restricted the sale of sawed-off shotguns, silencers, and fully automatic weapons such as the “tommy guns” used by criminal organizations like Al Capone’s.

Miller thus clarified the balance between individual freedoms and collective safety as a sound constitutional test for all gun laws. This finding led to other bedrock laws such as the federal background-check system, or NICS, which was instituted in 1998. This statute protected citizens by making it harder for criminals to obtain firearms, while also providing reasonable liability protection for responsible gun manufacturers. Up until the late 2000s, most people I knew in the industry approved of laws enabled by the Miller standard that helped prohibit “bad guys” from buying guns.

Unfortunately, for three decades, the industry was also partnering with the National Rifle Association—at a time when the organization was radicalizing a political base that became hell-bent on destroying those laws. The first big victory for this coalition came in 2008 with the Supreme Court’s D.C. v. Heller decision, which reinterpreted the Second Amendment to establish a broader individual right to own a gun for self-defense.

Heller was just the start. While the NRA helped rally opposition to newly elected President Barack Obama, fringe actors and conspiracy-theory-mongers were empowered to make guns a totemic issue for the right. As the NRA’s power grew, judges who hoped for advancement—as far as nomination to the Supreme Court—got the message, and started issuing more radical decisions on gun rights as a way to keep their names at the top of lists of potential nominees.

Brett Kavanaugh, then a federal judge on the D.C. Circuit, illustrated this trend when he wrote a dissent arguing that courts should cease to rely on constitutional tests for gun laws that balanced public safety with Second Amendment rights—the foundation of the Supreme Court’s ruling in Miller. After President Trump announced his pick of Kavanaugh, the NRA’s leader, Wayne LaPierre, was quick to call on members to urge senators to confirm him. The NRA played an equally prominent role in the nomination processes of Trump’s other two justices, spending millions in partnership with the Federalist Society to promote Neil Gorsuch and rallying confirmation votes for Amy Coney Barrett.

The NRA’s political effort helped create the current Supreme Court majority that elevates the rights of gun owners above almost all others. For now, the results are manifesting in the lower courts. How this conservative-dominated high-court bench will ultimately rule on each Bruen-inspired challenge is not certain, but one thing is: Those cases now racing up through the circuits will quickly force the justices to decide whether they were serious about undoing the balance of Miller.