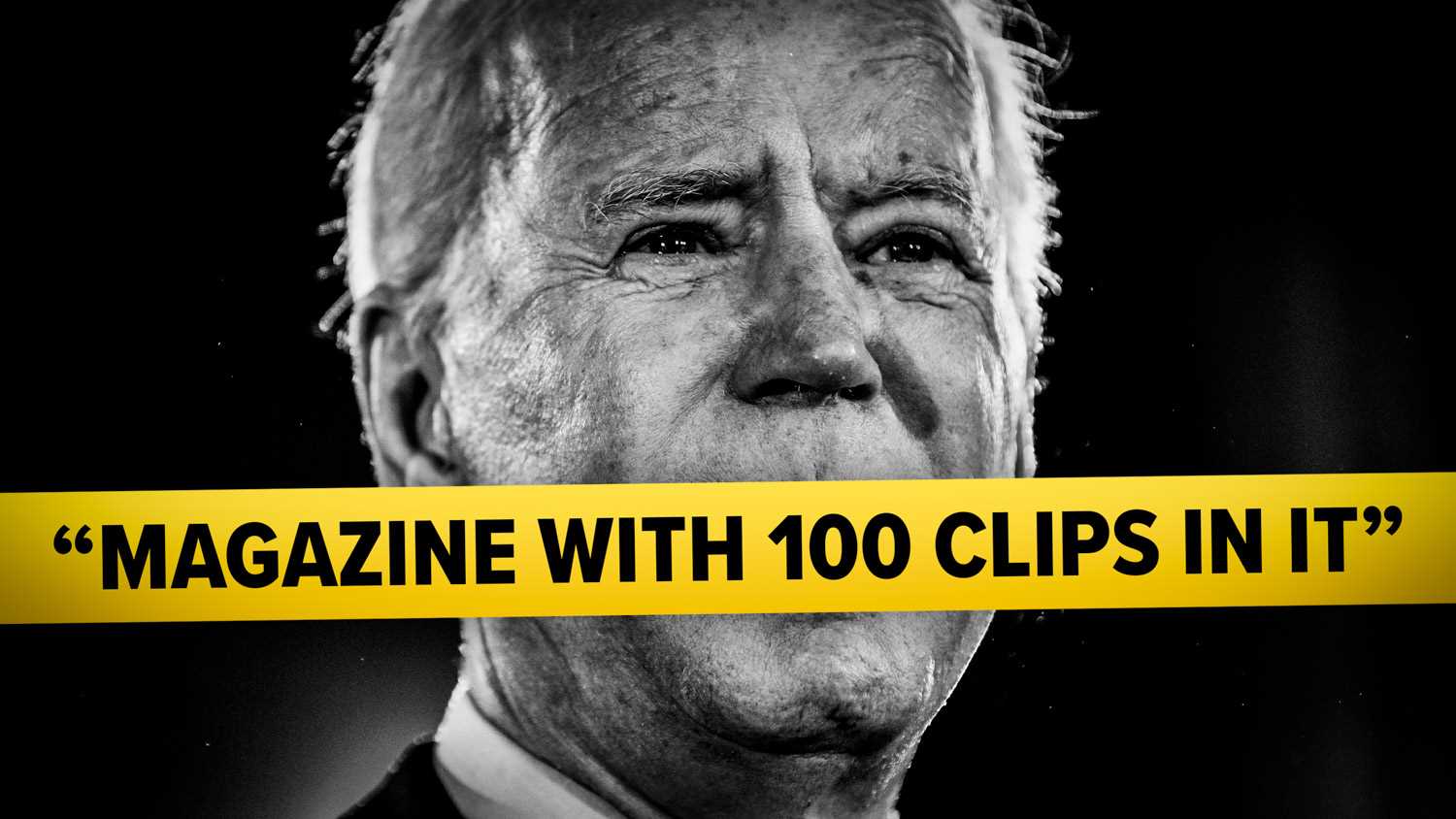 Americans of all political stripes should be able to agree that Joe Biden is no genius. The president is prone to bouts of visible confusion and stating obvious falsehoods. Insecure with his cognitive ability, Biden has lied about his academic credentials and was found to have cheated in law school. The man displays the temperament and mind for policy that one might expect from someone with this history of academic dishonesty.

While it’s safe to say Biden isn’t the sharpest president, his thinking on firearms is downright stupid.

On November 24, Biden attacked the majority of American gun owners by claiming there was something “sick” about the firearms Americans overwhelmingly choose to use defend themselves and their families. The president stated, “the idea we still allow semiautomatic weapons to be purchased is sick. It’s just sick. It has no, no social redeeming value. Zero. None.”

Biden went on repeat his intent to enact a ban on certain commonly-owned semi-automatic firearms, like the AR-15, that he and other gun control supporters mischaracterize as “assault weapons.”

This policy doesn’t work. Americans can be sure of this because, as Biden likes to remind the public, a federal “assault weapons” ban has been tried once before (1994-2004). The ban also prohibited standard capacity magazines with a capacity greater than 10 rounds.

The key reason why a so-called “assault weapons” ban cannot have a meaningful impact on violent crime is that the targeted firearms, or any other long guns (rifles and shotguns), are rarely used to commit violent crime.

Faced with the reality that so-called “assault weapons” are rarely used to commit violent crime, a 1997 Department of Justice-funded study of the 1994 ban by the Urban Institute determined that “At best, the assault weapons ban can have only a limited effect on total gun murders, because the banned weapons and magazines were never involved in more than a modest fraction of all gun murders.”

A 2004 follow-up Department of Justice-funded study came to a similar conclusion. The study determined that “AWs [assault weapons] and LCMs [large capacity magazines] were used in only a minority of gun crimes prior to the 1994 federal ban,” “relatively few attacks involve more than 10 shots fired,” and “the ban’s effects on gun violence are likely to be small at best and perhaps too small for reliable measurement.” Presented with overwhelming evidence of the ban’s inefficacy, Congress chose not to renew the gun control measure.

Moreover, there is no significant evidence that restricting magazine capacity would impact the minute subset of violent crime, high-profile shootings, that drive much of the gun control narrative.

The 1997 U.S. Department of Justice-funded study of the so-called “assault weapon” ban noted,

We were unable to detect any reduction to date in two types of gun murders that are thought to be closely associated with assault weapons, those with multiple victims in a single incident and those producing multiple bullet wounds per victim.

To reiterate, the 2004 U.S. Department of Justice-funded study of the 1994 “assault weapons” ban found that, “relatively few attacks involve more than 10 shots fired.” The study went on to add, “it is not clear how often the outcomes of gun attacks depend on the ability to fire more than 10 shots (the current limit on magazine capacity) without reloading.”

A 2016 article published in Justice Research and Policy examined 23 mass shootings with six or more victims that occurred between 1994 and 2013 and in which the perpetrator used one or more magazines with a capacity of more than 10 rounds. The study determined,

In sum, in nearly all [large capacity magazine]-involved mass shootings, the time it takes to reload a detachable magazine is no greater than the average time between shots that the shooter takes anyway when not reloading. Consequently, there is no affirmative evidence that reloading detachable magazines slows mass shooters’ rates of fire, and thus no affirmative evidence that the number of victims who could escape the killers due to additional pauses in the shooting is increased by the shooter’s need to change magazines.

A 2020-updated RAND Corporation study surveyed the available research on the effects of “assault weapons” and “large” capacity magazine bans. The study found no conclusive evidence that such bans have an effect on mass shootings or general violent crime.

In August 2021, the State University of New York’s Rockefeller Institute for Government published a document titled “Policy Solutions to Address Mass Shootings.” Authored by a team of academics that included Northeastern University Professor of Criminology James Alan Fox, the report was negative about the impact a so-called “assault weapons” ban could have on high-profile shootings.

We found no evidence that assault weapon bans deter these events or reduce fatalities when such events occur. These findings are consistent with previous work…

While it might seem logical that banning the sale of assault weapons would reduce the incidence of mass public shootings, this conceptual hypothesis relies on the assumption that if not for the existence of assault weapons, an individual would not carry out a planned mass shooting. We are aware of no evidence to suggest that a potential mass shooter would decide not to follow through with a planned shooting if assault weapons were not available on the retail or secondary markets.

If you’ve read to the end of this article, congratulations! You now know more about the efficacy of Biden’s favorite gun control policy than the President of the United States.