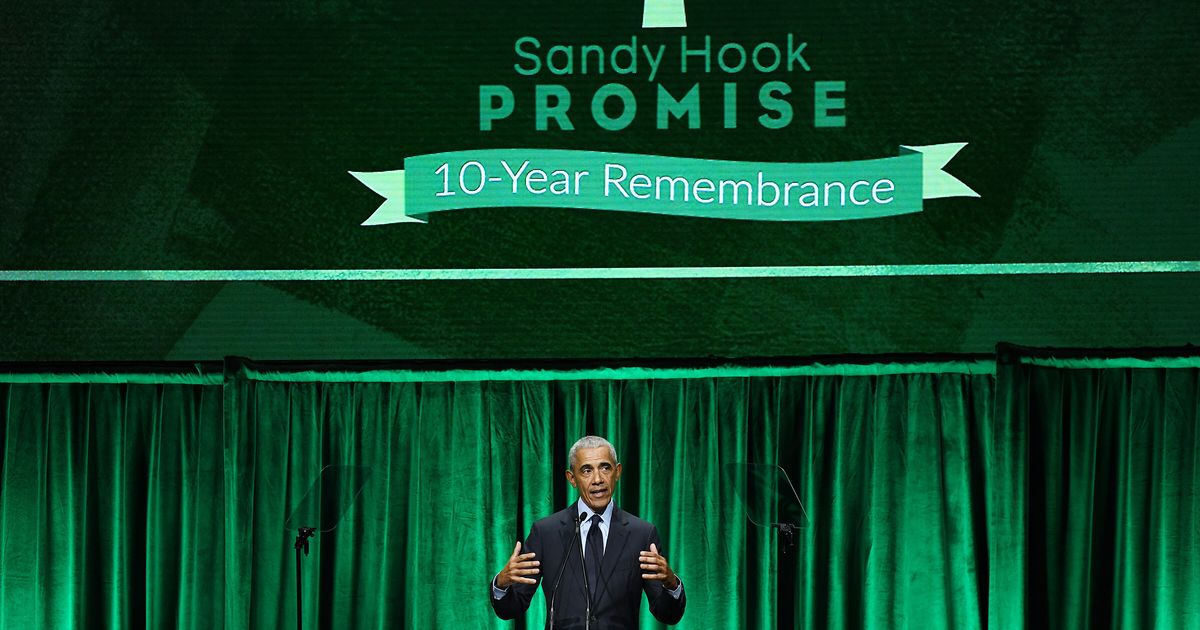 Former President Barack Obama said he still considers the deadly school shooting that took the lives of 20 children and six adults in 2012 the “darkest day of my presidency” as the 10th anniversary of the shooting approaches.

“I consider Dec. 14, 2012, the single darkest day of my presidency,” Obama said Tuesday night at the Sandy Hook Promise “10-Year Remembrance” benefit in New York City. “Like so many other people, I felt not just sorrow, but I felt angry, fury in a world that could allow such a thing.”

Sandy Hook Promise, started by several families who lost loved ones in the Newtown, Connecticut, shooting, is a non-profit that aims to protect children from gun violence while teaching empathy in classrooms.

During his speech at the benefit, Obama praised Sandy Hook Promise for preventing possible acts of gun violence.

While gun violence continues to run rampant in the U.S., there have been glimmers of positive change in the last 10 years. Sandy Hook families won $73 million in a lawsuit settlement this year against Remington Arms, which made the Bushmaster AR-15-style rifle used by the gunman during the massacre. It was the first time a gun manufacturer had been held liable for a shooting.

“Whether it is in a church or a synagogue, in a grocery store or on a college campus or in a home or on a city street … I still feel anger. And I hope you do too.”

And the National Rifle Association (NRA), which saw its membership surge at the start of 2013 following the Sandy Hook shooting, has seen its leadership and political power crumble under the weight of mismanagement and greed over the last few years.

Then there’s Alex Jones, the conspiracy host of “Infowars,” who used his platform to mock the parents of dead children for years, falsely claiming they were actors and that their loved ones never died. This year he was finally held accountable for the torrent of abuse he leveled on the Sandy Hook families when he was ordered to pay more than $1 billion for his dangerous lies.

Earlier this year, 19 students and two teachers were killed in Uvalde, Texas, in a shooting sickeningly similar to that of Newtown. The following month, President Joe Biden signed a bipartisan gun safety bill into law that enhances background checks, addresses mental health care, and places curbs on buying guns.

Obama attempted a similar push for gun violence prevention in 2016 with a bill that would have enhanced background checks. He spoke through tears the day he implored Congress to act.

“Somehow, we become numb to it, and we start thinking, ‘This is normal,’” Obama said.

Instead, the former president was roundly mocked by conservatives for his emotional plea. The bill ultimately failed, thanks in part to pressure from the NRA and a handful of Democrats who voted against the bill to cater to gun-loving voters in their states.

“In 2022, there has not been a single week — not one — without a mass shooting somewhere in America,” he said. “We pretend that the best we can do for the families of Sandy Hook, Parkland and Virginia Tech and so many other communities is to tinker around the edges and then offer rote recitations of our thoughts and our prayers when violence explodes once again.”

Obama admits he still gets angry when he hears about the latest senseless shooting.

“Whether it is in a church or a synagogue, in a grocery store or on a college campus or in a home or on a city street … I still feel anger,” he said. “And I hope you do too.”

Biden Renews Calls For Gun Reform At Vigil For Victims