The Ruger P-Series pistols have a reputation for being trustworthy, durable, and rugged. They tend to sport a stocky, well-built frame, which indicates the stopping power that they possess. However, this takes away from the sleekness of Ruger P345 appearance.

Aside from some minor changes here and there, the P-Series designs are largely similar to the Browning action that is used in the M1911 pistol. These pistols are all double-action, recoil-operated semi-automatics.

History And Reception Of The Ruger P345

These P345s are Distributor Exclusive editions, tagged with serial numbers from 1 to 500, along with some other unique features, such as new 24k-gold details, as well as a blued-steel slide.

The P345 never exactly sold very well. It’s thought that the clunky appearance of the former pistols in the P-Series has held the P345 back from reaching mainstream acclaim. However, it’s unfortunate that the P345 is often categorized with the rest of the P-Series, since the P345 boasts several improvements in design.

Unlike its predecessors, the P345 is easily concealable and does not possess the same bulkiness that the P-Series had become known for. On top of this, the comfortable grip of the P345 is a major improvement over former pistols in the P-Series. Owners of the Ruger P345 swear by its durability, reliability, and value.

In 2013, the Ruger P345 was discontinued by the company, as they turned their focus towards their newer Ruger SR-Series. It was replaced by the SR45.

While Ruger P345s are hard to find, our partner Guns.com will have a few on hand every so often. 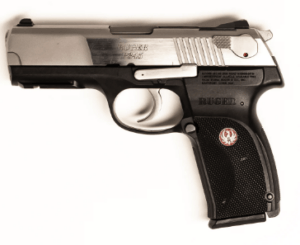 More About The Ruger P345 Design

As mentioned above, the P345 does not have the same clunkiness that the other pistols in the P-Series are known for. Both the frame and the grip are noticeably slimmer, which makes it comfortable to hold, especially for a .45 caliber pistol. 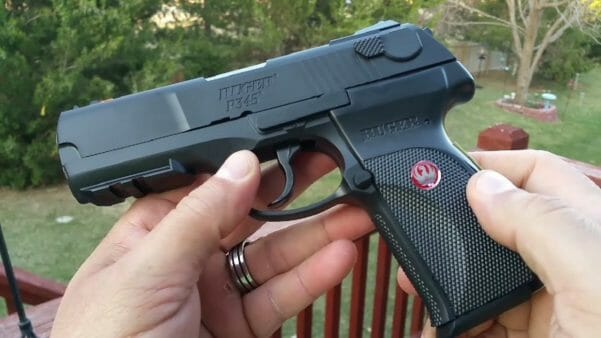 However, because of the ‘camblock system’ of the Ruger pistols, the slide and barrel recoil is transmitted through the bulk of the frame, rather than impacting the slide rails. In the camblock system, the guide rod is attached to a cam-ramped lug on the backside, in lieu of the traditional ‘falling block’ that is use in most semi-auto pistols.

This cam-ramp halts the recoiling barrel’s backwards motion. It transmits this energy into the well-built upper frame, thereby taking stress off of the slide rails. This way, the P-345 can get away with using all-polymer slide rails without running the risk of them being damaged.

On top of this, there is an extra set of rails that creates a tighter space between the slide and the frame on the fore-end. This reinforces the slide while also providing better dust/dirt protection. The Ruger P345 is simple to strip down and clean, and it should come with helpful instructions from the company.

The magazine is interchangeable with the P90 and P97. The gun is notoriously reliable, and is able to shoot at any angle and handle a variety of both handloaded and factory ammo without any sort of malfunction or misfire.

The trigger action of the P345 is the standard DA to SA. The SA pull is a little heavy than some might like, but the DA pull is lengthy and relatively smooth. At the end of the day, there is not much to complain about when it comes to the system.

The Ruger P345 comes with a magazine disconnect safety feature. This feature prevents the pistol from firing when the magazine is not inserted. Since many gun-related accidents are caused from people not knowing that a gun without a magazine can still have a bullet in the chamber, this precaution is well-received by many.

However, some people have been frustrated about not being able to continue firing when pre-releasing the magazine. The magazine holds 8 rounds, so the P345 is a nine-shooter with one in the chamber.

The Ruger P345 has several other safeties, including the ambi-thumb safety, the keyed lock, the cable lock, the firing-pin safety, and the loaded chamber indicator. When the thumb safety is up, then it is off/safe. When it is down, you can slip in the key (provided by Ruger) to lock it up. This will leave the gun off until you go back and unlock it.

The P345 also comes equipped with a bobbed hammer spur and a built-in Picatinny accessory rail. The p345 is user-friendly for both lefties and righties, as it has an ambidextrous slide-mounted decocking lever and the safety is also well-positioned for either hand.

There is a stainless steel finish, and the ergonomic grip is checkered black synthetic. The rear sight is fixed and windage adjustable.

The Ruger P345 uses the .45 ACP (Automatic Colt Pistol) handgun cartridge that was designed by John Browning in 1905. The .45 ACP is known for being one of the best combat cartridges, as it unites excellent accuracy with solid stopping power. The recoil of the cartridge is also rather mild, considering the force of the shot.

One of the reasons why the .45 ACP is known for being so successful against human targets is that the big bullet usually enlarges when bone is struck. With hollow-points, this attribute becomes even more potent.

With all that being said, the .45 ACP has tested to have a middling amount of power in terms of the energy scale, which means that the .45 ACP bullets are unlikely to over-penetrate. This quality, combined with the .45 ACP’s strong stopping power on human targets, makes the .45 ACP a popular choice for police use.

In fact, the .45 ACP is considered a ‘protector of the protectors’. Although the popularity of this cartridge began in the civilian market, it has quickly made its way to the holsters of several police officers, and continues to grow in popularity amongst law enforcement officials.

There aren’t too many aftermarket accessories that are compatible with the rugged P-Series pistols. That being said, there are a few basic things you can add to this firearm, though most of them will need to be hung from the built-in Picatinny rail.

On this Picatinny rail, there are several kinds of sights that can be mounted, including the Stingray SR1 Universal Small Rail Mounted Laser Sight, and some of the Tritium Tru-Dot Night Sights.

As rare as the Ruger P345 is to buy, if you want a holster for your Ruger P345 you have to get creative. We found this holster that is listed for a Springfield pistol fits a P345 perfectly. 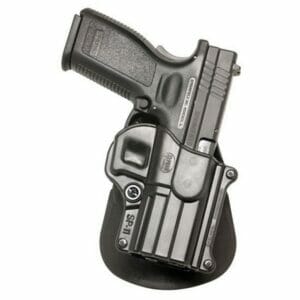 All in all, the Ruger P345 is a great choice for anyone looking for a practical self-defense pistol. Unlike the other pistols in the P-Series, the P345 is easily concealable since it is less bulky. On top of this, the P345 maintains the same level of consistency and reliability that the Ruger P-Series is often praised for.

The fact that police officers swear by the .45 ACP is a good indication of its self-defense ability. Furthermore, the amount of safeties that the gun possesses makes it a safe household option. The combination of impressive stopping power against human targets, mild recoil, no tendency for over-penetration, and lack of malfunctions makes the P345 an appealing option.