1911 pistols are rightly praised for their simple, reliable design, and their classic good looks. Though the design is over a century old now, the best 1911 pistols still perform as well as many more modern handguns. One of the responsibilities of owning any handgun is keeping it well-maintained. All weapons should be periodically stripped and cleaned, and those that you use most often will require cleaning quite often. In this article, we will go into great detail on how to disassemble a 1911 and clean it.

Cleaning a 1911 keeps all the mechanisms clear of rust, corrosion, and other debris. This extends the lifetime of your gun – with regular cleaning and perhaps occasional maintenance, there is no reason that a 1911 pistol will not last for many years.

This makes it more accurate and improves your shooting performance, but also guards against the possibility that the gun will jam, and fail to fire at a critical moment.

Stripping, cleaning, and reassembling a 1911 pistol is actually a lot easier than you think. It’s certainly a more straightforward process than many more modern pistols, because the 1911 was designed as a military, open-carry handgun, and needed to be easy to maintain in the field.

It was therefore designed as quite a simple device, with no parts that are over-complicated.

Today, I’ll take you through the steps necessary to disassemble, clean, and then re-assemble your 1911. We’ll also take a look at what equipment you need to do this.

How Often Should You Clean Your 1911 Pistol?

As often as you like! I know plenty of folks who find the process of field-stripping a weapon, making sure everything is clean, and then putting everything back together, deeply therapeutic.

Once you’ve disassembled and cleaned your 1911 a few times, you’ll actually get really fast at doing it, and the process will eventually become an enjoyable one.

On a more serious note, there are certain times when you need to clean your 1911. If you’ve been out in the rain with it, or if the pistol has been exposed to extremes of heat, humidity, or dust, it is likely to be dirty inside, and should be cleaned.

Even regular use will necessitate you disassembling and cleaning your 1911 gun. Unfortunately, just firing rounds will end up depositing primer and other gunk inside your weapon, so after a few trips to the range, it will need a good cleaning.

People remain hugely divided on how many rounds can be fired before you need to clean your gun. To my mind, it depends on the ammunition you are using.

Cheap ammunition will leave heavier deposits, and so your 1911 should be disassembled and cleaned every 1,000 rounds. 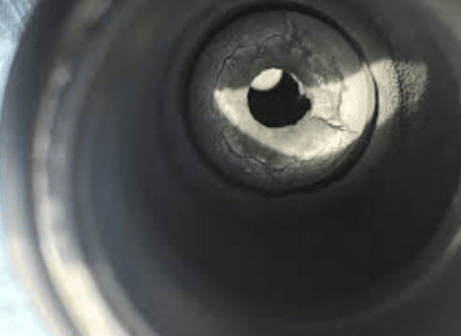 If you only fire premium ammo, and are feeling a bit lazy, you can probably get away with firing 4,000 rounds before cleaning, but I wouldn’t recommend it.

What I would recommend, in truth, is setting reminders to clean your weapons once a month, or every six months, depending on how much you use them.

It’s easier to clean all of your weapons at once, because by the time you’ve got all the tools together, you might as well do the lot.

What Do I Need to Disassemble and Clean a 1911?

If you’ve never disassembled your 1911 before, don’t worry. It’s not as hard as it looks in the movies, and actually quite a simple and straightforward process. Before we get into that, though, there are a few things you are going to need.

Everybody has their own preferences for tools and consumables, of course, but a minimal list would be:

While you could buy all of these items separately, in practice it is easier to invest in a good gun cleaning kit that comes with all the necessary tools. If you own a number of handguns, you can generally use the same tools for all of them, so spending a little extra on a well-equipped kit will end up saving you significant time and money.

My recommendation here would be to go for the Real Avid Gun Boss Handgun Cleaning Kit, or, for a little bit more money, the Real Avid 1911 Pro Pack. Both are fully-featured kits that contain everything you are going to need, both for your 1911 and all your other handguns. 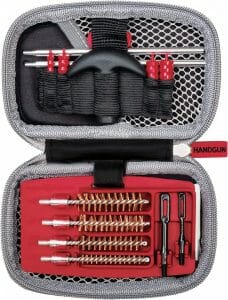 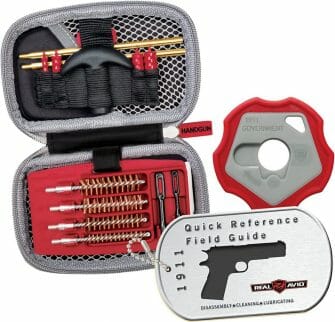 How To Disassemble A 1911 Pistol

Once you’ve got the right kit, you are ready to field-strip your 1911.

Before I describe this process, I cannot stress enough the importance of safety procedures in stripping down any weapon.

Check that the weapon is not loaded, and make sure there is no round in the chamber before you do anything. 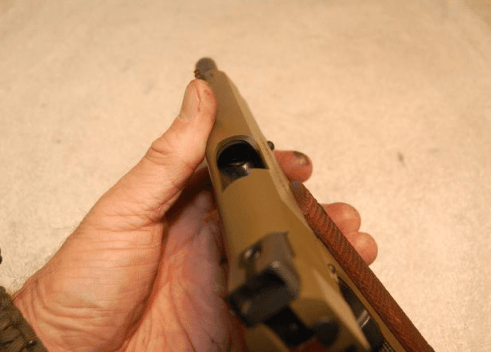 Check the gun is completely unloaded.

Steps to Disassembling a 1911 Pistol

Once you are certain the gun is not loaded, check once more, then you are ready to start taking it apart.

Removing the Plug from Spring on a 1911

This should be the extent of your “normal” cleaning and maintenance for your 1911. But, every so often, you should do an extensive breakdown and cleaning.

If you want to take your 1911 completely to pieces, there are several further steps:

For accompanying photos of each of these steps, I recommend checking out this incredibly detailed and useful photo-guide to 1911 disassembly.

Your frame is now completely disassembled. You should have a pile of small parts and three large parts (slide, barrel, and frame).

Phew. In comparison to disassembling a 1911, cleaning the weapon is actually relatively straightforward. Once you have a pile of smaller bits and a few large ones set out in front of you, you can clean each in turn.

If you are cleaning your 1911 regularly, and you should be, then it is easy to see where deposits have built up. These can be washed away with your cleaning fluids and a vigorous scrub.

If you see any spots of corrosion starting to appear in your 1911, pay special attention to these areas, and make sure you clean them thoroughly – if you leave them on your weapon, they will spread quickly.

Use your barrel brush to give the inside of the barrel a good clean. It is difficult to see inside, of course, but the debris that builds up your brush should give you a good idea of how dirty it is. Once your brush comes back with little or no deposit on it, the inside is clean.

Lastly, give every part a good coating of gun oil. This will protect each part against corrosion until the next time you come to strip your weapon. Don’t worry if the parts feel a little slick and slimy after you have coated them in oil – you can wash off any excess once the gun is back together.

Unfortunately, reassembling a 1911 isn’t just working these steps backward. That would be too easy.

Steps to Reassembling a 1911

For a step-by-step video explanation of the 1911 re-assembly, watch this informative video, courtesy of GUN TIME with Brandon.

At this point, everything else can be reassembled in the order it was taken apart. Be sure to oil all the parts before you put them back in place.

Disassemble and Cleaning a 1911 Pistol Conclusion

Whilst the instructions above might sound complicated when put on paper, in reality stripping down a 1911 is a relatively simple process. After all, soldiers have been stripping these pistols in muddy trenches for over a century now!

And once you’ve been through this process a few times, I promise you that it will become second nature. Once you have a gun in front of you, and have some knowledge of how it works, the steps you need to carry out are pretty obvious.

Ultimately, keeping all your weapons free from corrosion, and firing true, is going to make you a more effective shooter, and reduce the possibility that your 1911 pistol is going to fail at that critical moment.

Best 1911 Pistols For The Money

History Of The Beloved 1911