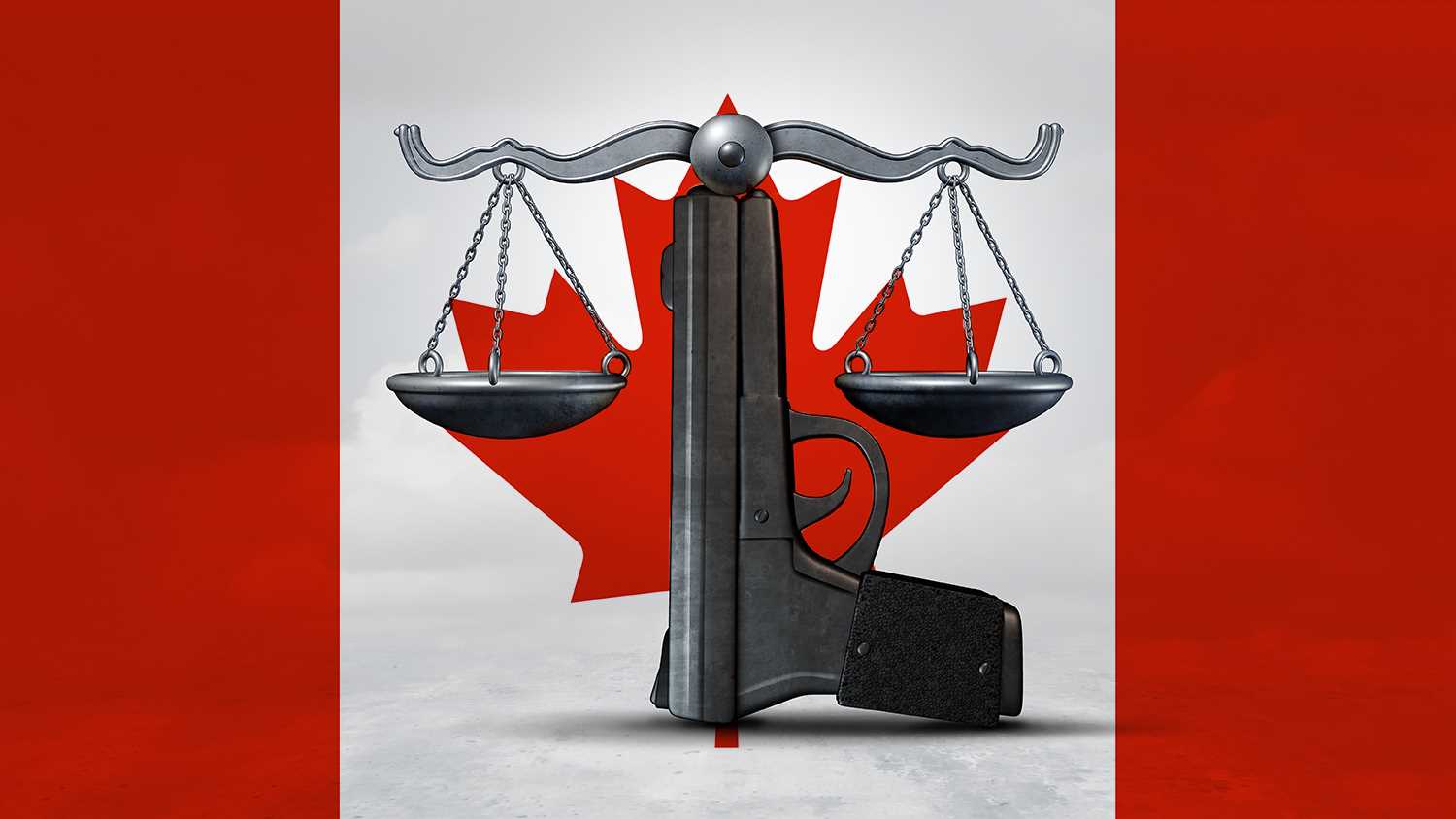 How appropriate is it that “gaslighting” (“the act or practice of grossly misleading someone especially for one’s own advantage”) is Merriam Webster’s word of the year for 2022.

In May 2020, Canada’s Liberal Prime Minister Justin Trudeau unilaterally imposed, through Orders-in-Council, a ban on thousands of firearm models and variants arbitrarily classified as “assault weapons,” concurrent with a limited amnesty and implementation through confiscation (“buyback”). At the time, Trudeau’s government claimed that the ban was not intended to prohibit guns used for legitimate activities like hunting or sport shooting, but only guns “designed for soldiers to kill other soldiers…guns that belong on a battlefield and not on our streets.” Law-abiding gun owners were explicitly assured that “nothing that we are doing today or will do in the future is intended to interfere with this lawful, responsible, and legal activity. However, we are today ending the availability of weapons that were not designed for hunting or for target shooting…”

Since then – despite no clear action being taken to implement the 2020 “assault weapons” ban – the Trudeau government introduced Bill C-21 this year, proposing a national freeze on the importation, sale, or transfer of handguns, together with companion regulations “to help stop the growth of personally owned handguns in Canada.”

Marco Mendicino, the federal Minister of Public Safety, explained that the bill was a “comprehensive strategy to promote safe and responsible gun laws … and to invest in communities to address root causes and prevent gun crime from occurring in the first place.” This legislation will help to reduce gun violence and keep Canadians safe.”

The numerous submissions filed at the committee stage of the bill proceedings included a brief on the bill by the National Police Federation (NPF). It points out that Bill C-21“primarily targets legal firearm owners who have followed the regulations as opposed to addressing the root causes of firearm violence and violent crime… Bill C-21 narrowly focuses on the ‘tool’ and not the criminality surrounding it. Firearms are simply a tool of criminality. By only addressing the tool, then you are failing to address the root problems, and the criminal perpetrator will continue to offend and victimize with different tools or in complete disregard of the legislation as criminals do obtain firearms illegally today.”

In testimony on the bill before the Committee on Public Safety and National Security, Tony Bernardo, the Executive Director of the Canadian Shooting Sports Association (CSSA), raised the issue of compensation, which distinguishes the bill from the May 2020 ban. The bill “mandates fiscal destruction and finally confiscation without compensation” by essentially designating affected firearms useless and ultimately valueless. “[T]his government chooses to ignore the experience of our Commonwealth partners and British common law. Even this government recognized how wrong this was when they enacted the May 2020 order in council confiscation of modern sporting and hunting firearms. They pledged fair market compensation for the theft of these firearms.”

Now, a late November amendment to Bill C-21 is being called potentially the largest gun ban in Canadian legislative history.

The amendment, put forward by Liberal Member of Parliament (MP) Paul Chiang (Markham – Unionville), would reportedly add long guns, including guns prohibited under the May 2020 regulations, to what is a “prohibited firearm” – namely, any “firearm that is a rifle or shotgun, that is capable of discharging centre-fire ammunition in a semi-automatic manner and that is designed to accept a detachable cartridge magazine with a capacity greater than five cartridges of the type for which the firearm was originally designed.” It would also prohibit any device or firearm identified specifically in an extensive, 307-page list, as well as criminalize the possession of “computer data that pertain to a firearm” that are capable of being used with a 3D printer, metal milling machine or similar computer system.

One newspaper described the amendment as “a massive expansion of a gun control bill that was initially pitched mostly as a way to prevent the sale of Canadian handguns. Literature accompanying the first draft of Bill C-21 made no mention of plans to target legally owned long guns.” The addition of this extraordinary change to the bill at this late stage, after second reading has occurred, eliminates much of the opportunity for citizens to question and debate the changes.

Speaking about “this latest Liberal assault on RCMP-vetted, federally licensed firearm owners,” Tony Bernardo responded that the “majority of Canada’s 2.2 million licensed firearms owners will now be criminalized, should these amendments to Bill C-21 become law.”

The Canadian Coalition for Firearm Rights noted that if the amendment passes, “Canadian firearms ownership will be dealt its most massive blow in history,” one that will “effectively mean the end of all semi-automatic long guns in Canada” – and, unlike the assault weapon ban, there is “no mention of compensation for current owners.”

The bill’s economic impact would be far reaching and devastating. Apart from the huge price tag for enforcement and compensation, a “regulatory impact analysis statement” included with the May 2020 Order-in-Council noted that there were approximately 4,442 licensed firearms businesses, a “large majority” of which were small businesses. It cited a 2019 Conference Board of Canada study that determined 1.3 million Canadians participate in legal hunting, and hunting “contributes an estimated $4.1 billion to Canada’s GDP as well as $2 billion in labour income, and supports about 33,313 full-time equivalent jobs.” According to the same source, “an estimated 1.4 million Canadians participate in legal sport shooting… Sport shooting contributed an estimated $1.8 billion to Canada’s Gross Domestic Product (GDP) in 2018, as well as $868 million in labour income, and supports about 14,555 full-time equivalent jobs.” A more recent source, a submission by the Canadian Sporting Arms & Ammunition Association (representing “Canadian businesses that operate under the firearm and hunting umbrella”) on just the handgun freeze aspect of Bill C-21, indicates that hunting and firearm businesses alone “contribute over $5 billion dollars to Canada’s GDP and support well over 45,000 jobs…Handgun sales make up 30%-40%+ of business for most of our members.” All of these revenue-generating activities and businesses would be negatively, and likely permanently affected, if the bill is passed.

Gun rights groups are urging gun owners and concerned Canadians to contact their elected representatives and express their clear opposition to Bill C-21. The bill not only criminalizes popular, mainstream hunting and sport shooting firearms legitimately owned by millions of individuals – guns that play no role in crime – but it lacks any public safety benefits and will cost billions in lost revenue, jobs and businesses, and implementation and enforcement.

By now, it’s obvious that the actual agenda has never been about public safety or respecting law-abiding, responsible Canadians. A statement issued on behalf of the Province of Alberta by Minister of Justice Tyler Shandro accurately exposed the federal maneuvering on firearms for what it really is:

The decision to take this action abandons long-held claims put forward by Public Safety Minister Marco Mendicino – namely, that the federal government was only seeking to ban so-called ‘assault-style’ firearms and that they would somehow equitably compensate firearms owners. If the amendments are successful, Bill C-21 will lead to the most sweeping and arbitrary ban in Canadian history. The ban will not only be unenforceable but will criminalize hundreds of thousands of Canadians. … The federal government is clearly seeking to ban legal firearm ownership altogether. In the coming weeks, Alberta will explore all available options to take action.

For his part, Minister Mendicino continues to stick to the Liberal script. On November 28, he was quoted as dismissing concerns over the amendment as “simply Conservative fearmongering.” “The government has no intention — no intention whatsoever — to go after long guns and hunting rifles,” he insisted.