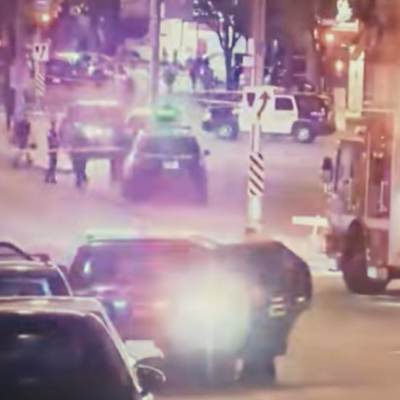 A TV ad from a gun control advocacy group claims Republican Sen. Ron Johnson voted “against funding for the police, preventing local departments from hiring more officers.” But the two votes cited were against trillion-dollar spending bills that included a host of measures, well beyond law enforcement funding.

The ad leaves the misleading impression that Johnson simply opposed providing money for local police departments, but these pieces of legislation were much more complicated than that, giving lawmakers many reasons they may have supported or opposed them.

Everytown for Gun Safety Victory Fund, a super PAC, launched the TV spot on Sept. 23 as part of a $1 million media buy in Wisconsin for the midterms.

Johnson and Republican groups have repeatedly attacked his Democratic opponent, state Lt. Gov. Mandela Barnes, over the issue of police funding and crime. We’ve written about those misleading claims already.

It’s worth noting that this battle over who supports police more (or less) would be more apt in state or local government campaigns. In 2019, 87% of police funding came from local governments, according to the Urban Institute. “Nearly all state and local spending on police, corrections, and courts was funded by state and local governments because federal grants account for a very small share of these expenditures,” the think tank’s report said, noting that the figures didn’t include spending on federal policing, such as for federal prisons.

The TV ad cites two votes by Johnson: against the $1.9 trillion American Rescue Plan in 2021 and against the $1.3 trillion consolidated appropriations bill to fund the government in 2018.

We’ll start with the ARP.

The American Rescue Plan is a COVID-19 relief law that passed without any Republican support. It was signed into law by President Joe Biden in March 2021.

The ARP included $1,400 checks to most Americans; expanded unemployment benefits; and money for schools, small businesses and states. More than $350 billion was dedicated to state, county, city and tribal governments to use largely as they wished to aid in the economic recovery from the pandemic and public health measures.

Biden encouraged states and localities to use the money to support essential workers, including police. But there was no requirement in the legislation to spend money on law enforcement.

On March 6, 2021, after the Senate narrowly passed the bill, Biden said that state and local governments would now “have the resources they need available to them” to rehire “laid-off police officers, firefighters, teachers and nurses.” National police organizations also said they had worked to make sure the law included that aid to states and localities.

The administration has boasted that some of the funding was indeed used to hire police and support law enforcement. A May 13 White House fact sheet touted the millions of dollars in Houston dedicated to police overtime, and mental health and domestic violence efforts, among other initiatives; millions spent in Kansas City, including on hiring 150 police officers; and several other examples of cities using ARP money to invest in police equipment, recruitment and community safety programs. It also said Wisconsin had dedicated $100 million in anti-violence efforts across the state.

So the law did provide funding for police. But the nearly $2 trillion legislation provided funding for a lot more than that, and many Republicans said they opposed it because of the total cost, questioning the need for the spending after other COVID-19 relief legislation was enacted in 2020.

We previously wrote about the misleading claim that congressional Republicans “defunded the police” in voting against the ARP. In that story, we noted that White House Press Secretary Jen Psaki didn’t identify a single Republican who opposed the bill because of funding for police, when she was pressed on the matter in a June 2021 press briefing.

Johnson, on the day of the Senate vote on the legislation, released a statement saying that he opposed it because it would increase the debt and was “unneeded” for COVID-19 relief.

“This is not Covid relief — it is a massive debt burden that further mortgages our children’s future. I support helping people truly affected by the pandemic, but we should have targeted the unspent $1 trillion from previous bills first,” Johnson said. “The economy is already in a strong recovery, and this bill could spark harmful inflation. It was unneeded and unwise.”

As we’ve written, economists have credited the ARP with boosting the economy. But many also have said in retrospect, the law was too big and did contribute to, but didn’t “spark,” higher inflation, which was largely due to pandemic-related factors and Russia’s invasion of Ukraine.

When we asked Everytown about the ad, a spokesperson highlighted a question anchor Chris Wallace posed to a Republican lawmaker on “Fox News Sunday” on June 27, 2021. Wallace was interviewing Rep. Jim Banks, who blamed an increase in crime on Democrats, saying they supported “defunding the police.” Wallace responded that he wanted to “push back on that a little bit,” citing the ARP and Biden’s comments that the bill included funding for police.

Wallace asked: “Congressman Banks, you voted against that package, against that $350 billion, just like every other Republican in the House and Senate, so can’t you make the argument that it’s you and the Republicans who are defunding the police?”

But as we wrote previously, about a presidential adviser’s comments on the same show, this wasn’t a vote to cut federal funding for police, as the “defund” phrasing might suggest.

Nor was it simply a vote on police funding.

The second vote cited in the Everytown ad is Johnson’s vote against a $1.3 trillion consolidated, or omnibus, appropriations act that narrowly averted a government shutdown in late March 2018. Everytown notes that bill, signed into law by then-President Donald Trump, included $2.4 billion for state and local law enforcement programs. But, again, it included funding for many other government programs — in fact, it funded the government for the rest of the fiscal year, through Sept. 30.

The 65-32 vote in the Senate was also bipartisan, with eight Democrats and one Independent voting against it.

We asked Everytown if that meant Sens. Cory Booker, Kamala Harris, Elizabeth Warren and Bernie Sanders, among a few other Democrats who opposed the bill, also voted “against funding for the police,” but we didn’t get a response.

Democrats had hoped to include a measure to protect so-called Dreamers, those who were brought to the United States illegally when they were children and qualified for deferred deportation proceedings and work authorizations through the Deferred Action for Childhood Arrivals program. The failure to get a DACA fix in the funding bill was one of the reasons Sanders said he voted against it.

“Unfortunately, there are two fundamental failings in this deal that prevented me from voting for it. First, this bill does not address the great moral issue of our time – the fact that 800,000 young Dreamers in the DACA program are in grave danger of losing their legal status and subject to deportation,” Sanders said in a March 23, 2018, statement. “Second, the $165 billion increase in defense spending over two years is much too large. I believe in a strong military, but at a time when the U.S. spends more on defense than the next 12 countries combined, this increase is much too much.”

We couldn’t find a statement from Johnson at the time on his vote, and his campaign did not respond to our questions about this TV ad. But the point is that the motivation to vote against a large appropriations bill could include any number of reasons.

And using the same logic as the support for the ad, it could be argued that Johnson voted for police funding, when he voted for 2019 government funding legislation, which appropriated $304 million for the Community Oriented Policing Services, or COPS, program, which provides grants to states and localities.

After the Barnes campaign also charged that Johnson had voted against police funding, mainly citing omnibus appropriations laws, Johnson told reporters that he has voted against spending overall because of the nearly $31 trillion of debt, a figure that includes $6.6 trillion in money the government owes to itself.

“I vote against mortgaging our children’s future. And when you vote against a 2,000-page omnibus spending bill that’s probably spending a trillion dollars, there’s going to be good things in there they’re going to spend money on. But somebody has to have the courage to say no, we have to stop this. We’re seeing at least the beginning of a major debt crisis,” Johnson said, according to the Milwaukee Journal Sentinel.

The paper noted that “most” of the votes the Barnes campaign pointed to “were omnibus legislation that contained many provisions beyond being related to the police.”

Also among the votes cited by Barnes was one to block consideration of a 2011 bill to provide states and local governments with funding to hire and retain teachers and first responders. The legislation included $4 billion for grants to hire and retain law enforcement officers, and proposed a surtax on those earning more than $1 million to pay for the entire $35 billion act.

The Everytown ad goes on to say Johnson “supported flooding our streets with guns, and making it easier for violent criminals and domestic abusers to get them.” The cited votes were against gun-control measures.

It’s true that Johnson voted against expanding background checks and against prohibiting those convicted of abusing a dating partner from getting guns.

We’ll provide an explanation of the votes.

The ad points to Johnson’s vote against the Bipartisan Safer Communities Act, which became law on June 25. Fifteen Republicans voted with all Democrats in the Senate to pass it.

The law could keep some guns off the streets. It beefed up background checks for those under age 21, increased penalties for firearms trafficking, required more people who sell guns to register as federally licensed sellers (which means they would then have to run background checks before selling guns), and barred more people convicted of domestic abuse from getting a firearm — hence the ad’s reference to “domestic abusers.”

That provision closes what was called the “boyfriend loophole.” The legislation extends prohibiting gun ownership to those convicted of domestic violence crimes against a dating partner (as opposed to only a co-parent or former/current spouse, as was the case before). But the Safer Communities Act allows those convicted of a misdemeanor domestic violence offense to once again own firearms five years after the conviction.

The ad also cites two Johnson votes on amendments to the Safe Communities, Safe Schools Act of 2013. He voted against an amendment to expand gun background checks, and for an amendment to institute reciprocity for concealed firearms, meaning that someone permitted to carry a concealed weapon in one state could do so in other states.

There was no final vote on the bill.

Everytown has a point about Johnson’s strong support for gun rights. After all, he has been endorsed by the National Rifle Association and has an “A” rating from the group. But the ad misleads when it cites the senator’s opposition to trillion-dollar spending bills as evidence of “voting against funding for police.”

Editor’s note: FactCheck.org does not accept advertising. We rely on grants and individual donations from people like you. Please consider a donation. Credit card donations may be made through our “Donate” page. If you prefer to give by check, send to: FactCheck.org, Annenberg Public Policy Center, 202 S. 36th St., Philadelphia, PA 19104.