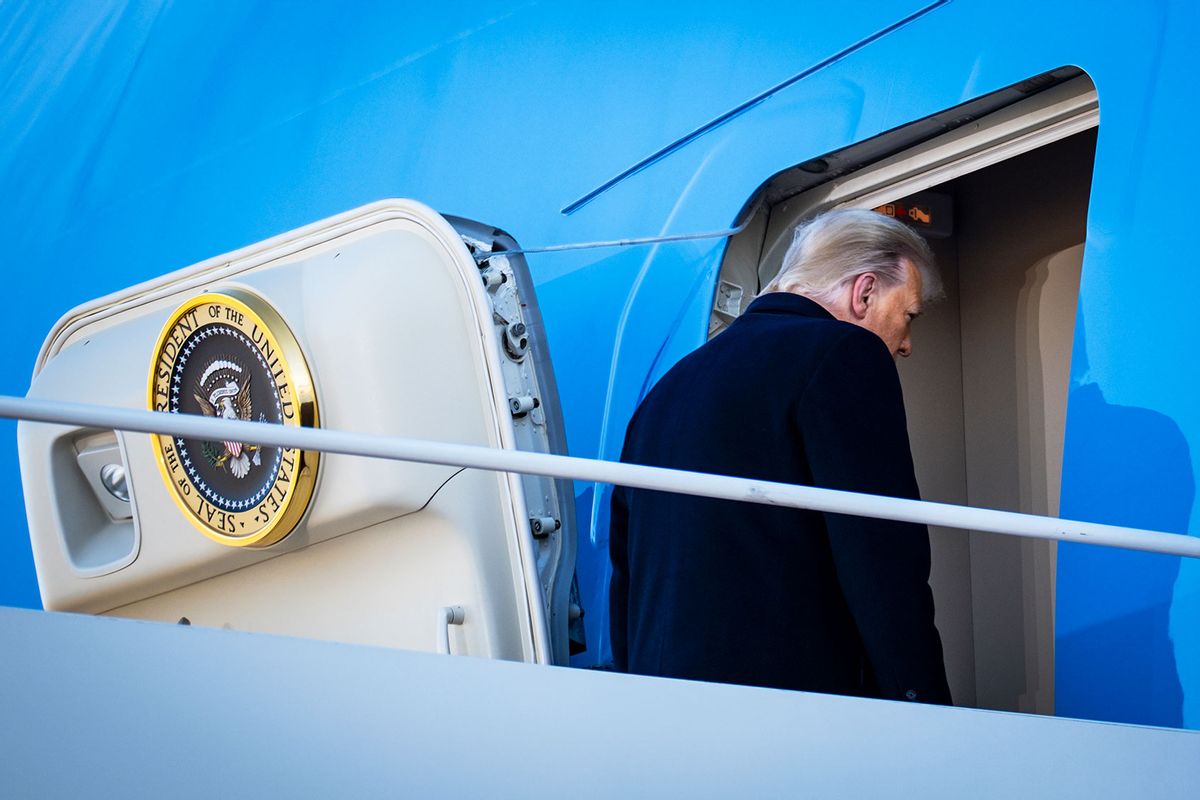 UN Secretary-General António Guterres opened the first post-pandemic meeting of the General Assembly in New York this week warning that the world is in a dangerous place: more divided than ever, teetering on the edge of totalitarianism due to economic inequity and facing  a mountain of problems due to climate change. “Divides are growing deeper. Inequalities are growing wider,” he said. “And challenges are spreading farther.”

We all know the source of the great divide in the United States: former President Donald Trump. He’s the large rock thrown into the world’s political ocean, causing tsunamis and ripple effects that can tear nations asunder.

God bless his pointed, dyed and empty head, he’s still hard at it. A few days earlier, Trump held a rally in Youngstown, Ohio, before his faithful QAnon followers in a half-empty arena. They raised a one-finger salute to him at such an angle that for many it invited comparison to the Nazi salute. To me it looked more like something from a Three Stooges skit. And no, it wasn’t “that” finger.

Meanwhile, Marjorie Taylor Greene was accused of kicking child activists, Matt Gaetz was reported to have sought a preemptive pardon for sex-crime charges he has yet to face and Ron DeSantis and his Texas confederate, Greg Abbott, are using asylum seekers as pawns, shipping them off to Northern cities like a pair of human traffickers in training. All of this highlights the growing sense that we are two nations, instead of the United States, while also showing the world how regressive, hateful and fear-mongering the Republicans have become.

I don’t feel completely certain this reality isn’t just the LSD flashback my college dealer promised before I took some bad blotter acid. Meanwhile, most who have a conscience and are conscious believe there will never be a reckoning for the loathsome, dehumanizing, racist, misogynistic, rage-fueled, empty-headed, divisive actions of politicians across the globe.

I don’t feel completely certain that this reality isn’t just the LSD flashback my college dealer promised me before I took that blotter acid.

There is a certain unity among the fans of authoritarianism, and today the American far right is replete with Vladimir Putin lovers. Putin is the ultimate strongman in today’s world and wants to get the old Soviet Union band back together. He hates democracy and, with the exception of Donald Trump, has never gotten along with American presidents. He’s funneled money into politics across the globe to try and destroy democratic governments — even dumping money into the NRA to spread his authoritarian message to those Americans who worship guns before Jesus, while still claiming they are Christian.

Those gun-loving evangelicals are pushing hard to make sure women die or are forced to give birth, and don’t really seem to care which happens. If women die in childbirth, they’ll shrug their shoulders and say, “Whatever God wills.” If unwanted children are born, those same so-called Christians will shrug their shoulders and refuse the mother and child sustenance, health care or infrastructure. But they’ll happily support hiring those children a few years later to pick lettuce or work in coal mines, if only they can crush the unions that once pushed for child labor laws. They are eager to defend the right to choose when it comes to COVID vaccines, but not when it comes to women. They remain chattel.

The Democrats are struggling to hold onto both their sanity and a majority in Congress. They just can’t seem to figure out why anyone would still support Trump, Abbott, DeSantis, Greene, Gaetz, Lauren Boebert, Jim Jordan, Mitch McConnell or the other rancorous horsefly larvae in the Republican Party.

Rusty Bowers, an Arizona conservative Republican who testified before the House Jan. 6 committee, recently lost the GOP primary for a state Senate seat to former state Sen. David Farnsworth, who said he had “no doubt” the 2020 election was stolen from Trump by a “conspiracy headed up by the devil himself.” Hmm — maybe he’s the one who took the wrong acid and is now having his flashback.

At any rate, Bowers said “welcome to fascism” afterward, and that seems to be where we are just six weeks from the 2022 midterm elections. That’s a significant timeframe: It was six weeks before the 2020 general election when Trump told me in the White House briefing room that he wouldn’t accept a peaceful transfer of power. We all know where that ended. He has never accepted his defeat.

It appears we’re still in the same boat, rowing toward the Trump-induced tsunami — an existential horror show highlighted by crimes against humanity and underscored by an especially scary week in news.

But let’s take some time to understand what we’re actually seeing this week: It’s the end of Donald Trump, the death throes of an anachronistic political party and the destruction of authoritarianism (if we choose) on a global scale.

Sure, it’s frightening to see Donald Trump sucking up to QAnon supporters while continuing to beg for money in the dozens of daily emails sent out to his supporters. Those QAnon folks are batshit nuts. But if they’re your core supporters, you’re cooked. National polls show Trump’s post-presidential popularity continuing to fade. Are those QAnon supporters violent? Sure, some are. But can Trump move the mainstream like he did in 2016? Not a chance. He’s supported by a continually dwindling number of malcontents, morons and mavens of autocracy. He’s losing his mojo.

Sure, it’s frightening to see Donald Trump sucking up to QAnon supporters — they’re bats**t nuts. But if they’re your core supporters, you’re cooked.

This week’s $250 million civil suit filed in New York by state Attorney General Letitia James against Trump, his company and his three adult children underscores how little time Trump has left as a grifter preying upon a gullible public. Trump had “violated several state criminal laws, including falsifying business records, issuing false financial statements and insurance fraud,” James said. She added that Trump wasn’t going to get away with it just because he was an ex-president. Thank God.

Let’s face it, we all knew it was going to end this way. If you saw Trump make fun of a reporter with a disability, if you ever saw him on his TV show or if you ever met the man in person — you had to know. If you didn’t, then you were his mark.

For months I’ve said that all this ends with an indictment, and I see no reason to change my mind now. Trump’s former fixer, Michael Cohen, who was thanked by James in her press conference, told me afterward that he was appreciative of the shout-out (after all, the original investigation began with him) but was surprised as well. “The last few years have been filled with sadness, pain and anger,” he told me, but Wednesday’s announcement by James “makes all that hell worth it.” Cohen also believes Trump will be indicted, and still thinks he won’t run for president again. “It’s all about the con,” he said.

And Trump’s powers to run the con are waning. He convinced a judge (who he had appointed) to order a special master to review classified and other material seized after the FBI search of Mar-a-Lago in August, but that hasn’t gone so well for Trump to this point. Judge Raymond Dearie of Brooklyn — the guy Trump’s team wanted — told Trump’s lawyers, “You can’t have your cake and eat it,” after they consistently declined to repeat Trump’s public assertions that he had declassified all the documents taken from his home. (In an interview with Sean Hannity on Wednesday evening, Trump claimed that as president he could declassify documents “just by thinking about it.”) It appears Trump is no longer the master of his domain.

The news got worse for him on Wednesday when a panel of judges on the 11th Circuit Court of Appeals granted a Justice Department request that will allow prosecutors to continue investigating the former president while Dearie evaluates the materials taken by the FBI from Mar-a-Lago — even if the agents refused to take their shoes off.

But Trump isn’t the only racist, fear-mongering con man whose time is running out.

Ron DeSantis thinks he’s a pretty smart guy. He’s managed to limit press coverage and criticism of his more Mussolini-like tendencies. He also really likes to stick it to the Democrats, the Walt Disney Company and anyone else in Florida who doesn’t bend over and take it. He is one of the biggest peddlers of fear in our country right now. His “stunt” in shipping immigration asylum seekers to Martha’s Vineyard could actually be considered a criminal act — and at the very least was irrational and hateful.

Want a daily wrap-up of all the news and commentary Salon has to offer? Subscribe to our morning newsletter, Crash Course.

Joe Walsh, the former Tea Party congressman who was Trump’s only GOP opponent in 2020, pointed directly at DeSantis for creating fear where there should be none. “This needs to be said again: There are people every day who sneak across the border and enter this country illegally,” Walsh wrote on Twitter. “But people seeking asylum are NOT entering this country illegally. And those people DeSantis put on a plane were seeking asylum. They were NOT here illegally.”

Turns out some of those asylum seekers are now suing DeSantis. After that he reportedly backtracked from the chorus of hearty guffaws, allegedly saying he wasn’t the architect of the plan to spend Florida’s tax dollars on shipping asylum seekers from Texas all the way to Massachusetts. He’ll be cooked before he can ever become another Donald Trump.

Matt Gaetz is on the outs, and apparently can’t find a date on Tinder or Bumble. Ted Cruz can’t find a Cancún cabana in which to hide. Jim Jordan is facing scrutiny for his role in a college sexual abuse scandal, the focus of an upcoming HBO documentary produced by George Clooney. Greene and Boebert are pariahs with little actual power, just big mouths. They gain attention like the kid in the sandbox who constantly soils themselves, through indiscriminate yelling. That leaves Mitch McConnell and Rand Paul, two devilish freaks of nature who must  have a special ingredient in their Kentucky bourbon to keep them standing despite their fascist tendencies. Those two, along with Bill Barr, seem to have preternatural survival instincts.

That’s on the domestic front. Guterres pointed out that the problem of totalitarianism is spreading across the globe. Trump, with his bombast and open disregard for the law, enabled petty dictators everywhere. That point was underscored this week as Putin announced he would call up 300,000 reserves for the war on Ukraine and threatened to retaliate against the West with nuclear weapons if he so chooses.

“He has 81 percent of his army committed in Ukraine,” a source at the National Security Council told me. “He is losing and has no other play.” This move shows both Putin’s weakness and his danger. Much like Trump, he’s a cornered rat — the man behind the rise of global authoritarianism. He’s a master of deflection, propaganda and the long con, and he’s made the world much more dangerous. Still, there is hope.

In Guterres’ speech this week he made one thing exceptionally clear: If you can still speak out against the fascists, then there’s still hope they can be defeated.

But it was Letitia James and the 11th Circuit Court on Wednesday who made that deliciously clear.

about the continuing Trump melodrama