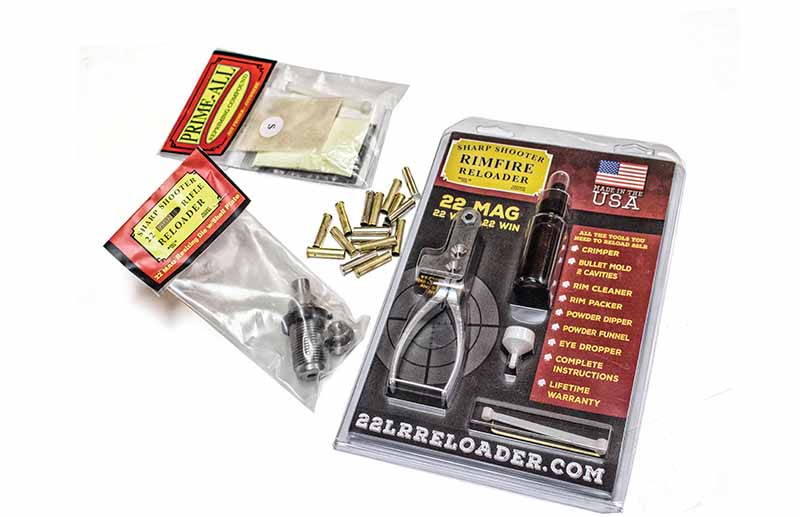 A rundown on reloading rimfires with the help of the Sharpshooter .22 LR Reloader Kit.

Reloading rimfire cartridges has been off-limits for as long as I can remember, simply because the process would require priming your own cases. Well, I’ve found a neat system that allows you to reload.22 Long Rifle: The Sharpshooter 22LR Reloader Kit.

The kit ($74.95 retail) comes in a neat package, complete with all the tools needed, and they offer their Prime-All priming compound (sold separately at $19.95) to reprime the spent cases. They offer a reloading kit that’s compatible with .22 WMR, .22 Win-Auto and .22 WRF as well (MSRP $89.99). The kits include a two-cavity bullet mold—that same mold is used as a crimping tool—rim cleaner, rim packer, powder dipper, neat little powder funnel and eye dropper, used in the priming process.

This system allows the user to take spent cases from the firearm from which they were fired and bring them back to the point where they’ll function (at least in the same firearm). Should you want, they also offer resizing dies for both cartridges, so that your reloaded cartridges can be sized properly for use in any gun, not just the gun they were fired in.

A full set of instructions is included in the kit, including load data for several popular powders, and even a load for ground-up match heads! For some reason, this whole kit brought a breath of fresh air to the normal reloading procedures, and I found myself showing the system to my dad—Ol’ Grumpy Pants—who has a penchant for all things survival. And as you’ll see, the Sharpshooter 22LR Reloader Kit is definitely in the prepper line of thinking.

But, as Dad says: “Sometimes any ammo is the best ammo you could ask for.”

We grabbed some spent cases from GP’s Ruger Single Six revolver. While the empties would fit easily in the cylinder of his handgun, they wouldn’t chamber in any of our rifles (I’d later use the resizing die to solve that problem).

The first step was to start casting some bullets and, using the dual-cavity mold provided, it was an easy process. There are two bullet types in the mold: the 25-grain solid point (looking much like an airgun pellet) and the 38-grain round nose, which is shaped like the traditional .22 LR bullet. Both are heeled bullets, in true rimfire fashion. The mold is aluminum, so it’ll heat up quickly. We had the best results when the mold was held closed, as it reduced the “seam” in the cast bullet.

There’s no need to take the dent out of the rim of the case, as you’ll be packing the priming compound back into the rim, and the odds of the firing pin striking in the same place twice run about 1 in 72. The instructions include the method of priming by using ground-up match heads, or roll caps (remember cap guns?), but I much prefer the Prime-All. This requires a bit of effort to make, but it’s not exactly rocket science. The package includes four different powders in individual packets and using the dual-sided scooper included in the set, you’ll mix a specified amount of the four powders. We used a tall, narrow glass to mix the powders, and it worked perfectly. Using a wooden matchstick or toothpick, make sure there are no lumps in the mixture.

Again, using small end of the scoop, fill it about one third, and add a drop of acetone, rubbing alcohol or denatured alcohol. You’ll then pack a small amount of this mixture into the rim of your case and push it toward the rim, using a toothpick or the rim-packing tool to work that mixture into the case rim.

Depending on what liquid media you use, the drying time may vary, but you’ll need to allow the compound to dry completely. There are instructional videos that’ll give highly detailed instructions, but rest assured the process isn’t all that difficult. In the dozens of cartridges we made, all of them fired perfectly.

Included in the instructional pamphlet is load data for each of the bullets, for varying barrel lengths. Alliant’s Unique, IMR PB, IMR 700X and Hodgdon’s Pyrodex P all work well. The same scoop used for mixing the priming compound is used for charging the cases.

Velocities weren’t the most consistent that I’ve ever measured—most assuredly a result of scooping such small, light powder charges—but I suppose some more time spent refining the load data would help out. I also think that the reloading die is a worthwhile investment if you’re concerned about maximizing energy, as it’ll make the case dimensions as uniform as possible. Segregating your cases by brand could also help to keep things more consistent, as I’m certain there’ll be volumetric variances from brand to brand.

Will I say this ammo is match grade? No, I won’t go that far, but I will say that Ol’ Grumpy Pants and I made reliable ammunition, more than suitable for closer ranges.

You can find the Sharpshooter Kit at 22lrreloader.com.

Editor’s Note: This article originally appeared in the June 2021 issue of Gun Digest the Magazine.