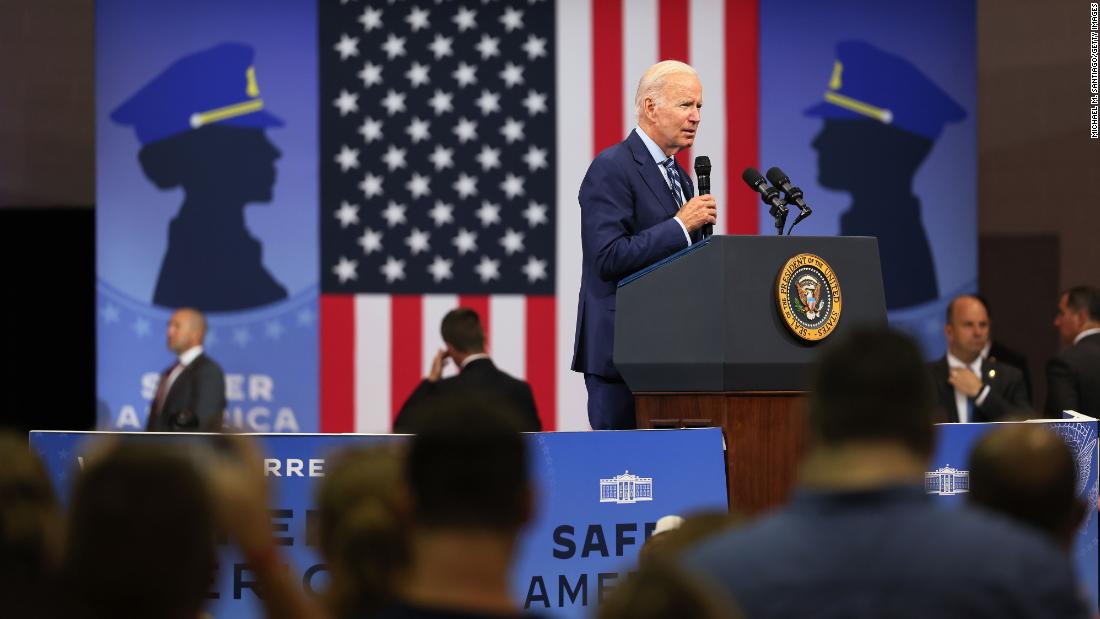 Share on Facebook
Share on Twitter
Share on Pinterest
Share on LinkedIn
Share on Facebook
Share on Twitter
Share on Pinterest
Share on LinkedIn
Biden found his voice in one of his most robust political speeches yet as president, days after condemning GOP “semi-fascism,” as part of a three-stop blitz in the coming week in Pennsylvania — a battleground that could decide the Senate’s destiny in November.
“You can’t be pro-law enforcement and pro-insurrection,” Biden said in remarks specifically calling out Republicans on Tuesday. “You can’t be a party of law and order and call the people who attacked the police on January 6 patriots. You can’t do it.”
He also implicitly rebuked Republican Sen. Lindsey Graham, who had warned of street riots if the former President is indicted after an FBI search of his Florida resort after taking classified documents when he left the White House.
“The idea you turn on a television and see senior senators and congressmen saying, ‘If such and such happens, there’ll be blood in the street’? Where the hell are we?” Biden said, ignoring Graham’s later statement that he abhorred violence.
The President escalated his attacks after Trump unleashed a torrent of invective and reposts of conspiracy-laden material on his social media site, which, if anything tended to bolster Biden’s point. His posts were reminiscent of rhetoric interpreted by extremists as a call to arms ahead of the US Capitol insurrection. In one post Trump elevated on his social media network, a commenter wrote, “We cant (sic) let the FBI break the American spirit.”
Since the search for classified material at Mar-a-Lago, conducted on the base of a legal warrant, the bureau has reported rising threats against its premises and its agents. Biden made the fierce backlash against the bureau the centerpiece of an attempt to wrest control of an issue that Republicans have typically weaponized: law and order.
“There’s no place in this country, no place, for endangering the lives of law enforcement. No place. None, never, period. I’m opposed to defunding the police. I’m also opposed to defunding the FBI,” Biden said. In recent weeks some of Trump’s most vehement acolytes have said the bureau’s funding should be cut off.
Biden’s new offensive, which he will reinforce in a prime-time address Thursday outside Independence Hall in Philadelphia, represents one of the most significant twists of the midterm campaign yet.

In some ways, Biden’s strategy is a high-risk one — though given his overall political struggles over the last year, it may be one of his only options. For all of his references to his Republican “friends” in Congress, Biden is in danger of being seen as branding all Republican voters as extremists dedicated to “semi-fascism” — a phrase he used outside a fundraising event in Maryland last week. The President’s fierce rhetorical offensive could also destroy his reputation for moderation and his previous calls for unity, which were attractive to some voters in 2020.
And the basic dynamics of the election may be different in the country than they appear from Washington. In recent weeks, the search of Mar-a-Lago has returned Trump to the headlines. But the fact that millions of Americans are paying far more for groceries than they were a year ago hasn’t changed. Nor has the reality that after an exhausting pandemic and years of political discord, majorities of voters tell pollsters they believe the nation is on the wrong track. While the fate of America’s democracy and the way Biden says it is under threat from Trump is important, it’s an esoteric issue when compared to putting food on the table. And while there has been a significant dip in high gasoline prices that haunted the post-pandemic economy earlier this year, the damage to Biden may have been done months ago.
It’s also unclear if a hardline anti-Trump campaign will be as effective with Trump out of the White House. Last November, for example, Democrats tried to run the playbook in an off-year election in Virginia, in what came across as a lazy strategy. They paid a price when Republican Glenn Youngkin captured the governorship by stressing rising prices and parents’ concern about education after months of Covid-19 school closures.
Still, while he’s not in office, this time Trump is on the ballot by proxy given the countless candidates he has endorsed who have repeated his false claims about election fraud. There’s a reason why Republicans were desperate for him not to declare his likely 2024 presidential campaign before the midterms; he gives Democrats a foil.
And while Democrats believe that events like the Supreme Court’s overturning of a constitutional right to an abortion and some successes on Capitol Hill are also behind an improving outlook for November, it’s worth noting that their hopes of staving off a red Republican wave rose just at the moment when Trump leapt back into the political spotlight.
But Biden’s effort to claim the mantle of law and order from the Republican Party may also be a tough assignment — even if several Democratic Senate candidates are touting strong records on the issue as they try to get out ahead of GOP attacks by professing their support for the police in their own campaign ads.
There is logic in Biden’s argument that proclaiming support for the police while attacking the FBI is inconsistent. But the legacy of the “defund the police” mantra pushed by some liberal Democrats, which Biden has never supported, runs deep. In an ABC News/Washington Post poll in May, for instance, 47% of voters said they trusted Republicans to handle crime compared to 35% who had more trust in Democrats. And some of Trump’s most searing — albeit exaggerated — attacks in his midterm election stump speech hit Democrats as weak on crime, while conjuring a nightmare vision of inner cities plagued by homelessness and violence.

Why Pennsylvania is so crucial

Biden’s trio of visits to Pennsylvania in the span of a week — he’s also due in Pittsburgh on Labor Day — is no coincidence. The commonwealth was one of a handful of battlegrounds that put him in the White House. And he instinctively feels comfortable on home ground — he was brought up in Scranton, 20 miles from his Tuesday rally in Wilkes-Barre. The state’s blue collar ethos gels with Biden’s own political identity — one that helped him make inroads with working-class White voters who formed much of Trump’s natural constituency in the 2020 election.
And Pennsylvania will be critical again in November, as will be underscored by a rally hosted by Trump in Wilkes-Barre on Saturday night. The commonwealth will help tell one critical story of the coming election since Trump is backing two candidates who have, to varying degrees, repeated some of his falsehoods or raised questions about the 2020 election. Senate hopeful Mehmet Oz and gubernatorial nominee Doug Mastriano will cement Trump’s power in the GOP if they beat Democratic opponents. But they are also examples of candidates who may be either too inexperienced, too out-of-touch or too extreme to win statewide. And if they lose, they will exemplify how Trump hand picking candidates could cost the GOP power.
Oz has had a tough few weeks in his campaign against his Democratic rival, Lt. Gov. John Fetterman, who is getting back on the trail after suffering a stroke right before the May primary. Mastriano is considered the underdog in a race against Pennsylvania Attorney General Josh Shapiro for the governor’s mansion in Harrisburg.
While Biden put in one of his stronger campaign speeches Tuesday, his appearance didn’t pass without one of his characteristic verbal slips. The President appeared to mix up Fetterman and Shapiro at one point and the offices they were seeking, potentially depriving each of their campaigns a soundbite for campaign ads. Questions also remain about Fetterman’s health. He won’t take part in a September debate, he said in a Tuesday statement that alluded to some of his speech and auditory processing challenges after the stroke.
These races are far too early to call since history suggests first-term presidents typically get a drubbing in midterm elections, especially those with low approval ratings, as Biden’s is.
He has tipped above the 40% mark in recent weeks after a string of Democratic successes in Congress, including the first gun safety legislation in decades, which has also boosted the party’s hopes. The President on Tuesday billed the new law as a way he showed he could beat the National Rifle Association, though he also stressed that as the owner of two shotguns, he didn’t want to take away firearms.
Biden spoke movingly about the impact of recent school shootings and the horror of parents who had to identify their dead young children using medical records as he vowed to ban assault rifles used in many massacres.
“DNA to say ‘that’s my baby.’ What the hell is the matter with us?” Biden said.
The President showed in his speech that he is pulling out every stop to defy historic portents of heavy Democratic losses in November. And with Trump’s furious reemergence and a good spell in Congress, he has far more to work with than he had even six weeks ago. But that doesn’t mean it will be enough.
This article was originally published by Einnews.com. Read the original article here.
You Might Like